What is the use of a helium tank in this very early space suit design?

The answer to this question included this image from a book by Wernher von Braun he wrote in 1960. 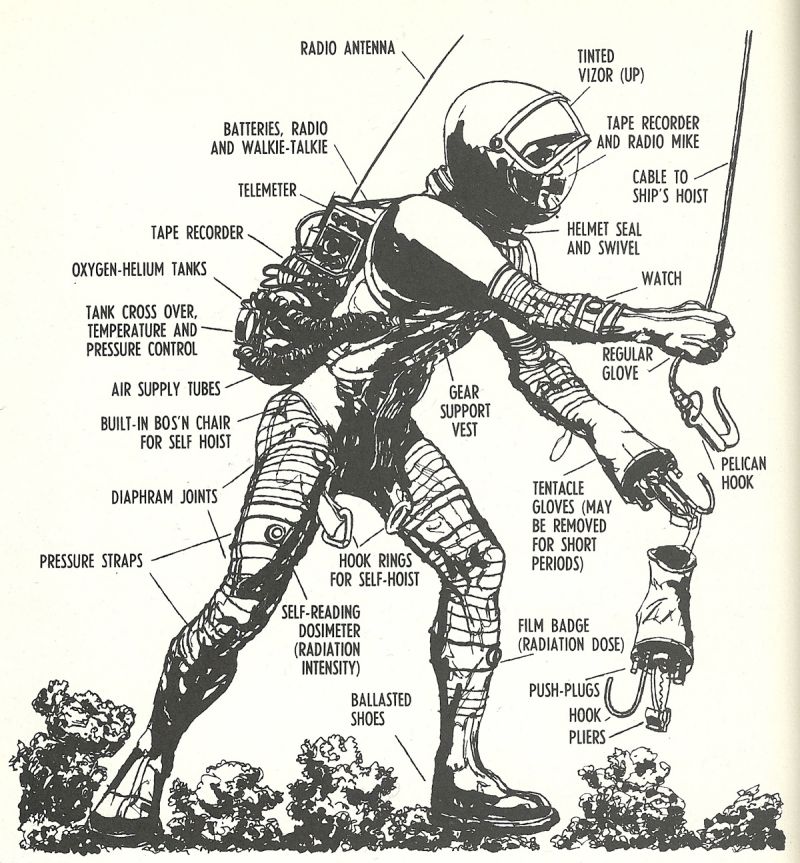 This space suit design misses a micro meteroite protection as well as liquid cooling to remove excess heat and a scrubber to remove exhaled CO2.

But what are helium tanks used for? Diluting oxygen with an inert gas like nitrogen or helium is only necessary for a very high suit pressure in the range from about 0.5 to several bar. Using helium instead of nitrogen to avoid nitrogen narcosis may be necessary for pressures about 5 bar and more.

For a suit used in a vaccuum environment a pure oxygen atmosphere with a low pressure of about 0.4 bar is much better when using regular gloves. A suit with low pressure is much more flexible.

A first guess would be that in the author's idea, Oxygen would be used to pressurize the helmet and meet the Astronaut's metabolic needs, and Helium to pressurize the spacesuit. That would be a terrible design though, at least concerning insulating properties : thermal conductivity of Helium is very high (152 mW/m/K) compared to Oxygen (23,4 mW/m/K) or some rare gases used in technical diving like Argon (17,7 mW/m/k). Conducting Extra-Vehicular activities in such conditions would be extremely demanding for the temperature control system which would be easily overtaxed.

As you raised it in your question I suppose that you are familiar with Lorrain-Smith hyperoxia-toxicity effect : an extended exposure to an oxygen partial pressure over 0,5 Bar leads to pulmonary inflammatory lesions. It is possible that the author, although he was familiar with this very specific effect, was not familiar with the possibility to conduct EVAs with a spacesuit pressurized under the atmospheric standard pressure. Although this is unlikely, this misconception could have led him to imagine the use of Helium to reduce ppO2 below 0,5 Bar in the spacesuit.

Here is my suggestion : pressurizing the suit with Helium is a way to get rid of the pre-breath protocol currently used by our Astronauts in ISS sas QUEST. Explanations :

Please note that this is only a mental experiment: a spacesuit pressurized at 1 bar would lead to numerous other problems, for example the stiffness of the joints.

Not the answer you're looking for? Browse other questions tagged spacesuits helium or ask your own question.

5
What would happen if you wore 'soft suit'(IVA suit) in the vacuum of space?
1
Does the Falcon Heavy also use a helium system?
27
What does “double vacuum pressure” mean in space-suit testing?
10
What ever happened with that pressure suit design based on elastic tension in contact with skin?
3
Apollo suit atmosphere before launch?
3
How will the future Mars Space Suit Helmet design protect Astronauts from Martian Radiation?