How do flags behave on the Moon?

I have seen many theories and question/answers on this site touching upon this subject but no focused question. So I would like to ask this as a two part question.

Is what we saw in the Lunar landings videos, the expected behaviour of a flag on the Moon and how should we expect a flag to behave on Mars - if/when we get there ?

Since I am sure you're not denying the authenticity of this video, let us turn your question another way: why is the flag behaving this way ?

The flag is roughly subjected to 3 forces :

Pushing the flag into the ground, Armstrong gave it an initial momentum, and the flag was then only subjected to those three forces in the nearly vacuum of space. Please note it is a very classical physical situation: what we have here is a pendulum with a mass (the fabric) a tension (the fabric is attached to the rod), a fixed part (the rod), and an initial velocity. What many have wrongly interpreted as some wind proving the scene would have been recorded on Earth is just the oscillation of this pendulum. Such a scene is impossible on Earth since with such a low mass as a pendulum, friction forces from the atmosphere added to the other three force would impede any oscillation movement.

Now about Mars. Friction forces on the flag from the atmosphere mentioned above are proportional to the mass density of the fluid and the square of the speed of the flow. On Mars, the pressure and therefore the mass density of the atmosphere is so low that friction forces on the flag would be almost zero, except with an extremely fast flow, for example during a storm. So it would be pretty much like on the Moon. On the other hand gravity is 2.3 times that on the Moon, which would amplify the oscillation phenomenon. All in al, the flag would behave approximately the same way.

For a more casual answer to this question--The Mythbusters built a replica of the lunar flag assembly. In a vacuum chamber they moved it around to see how the flag behaved in a vacuum.
Dailymotion video 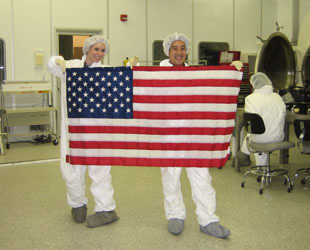 Not the answer you're looking for? Browse other questions tagged the-moon apollo-program landing atmosphere lunar-landing or ask your own question.

15
How big of a problem is the Lunar eclipse in April 2014 for LADEE?
45
Why is an airbag landing on the moon not viable?
9
Exit film of moon landing departure
42
Was planting UN flag on Moon ever discussed?
4
Single Engine versus Multiple Engines for Moon Landing
6
How long could an oxygen/nitrogen atmosphere last on the Moon?