How will Juno establish existence of solid core within Jupiter and determine its size?

One of the set goals for NASA's New Frontiers Juno mission is studying Jupiter's interior and determining if this gas giant has a solid core and if, how large it is. This is mentioned several times on NASA's Juno page, for example:

Juno will measure the amount of water and ammonia in Jupiter's atmosphere and determine if the planet actually has a solid core, directly resolving the origin of this giant planet and thereby the solar system. By mapping Jupiter's gravitational and magnetic fields, Juno will reveal the planet's interior structure and measure the mass of the core.

But assuming Jupiter does indeed have a solid core, how will the size of it be established? Will this be down to statistical data from its vector magnetometer (MAG) and determining where the magnetic reconnection occurs? Or by any other means?

Using gravity to remotely look at the hidden interior of a planet or moon has a remarkably long history. The idea goes back to Newton. He suggested measuring the divergence of a plumb bob near a mountain from the surveyed normal as a means of assessing the mass of the Earth. He dismissed this idea as impractical given the low quality of surveying measurements at that time. It didn't take long for surveying techniques to improve. While surveying the Mason-Dixon Line, Charles Mason and Jeremiah Dixon noted measurable deviations of a plumb bob from surveyed normal. Mason later helped select a mountain that could be used to "weigh the Earth". The end result was the 1774 Schiehallion experiment (http://en.wikipedia.org/wiki/Schiehallion_experiment), which gave a result within 20% of the current value.

The modern day successors to the Schiehallion experiment includes a number of satellites used to measure the gravity fields of the Earth, the Moon, and several of the planets. These satellites continue the work of Schiehallion experiment in giving insights into the internal makeup of these bodies. Some of these satellites (e.g., GRACE and GRAIL) had gravity observations as their sole job. Many others had gravity science as one of many experiments. For yet others such as the PFS-2 launched by Apollo 16 (http://science.nasa.gov/science-news/science-at-nasa/2006/06nov_loworbit/), discovering weirdnesses of gravity was rather unintentional.

Gravity experiments give a somewhat muddled view of the interior. It helps (a lot!) to have alternate sources of data. Juno scientists will use both the gravity results and the magnetic field measurements to get an idea of what Jupiter's interior looks like.

Turns out the way they're going to do that is quite a bit different than my initial thoughts, all neatly explained by Bill Nye in one of his Why With Nye videos he did for NASA's Juno mission: 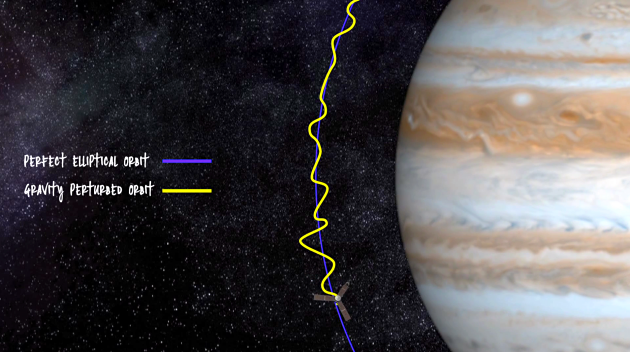 Gravity perturbed orbit of the Juno spacecraft as it orbits planet Jupiter (video: Bill Nye Asks Does Jupiter Have A Core?)

The video is quite fun, so click on the image above and all will be revealed. For the textophiles among you though, the explanation goes like this:

We don't know what's inside Jupiter. Jupiter could have a core made of heavy metal, that's sunk to the center. Or it might be, that Jupiter has this exotic material that's hydrogen, squeezed under such a pressure, that the hydrogen acts like a metal. Metallic hydrogen. Now, we can't cut Jupiter in half. We don't have that capability. Instead, we have a happy little spacecraft in orbit around Jupiter.

Now, as it orbits, we strongly believe there will be slight variations in its path due to tiny variations in the gravity of Jupiter. And that will help us figure out what's inside. Now, how would we measure the tiny variations of the orbit of a spacecraft around a great big planet, millions of kilometers from here? We would do it by measuring the frequency of radio waves. Radio waves coming from the spacecraft, and radio waves coming from Earth. We can measure those variations using the Doppler effect.

So, we believe that precisely measuring the path of Juno as it orbits Jupiter, using the Doppler effect, we'll be able to determine from Jupiter's gravity the nature of what's inside. Is it heavy metal? Is it metallic hydrogen? Or is it ...

Not the answer you're looking for? Browse other questions tagged nasa planetary-science magnetic-field jupiter juno or ask your own question.

14
How do spacecraft measure onboard gravity?

18
Why does NASA's Juno spacecraft only have a one year primary mission?
4
Will there be joint observations from earth and the Juno spacecraft when it reaches Jupiter?
15
Will Juno record its deorbit?
13
What are the implications if Juno finds that Jupiter has a solid core?
2
Why would Juno's originally planned orbit lowering partially mitigate radiation damage?
3
If Juno's long orbit means a lower rate of radiation damage, why the planned short orbit?
3
Better understanding of the "Rivers of metallic hydrogen" in the atmosphere of Jupiter?
2
How, and How Well will Juno measure the effects of frame dragging? (GR effect due to Jupiter's mass & rotation)
4
How does not orbiting Europa maximize Clippers coverage of Europa for a given radiation dose?
4
Why must "Mercury’s core (be) partially molten" to explain its weak magnetism?