Could the Lunar Rover jump start the Lunar Module in an emergency?

In Scott Manley's video Why Lunar Landers Had Jumper Cables For Emergencies he describes the "LOSS OF ED [Explosive Device] SUB-SYSTEM" procedure, which includes the use of a jumper cable called the "ED Adapter Cable" that draws power from the Descent Stage.

He poses the question; if required, could the Lunar Roving Vehicle have been used instead?

Note you can find the "LOSS OF ED SUB-SYSTEM" procedure in the Apollo Operations Handbook; Lunar Module; Volume II, it's the last procedure, on PDF Page 929

I don't think that cable is for power. Before launching from the moon, the explosive device (ED) subsystem performs three tasks:

The problem is that if something accidentally severs the umbilical first, you might not be able to perform #2 and lift off. That's why they included the emergency cable. The procedure you cite connects the controls in the cabin with the ED relay box on the descent stage. Then you blow the bolts, disconnect the cable and toss it out the hatch, close the hatch, and take off. 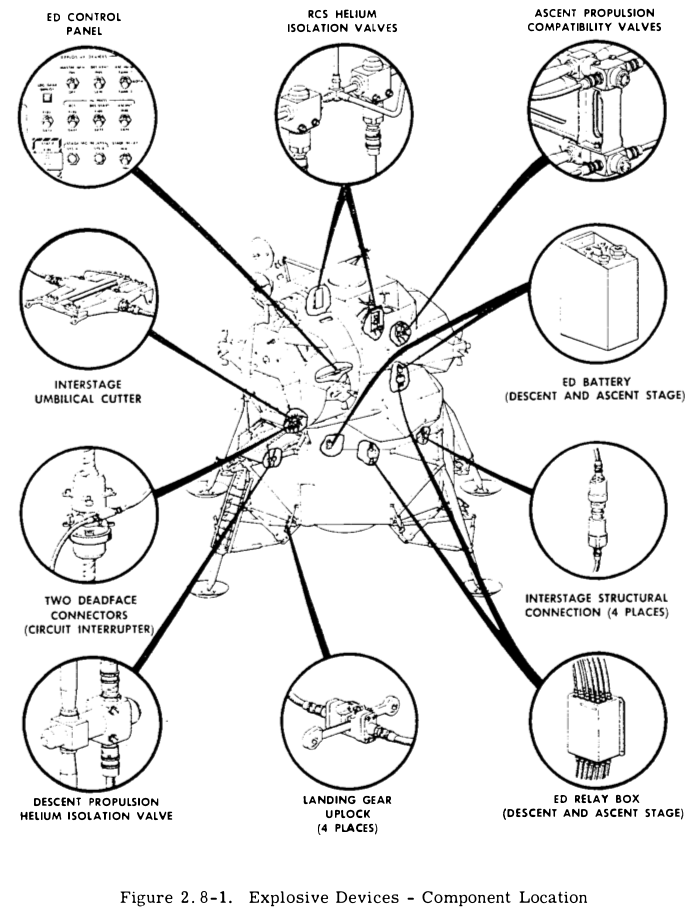 Taking the question literally, could the rover batteries replace an ED battery? Perhaps:

Yes, but it would have been really tense to do so. A good summary of the document that describes the procedure in detail is here. That page also links to a lunar module operations manual that it summarizes. Here's the way it was supposed to go down:

On the assumption that, for some reason, the ascent stage engine and explosive bolts etc. couldn't be activated by the ascent stage, the astronauts had no choice but to do things on EVA.

There were then two procedures that had to be followed, with the first procedure being deemed safer and easier.

The first procedure would be to attempt to use the LM's descent stage batteries and a jumper to do what could be described as absurd: rush out the LM (remember, you only have thirty minutes and, if this procedure failed, you have to use the rover) and attach the jumper to one of the descent stage batteries. Leave the cabin unpressurized. Launch, and when you're done the burn collect the cables that are now dangling out of the LM and finally close the hatch.

The second procedure would be followed if the first failed. This involved going to find the rover (rapidly), and then using it as a jump starter just like the descent stage battery.