What was the exact nature of the observations of “solar flare activity” that delayed the launch of Vostok 5?

The interesting story of Vostok 5 recounted in Encyclopedia Astronautica's Vostok 5 (linked in comments below this answer) includes the following passage:

Vostok 5 was originally planned to go for a record eight days. The launch was delayed repeatedly due to high solar activity and technical problems. Finally the spacecraft ended up in a lower than planned orbit. Combined with increased atmospheric activity due to solar levels, Vostok 5 quickly decayed and temperatures in the service module reached very high levels.

Several delays plagued the prelaunch preparations of Vostok 5, the biggest being concern over elevated solar flare activity. At this early phase, it was not well understood what effects this might have on the spacecraft and its passenger, so the planned launch date of 11 June was postponed a few days.

What was the nature of the "solar flare activity" that was actually observed? I am not sure what the state of the art of solar observations were in June of 1963. Were there spectrographic images showing flares on the disk of the sun pointed towards Earth? Elevated X-rays detected by a satellite in space? Increased auroral activity?

Start was scheduled for June 11th. But on this day, "Vostok-5" did not go into space. The prognosis came: powerful solar flares are expected, at which the radiation dose may exceed the dangerous X-ray threshold. The start was appointed both on June 12 and June 13, but the specialists of the Sun Service did not give the go-ahead. Finally, on June 14 (again on Friday) the Sun calmed down, and the state commission decided to launch. (Article "Unknown details of one delayed space launch". "Trud" newspaper. May 13, 2016 )

When the spacecraft went into orbit (181x235 km, 65 °, 88.4 min), it turned out that its height is significantly lower than the calculated one. The guaranteed time of existence of the spacecraft was only 10-11 days, but this is calculated. In reality, it could turn out that already on the 8th day the ship spontaneously “closes” into the atmosphere and makes an uncontrollable descent. There was a serious possibility that flight for eight days would be impossible.

Results of the flight: Successful prediction of solar activity and constant monitoring of it, the appropriate choice of orbits and the precise launching of spacecraft into predetermined orbits, along with special measures of protection from radiation exposure, led to the total radiation dose received by Valery Bykovsky equal to 35-40 millirads. All flights of "VOSTOK" spacecrafts

What was the exact nature of the observations of “solar flare activity” that delayed the launch of Vostok 5?

The study of the Sun and the prediction of space weather was done by the Soviet Service of the Sun ("Служба Солнца").

The Soviet Service of the Sun is relatively young. It was organized in 1932 by the Commission for the Study of the Sun of the Astronomical Council of the USSR Academy of Sciences and was initially limited to observations of the solar photosphere. In the post-war years, the range of its observations expanded considerably and now covers all layers of the solar atmosphere.

The current service of the Sun makes extensive use of all the latest achievements of astronomical instrument making. Photography, film and radio have taken a firm place among its means of observation. Space-based observations are made, albeit sporadically. And only in some cases, solely for the sake of preserving the system, they continue to use eye-estimations.

The most widely used by our solar observatories is the photosphere chromospheric telescope.

For photographing the chromosphere of the Sun in the rays of the violet line of ionized calcium, instead of the photosphere-chromospheric telescope, another tool is used - the spectroheliograph.

A special device is required to measure the magnetic fields of sunspots. For this purpose, special nozzles for spectrographs of horizontal or tower solar telescopes are used.

For the most complex observations of the solar corona, extra-dark coronagraphs of the system of the French astronomer B. Lyot are used.

Finally, for observing the radio emission of the Sun, mainly small radio telescopes with dish-shaped antennas with a diameter of 2–3 meters and receiving devices for different wavelengths are used. The Crimean Observatory directs observations of the magnetic fields of spots and solar flares. The Astronomical Institute of the Academy of Sciences of the Uzbek SSR is the main station for observing fibers, so-called fast processes, i.e., violent changes in prominences and fibers.

If at the beginning of the 1950s the predominant part of the USSR Sun service stations was located in the European part of Soviet Union, now they are spread from Lviv to Ussuriysk. About a third of these observatories are located in Central Asia, in the Urals, in Siberia, and in the Far East.

Nowadays, the observatories of many socialist countries successfully cooperate with us: Hungary, the German Democratic Republic, Cuba, Mongolia, Poland, Romania, Czechoslovakia. This greatly expands the possibilities of observing solar flares and bursts of radio emission at later hours of the day, and also allows a significant increase in the number of days with corona observations and measurements of the magnetic fields of the spots.

Article "On the history of the Ussuri astrophysical observatory and its role in space exploration".

Ussuriysk is directly related to the development of cosmonautics in our country, since it is in the Ussuri urban district, in the village of Gornotaezhnoe, the only astrophysical observatory of the Far East Branch of the Russian Academy of Sciences is located in the Far East. For a number of years, the staff of the observatory made observations of the nearest space specifically for the space programs of our country, monitored the level of solar activity, and gave recommendations about the time of planned launches.

The Ussurian Astrophysical Observatory was created in 1953 as a station of the Sun Service for regular observations of the Sun and solar activity.

By 1957, the station, thanks to the good geographical location and high quality of the data, was firmly established in the network of astronomical institutions. And when the country began preparations for the largest program of geophysical and cosmophysical observations and research in the International Geophysical Year, it was decided to develop observations in the Far East. Funding was allocated, so 1957 can rightly be considered the year of the formation of the Ussuriysk Solar Service Station.

For several years, the station began to grow rapidly: in 1958 a laboratory building with an area of 60 square meters was commissioned, regular observations were started on a radio telescope, and in 1961 the ACU-23 horizontal solar telescope was mounted, which a year later observations of solar spectra were started spots and flashes.

The next period of rapid growth of the station began in 1971, after the arrival of the President of the USSR Academy of Sciences Mstislav Keldysh to the observatory. Assessing the prospects of astronomical observations, he allocated at that time a huge amount: 860 thousand rubles for the construction of scientific and household objects, the acquisition of equipment.

In 1970-80, we worked on the Soviet cosmonautics very much. Since the sun influences very strongly both on the Earth and on the near-Earth space, there is no protection in orbit for spaceships or cosmonauts. Special telegrams were sent to us, according to them we began to work in a certain mode. Everything we shot was immediately processed, worked like in the army. There was even a case when the spaceship was immediately removed from orbit due to the data obtained. A big plus of our Far Eastern Observatory is that we are the most eastern, so we had the earliest data. In addition, spring, autumn and winter in Primorye are very good for observations in terms of weather conditions, which cannot be said about the European part of USSR. Therefore, our observatory was very important. 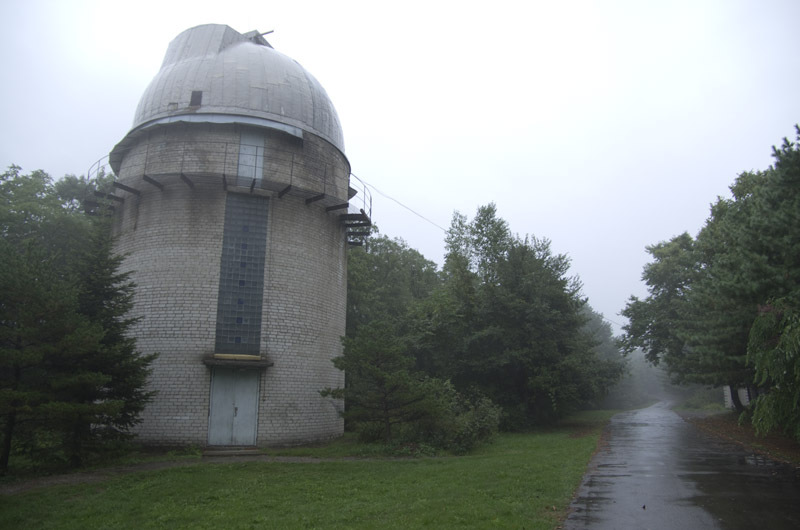 Not the answer you're looking for? Browse other questions tagged atmosphere radiation atmospheric-drag solar-flares or ask your own question.

18
How did the Vostok ejection seat safely eject an astronaut from a sealed space capsule?

9
What is the closest to Earth you can expect lift from a solar sail?
5
What is the probability that a deep space crew is hit by a Solar proton storm?
4
What is the lowest altitude that an ion thruster can be used for station keeping?
6
What data was used to estimate accumulated radiation dose for the Apollo astronauts?
2
What are the differences between various solar weather terms?
10
what happens to particles that escape the atmosphere on planets in the solar system?
3
If a solar flare happened during a total lunar eclipse, would the Earth block the flare from hitting the moon? And for how long?