What was the Shuttle Carrier Aircraft escape tunnel?

The Wikipedia article for the Shuttle Carrier Aircraft mentions an escape tunnel:

The avionics and engines were also upgraded, and an escape tunnel system similar to that used on Boeing's first 747 test flights was added. The flight crew escape tunnel system was later removed following the completion of the Approach and Landing Tests (ALT) due to concerns over possible engine ingestion of an escaping crew member.

Addressing the "Are there pictures?" part of the question. 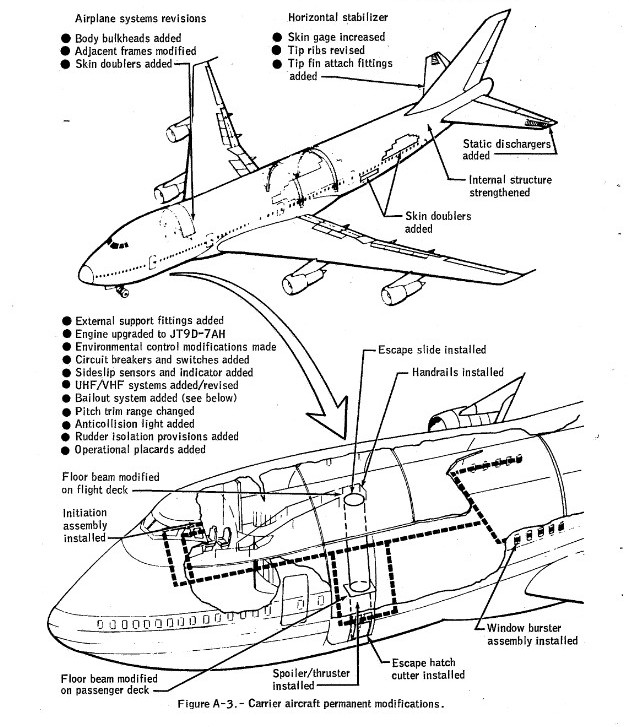 It was on the airplane, not the shuttle, see this NASA article:

A crew escape tunnel was installed aboard NASA 747 aircraft number 905 (NASA 905) during the aircraft's modification process for the Shuttle program. The tunnel extended down three decks, from the flight deck to the bottom left side of the fuselage. In a catastrophic emergency, the parachute-clad pilots and flight engineer would activate explosives that would blow a hole through the fuselage for bail-out. Next, they would slide down and out the hole, escaping into the air below the airplane. Activation of the tunnel hole explosives also activated pyrotechnic devices designed to blow out 10 windows above each wing in order to equalize the on-board air pressure allowing the crew to slide down the tunnel. However… this escape system might have led into the inboard engine inlet, obviously not a good thing! The escape tunnel system was removed from the aircraft following completion of the Space Shuttle Approach and Landing Tests (ALT) project.

The shuttle Enterprise was used for the atmospheric ALT, it had ejection seats for the crew. There was no way to get between the SCA and the shuttle.

16
What's inside NASA N911 Shuttle Carrier Aircraft (SCA 747)?
98
Is this “Attach Orbiter Here / Note: Black Side Down” sign on the Shuttle Carrier Aircraft real?
3
What was the purpose for which the shuttle mockup Explorer aka Independence was constructed?
8
How was Enterprise held/released from the carrier 747 for the Shuttle approach and landing tests?
7
At what point was nose wheel steering “added” to the Space Shuttle design?
31
How was the Shuttle loaded and unloaded from its carrier aircraft?
14
Did the Shuttle's rudder or elevons operate when flown on its carrier 747?
6
What was the operational lifetime of a shuttle tile?
22
Was the Space Shuttle always crewed?