Are the APUs on the SLS SRBs planned to be hydrazine powered?

I recently read that the Space Launch System core stage, which uses renamed / slightly reworked Space Shuttle Main Engines and therefore requires a hydraulic system to service said engines, will use Shuttle Auxiliary Power Units (APUs) with a helium / hydrogen gas system instead of hydrazine to drive the hydraulic system. They call them CAPUs. ("Core" APUs)

That prompted this question:

Thrust vectoring of the nozzles on the Space Shuttle Solid Rocket Boosters (SRB) was powered by two redundant Hydraulic Power Units (HPU) in each booster. The HPUs were basically Shuttle APUs and hydraulic pumps and were powered by a hydrazine monopropellant system that provided hot gas to spin a turbine.

Now, before the STS-107 Columbia failure, work was in progress to replace the toxic hydrazine fuel system in the HPUs with high-pressure helium bottles that would blow down through the turbine. A plausible solution for the short SRB flight time.

So, will the SLS SRBs use hydrazine to power their hydraulic systems, or a greener alternative?

According to this Spaceflight101.com article SLS Solid Rocket Booster to be fired up for Final Qualification Test , the HPUs are still hydrazine powered.

The SRBs host their own hydraulic power units fueled by hydrazine that drives a turbine powering a hydraulic pump to provide working pressure to the two servoactuators that gimbal the nozzle by +/-8 degrees to provide thrust vector control as commanded by the flight computer. Two HPUs are installed on each SRB aft skirt to provide redundant TVC capabilities. 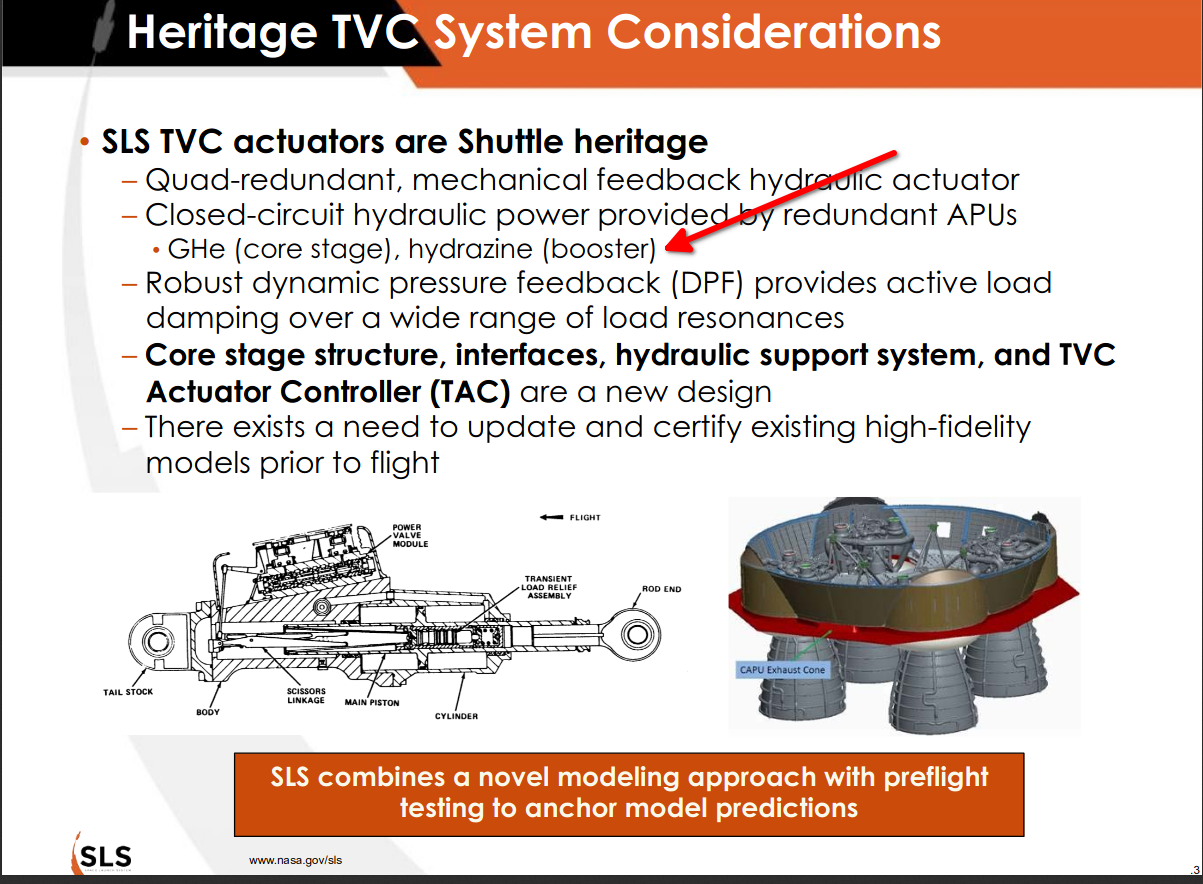 Not the answer you're looking for? Browse other questions tagged fuel sls srb hydrazine or ask your own question.

7
How will the SRBs used by the SLS differ from those used by the Shuttle?
10
Why were Solid Rockets chosen for the SLS
9
Can the SLS reuse its solid rocket boosters?
14
What are the differences between SLS and Ares V?
4
How are SLS SRBs considered man-rated?
6
Could the SLS reach orbit without solid rocket boosters?
5
Did the shuttle SRBs have separation motors?
4
Does the volume of hydrazine propellant stored at 22 bar change?
2
Could Four SRBs Be Stacked on SLS, Thereby Generating 17.9 Million LLBs Thrust at Liftoff