What do astronauts eat for pre-flight breakfast?

I’m currently reading W. David Wood’s rather excellent “How Apollo Flew To The Moon” which details the technological development and execution in reaching the moon with the Apollo program.

Part of the book details that the flight crew ate a “low residue” breakfast before boarding the Saturn V launch vehicle, but didn’t expand on this.

So, what did the Apollo astronauts eat for breakfast and what were the special considerations for making that choice?

How are pre-flight meals different in the modern age of manned space flight?

The traditional astronaut pre-flight breakfast is steak and eggs, with juice, coffee, and/or tea, and possibly toast. This is what Alan Shepard ate (bacon-wrapped filet mignon, allegedly, and scrambled eggs) before his first Mercury sub-orbital flight, and the tradition has continued since.

Steak and eggs are high in protein, low in carbs and fiber, which is what you want for "low residue" -- i.e. minimizing bowel movements.

Prior to Shepard's flight, this was a standard choice for jet pilots assigned to long solo flights, where there was no option to leave the cockpit to use a bathroom. Early astronauts would try and keep to a similar high-protein low-residue diet for a few days prior to the flight as well as the preflight breakfast.

Shepard's flight was quite short, so his choice was probably made out of personal preference or habit rather than on the basis of low residue (though he did, famously, have to urinate in his flight suit after several hours of delays on the launch pad).

In the shuttle and post-shuttle era, with actual toilets available, astronauts have more options, and can pretty much ask for whatever they want for their pre-flight breakfast -- for example, lobster and baked potato -- but many stick to the steak-and-eggs tradition. Often, astronauts' pre-flight stress prevents them from enjoying the meal. In his book Riding Rockets, Mike Mullane says, of the STS-41D crew, "most of us ate nothing or very lightly. I had a piece of toast".

The traditional breakfast of Russian cosmonauts, according to Robert Frost of NASA, is boiled eggs, mashed potatoes, bread and butter, and tea. The breakfast is followed by a small champagne toast.

3 months before the launch to ISS, the cosmonauts begin to eat serious space food, choosing which products they would like to see in orbit. 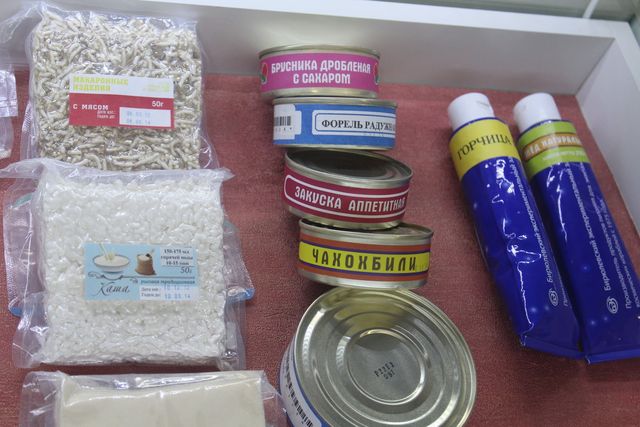 37
Are there any vegetarian astronauts?
5
Did any Apollo astronaut remain disrobed to simplify his waste disposal? $\;$
3
Does space sickness determine when astronauts have their last meal?