Where can I find Captain REFSMMAT?

Ed Pavelka was one of the flight controllers who occupied the FIDO console at mission control. As a way to cement the esprit de corps among the flight dynamics team, he invented a fictional character "Captain REFSMMAT" who represented the idea Flight Controller. A series of posters were drawn, including the captain's arch enemy Victor Vector.

I have a reproduction of one of those posters in a book I'm reading, but I can't see any reproductions of this or other posters in the series on the internet.

Does anyone have a link to any of these posters, as I'm sure they'd be an interesting insight into the personnel at mission control in the Apollo days. 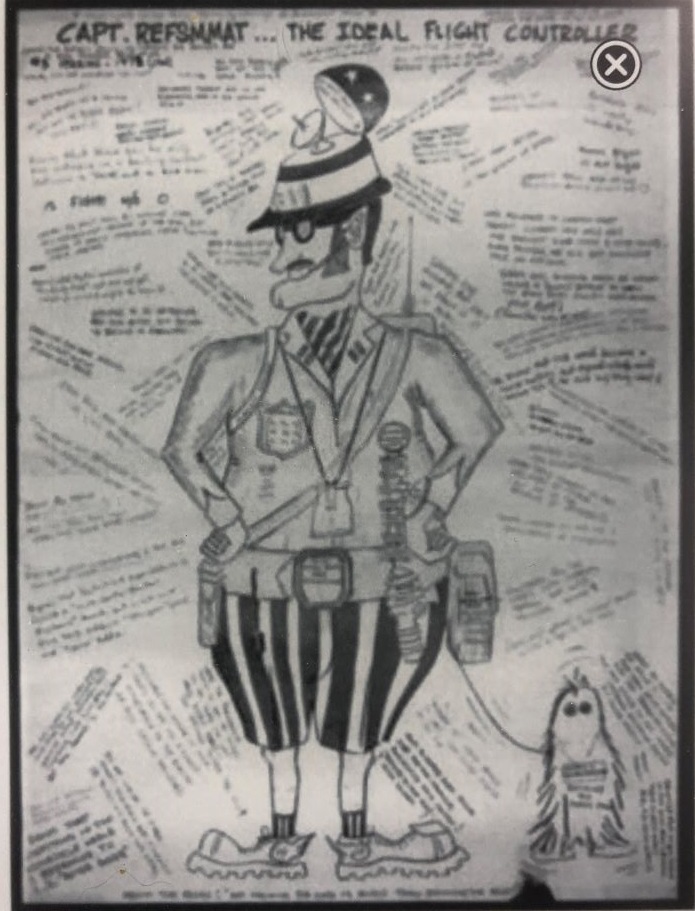 (Screencap from my Kindle - originally in "How Apollo flew to the Moon" by W. David Woods)

Sources are from Ed Pavelka's oral histories in April and May 2001.

The idea came up when Flight Director Gene Kranz asked Pavelka for a way to improve morale:

Gene Kranz thought in the military way about the morale of his troops, so to speak, and he wanted a way that he could kind of raise the morale. So he talked to me about something that we might be able to do that would be a way to get the esprit de corps, get the people really up and help the team spirit. So I came up with a number of sketches and we ended up with Captain REFSMMAT.

So he [Kranz] and I had several meetings, and we talked about different ideas, and we came up with the idea of Captain REFSMMAT would be sort of the ideal flight controller.

Pavelka started with a drawing:

So I made several sketches just on desk pads, as you can see here. It's really nothing but a sketch in pencil. In some of the later ones, I actually outlined them with markers so they showed up better, but this was the first one.

Other people would come by and add their own comments to the drawing:

So it was a way, in a humorous way, for people to put stuff down. Other people would come by and visit at lunch and they would look and write their little thing down. So it was a way to have a little bit of fun, let people blow off a little steam. Sometimes if someone would get upset about something, there would be a little comment on there about that. But that was a fun part of the thing.

When the drawing was filled up, he would make a new one. The process lasted 5-6 years:

So that was kind of where Captain REFSMMAT—and that spanned a period of maybe over five or six years, maybe longer. We just left them up until people wrote so much on there that they wouldn't last any longer, and I would sketch up a new one just on a desk pad and put it up out in the hallway on a side of like a supply locker, and people would go by and write their stuff on it.

Some of the topics covered in the cartoons:

Back then, and a lot of people remember this, but the Fugitive, the original Fugitive movie with the one-armed man and all that, well, the very first Captain REFSMMAT has quotes, like, "He knew the one-armed man did it." It had all kinds of little things that were in at the time. Twiggy, the skinny model, was in. There was comments about Twiggy on there.

For example, down in Alvin there was a saloon down there that [John S.] Llewellyn [Jr.] liked to go to. I forget the name of it, but they had a buffalo down there named Buster. So one of the entries on here is "Viva Buster." There are all kinds of little things that mark the time that we were in.

There were probably six made. And Captain REFSMMAT had a nemesis!

This one was the number one issue in the Captain REFSMMAT series, and we actually had, I believe, six, and then one Victor Vector that was his arch rival.

Captain REFSMMAT served his purpose for probably a period of maybe four or five years with the different editions that we had. Then it just sort of faded away. There weren't any big, strong requests to make another one, so we just let it kind of die a natural death. That was the way it ended.

Pavelka no longer has the drawings:

Well, Ron Epps has both the Captain REFSMMAT and the logs, either that or someone in his organization.

You should be able to find at least one drawing in Kranz' autobiography:

This is out of Gene's book, Failure Is Not An Option. We actually had six of them in all, and this photo here is not a very good photo, but it shows beginning where my finger is over here, the very first one and there's a progression of them, the last one is actually not Captain REFSMMAT. On your far right, the last one is actually Captain REFSMMAT's arch enemy, Victor Vector.

Unfortunately, the oral histories do not include pictures.

202
Can I borrow a lunar rover?
21
Where were the various Apollo Lunar Modules (LMs) discarded?
1
Where do the crew sleep on the ISS? Where are the sleeping quarters?
6
Where can I find flight manuals (not familiarization manuals) from Project Gemini?
8
Where does space travel rank in per-passenger-mile safety?
6
Can I find detailed flight parameters of some space mission(s)?
4
How closely can ground control monitor ISS astronauts?
12
Where are the Apollo forward heat shields currently located?
9
Are there any close-up photos of the screens used in the MOCR2 from the Apollo era where text features can be distinguished?