There are some really beautiful photos in Ars Technica's NASA’s restored Apollo Mission Control is a slice of ’60s life, frozen in amber

One of them shows the display of a map of the moon with the Lunar Module near the Sea of Tranquility and the Command Module to the west in a near-equatorial orbit.

There are some locations indicated with prominent numbers. 5 is near the Ocean of Storms to the west, and 4, 3, 2, 1 move eastward with 2 just above the LM.

They do not fall in a straight line nor seem to follow the current CSM orbit.

Question: What do these numbers indicate? 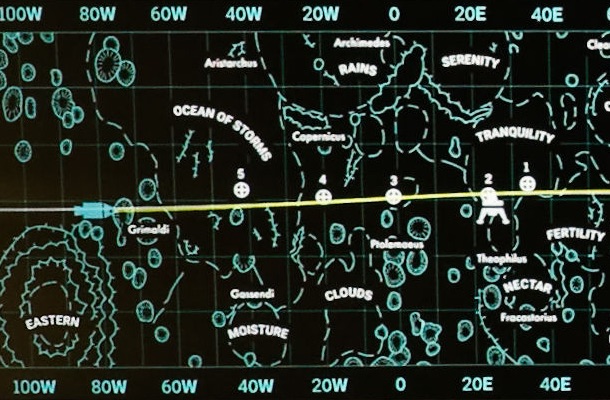 Standing at the top row of the MOCR looking forward. The consoles are all lit via internal LEDs powered by a Crestron commercial lighting system, and the positions are all dressed to appear as if the controllers had all gotten up mid-shift and walked out and left all their stuff behind. - Lee Hutchinson 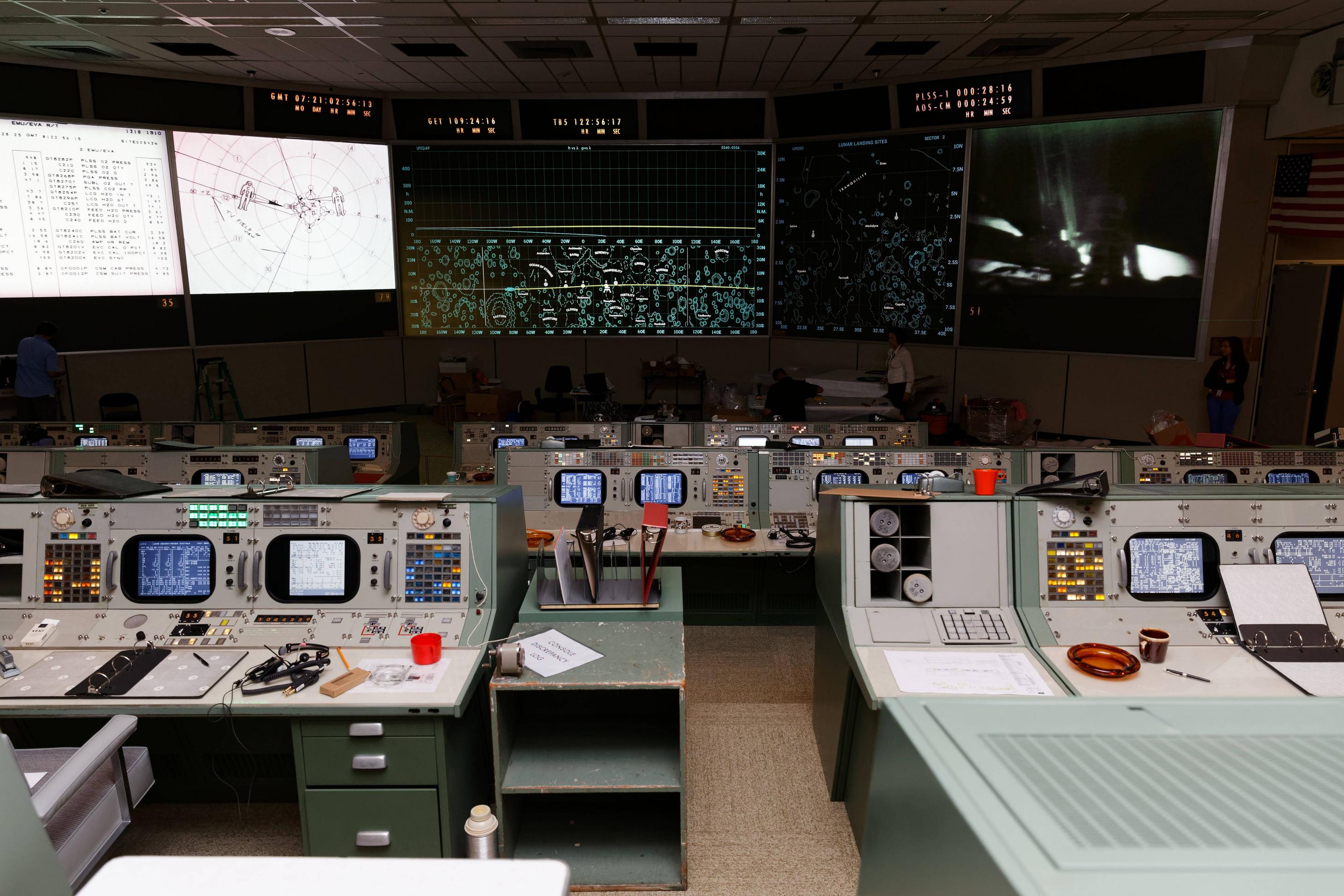 They mark the candidate landing sites for the mission.

According to Wikipedia, five sites were considered for the first moon landing:

Sites 1 and 2 were in the Sea of Tranquility (Mare Tranquilitatis); Site 3 was in the Central Bay (Sinus Medii); and Sites 4 and 5 were in the Ocean of Storms (Oceanus Procellarum).

The Apollo Site Selection Board selected Site 2, with Sites 3 and 5 as backups in the event of the launch being delayed. In May 1969, Apollo 10's lunar module flew to within 15 kilometers (9.3 mi) of Site 2, and reported that it was acceptable.

Apollo 11 landed at site 2; this is where the LM marker is on the display.

It seems somewhat surprising to me that all 5 site markers would remain on the display after the launch of Apollo 11, since they would be all but committed to site 2 if they launched on schedule.

This article describes the landing sites a bit; there's definitely an inconsistency with the locations of site 4 and 5 here, but it's exacerbated by the sites being marked on a spherical projection instead of a flat projection.

NASA's Apollo Site Selection Board announced five potential landing sites on February 8, 1968. These were the result of two years' worth of studies based on high-resolution photography of the lunar surface by the five unmanned probes of the Lunar Orbiter program and information about surface conditions provided by the Surveyor program.[68] The best Earth-bound telescopes could not resolve features with the resolution Project Apollo required.[69] The landing site had to be close to the lunar equator to minimize the amount of propellant required; clear of obstacles to minimize maneuvering, and flat to simplify the task of the landing radar. Scientific value was not a consideration.[70]

Areas that appeared promising on photographs taken on Earth were often found to be totally unacceptable. The original requirement that the site be free of craters had to be relaxed, as no such site was found.[71] Five sites were considered: Sites 1 and 2 were in the Sea of Tranquility (Mare Tranquilitatis); Site 3 was in the Central Bay (Sinus Medii); and Sites 4 and 5 were in the Ocean of Storms (Oceanus Procellarum).[68] The final site selection was based on seven criteria:

The site needed to be smooth, with relatively few craters; with approach paths free of large hills, tall cliffs or deep craters that might confuse the landing radar and cause it to issue incorrect readings; reachable with a minimum amount of propellant; allowing for delays in the launch countdown; providing the Apollo spacecraft with a free-return trajectory, one that would allow it to coast around the Moon and safely return to Earth without requiring any engine firings should a problem arise on the way to the Moon; with good visibility during the landing approach, meaning that the Sun would be between 7 and 20 degrees behind the LM; and a general slope of less than 2 degrees in the landing area.[68] The requirement for the Sun angle was particularly restrictive, limiting the launch date to one day per month.[68] A landing just after dawn was chosen to limit the temperature extremes the astronauts would experience.[72] The Apollo Site Selection Board selected Site 2, with Sites 3 and 5 as backups in the event of the launch being delayed. In May 1969, Apollo 10's lunar module flew to within 15 kilometers (9.3 mi) of Site 2, and reported that it was acceptable.[73][74]

Sites 4 & 5 on the display aren't quite as far west as stated above, but everything else fits.

17
What are these enclosed regions on the Mission Control Center map?
7
What does the ISS Mission control center do?
2
CAPCOM Console at Mercury Control Center; what does "Desired Retrofire Setting" time display mean?
5
How do these Apollo mission control displays work?
6
Apollo Mission Control Room 2, how do these decimal number displays work?
4
Where are these historical IBM + Apollo related locations within NASA? What do these computers do?
1
What do all these vectors point to in this New Horizons trajectory/operations simulation?
4
Has a fire alarm/emergency at mission control interrupted operations?
3
What JPL laboratory is this exactly, and what are the functions of these amazing-looking control panels?