How did sloshing prevent the Apollo Service Module from moving safely away from the Command Module and how was this fixed?

The Insider.com article 'We could have lost the Apollo 11 crew:' A once-classified anomaly nearly killed NASA's first moon astronauts, a new book reveals describes a problem during reentry of several Apollo missions where the Service Module jettison did not execute properly and so it remained dangerously close to the Command Module.

It also mentions the newly released book Eight Years to the Moon: The History of the Apollo Missions by Nancy Atkinson.

There is a lot of technical information in the NASA links. There seems to have been some sort of problem with sloshing that prevented the Service Module from continuing to move away from the Command Module, and this was addressed by a Service Module modification implemented for Apollo 14.

Question: How did sloshing prevent the Apollo Service Module from moving safely away from the Command Module and how was this fixed? Is it possible to concisely explain both the problem and the modification that prevented it from happening for Apollo-14 and beyond?

Let's start with the "Statement of Problem" in the anomaly report.

...the service module, upon being jettisoned on a lunar return flight, should have entered the earth's atmosphere, then skipped out into a highly elliptical earth orbit. Thus, the risk of recontact with the command module during entry would have been eliminated. However, on Apollo 8, 10 and 11, the service module did not skip out as expected.

With the spacecraft oriented approximately tail-first* approaching Earth, the service module would separate from the command module, begin firing its -X translation RCS thrusters, briefly fire its roll thrusters to get into a spin-stabilized state, and continue firing the -X thrusters until the RCS propellant was depleted. If the stabilization held, all the delta-v from the thrusters would be applied in the same direction, and the SM would gain ~100 m/s of velocity relative to the command module, enough to give a large separation from the command module and avoid a prompt reentry of the service module.

However, before the thrusters began to fire, the separation of the modules would impart a little bit of pitch and/or yaw to the service module, which would tend to throw the propellant in the tanks on one side of the SM forward, and the propellant on the other side aft. 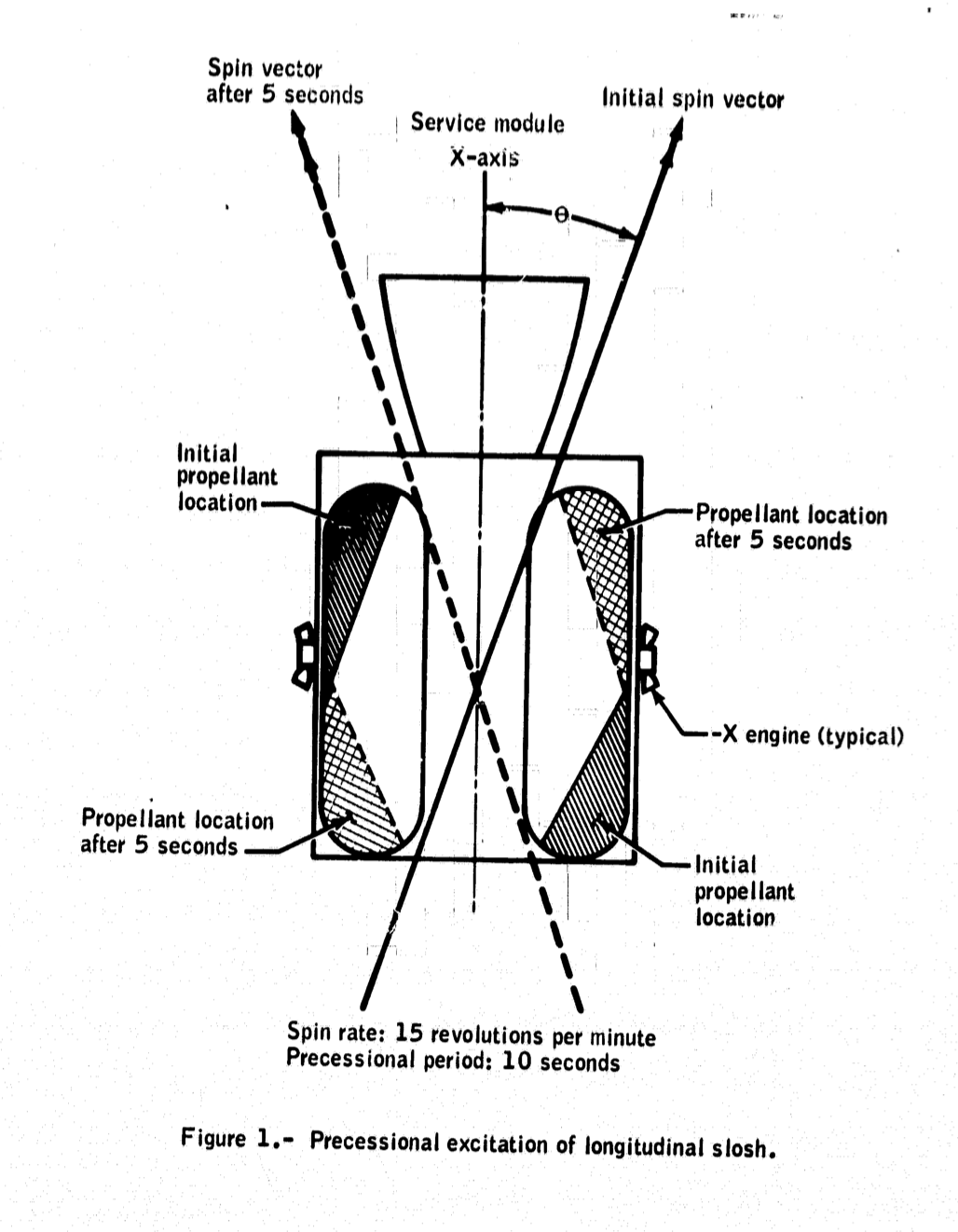 Because of the imbalance in the propellant masses, the roll thrusters would impart a wobbling, precessing spin rather than a stable spin, the fuel would continue to slosh back and forth, the spin would go chaotic, and the service module would tumble in all directions as the -X thrusters continued to fire, which could conceivably bring it back to the CM.

The solution was remarkably crude. Simulations of different scenarios showed that, with the right initial roll rate, the longitudinal axis remained pointed in the right general direction for around 25 seconds before it really began to diverge, so they reduced the roll burn time to get the proper roll rate and simply commanded the -X thrusters to burn for only 25 seconds instead of burning to propellant depletion. The service module would still tumble due to the sloshing, but without the thrusters firing, it wouldn't accelerate back toward the command module. The shorter separation burn would not be enough to prevent prompt reentry of the service module, but apparently that wasn't a necessary feature of the operation.

I think the article greatly overstates the seriousness of the anomaly, by the way; it didn't "nearly kill" the crew of Apollo 11. The service module would be moving away from the command module for around a minute, then essentially its velocity would be on a "random walk" for around 15 minutes, until atmospheric forces started to dominate the trajectories of the two modules. A recontact would be possible, but not very likely. Obviously, it was important to understand the problem and minimize it, hence the anomaly report, but probably a hundred other factors could have killed an Apollo crew just as easily. (Is that reassuring?)

* I'm guessing at the attitude here; pointing tail-first and firing -X would maximize the SM's orbital velocity and thus the "skip-out" aspect.

Not the answer you're looking for? Browse other questions tagged apollo-program history liquid-fuel safety or ask your own question.

23
Why would oxygen be stored as a super critical fluid?
11
Why are spin-stabilized rockets stable?
6
How did the Apollo Service Module reenter?

28
Reasons behind the "Transposition, docking and extraction" maneuver
4
Was an elliptical orbit considered for the CSM when planning the Apollo moon landing missions?
4
Was this large pieces of "space junk" just released from the ISS in the "nadir and retrograde" direction?
6
How would the Apollo telescope have worked in the Apollo command module? Where would it be located and how would it be operated?
6
How did the Apollo Service Module reenter?
6
Was the command/service module visible from the lunar surface?
3
Technical historical books covering the Apollo-Saturn program
3
Did the Apollo Command module really "skip" within, or off of the atmosphere as a part of its reentry program?
4
Was the Lunar Topographic Camera ever used?