Why weren't Gemini capsules given names?

Why didn't the Gemini capsules have names?

Actually, the first manned one (Gemini 3) did have a name, "Molly Brown1".

According to an article in Life Magazine, Oct 11, 1968, "Spacecraft Anonymous", upper NASA management became weary of arguing about spacecraft names with the crew after Grissom decided to name his capsule that. 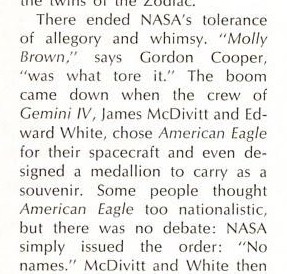 The Gemini no-names policy remained in effect through the early part of the Apollo program as well; the Apollo 7 and 8 spacecraft were nameless. The names returned when Apollo missions started flying two spacecraft independently; for the CSM-only missions, the call sign was simply "Apollo 7" or “Apollo 8”, but with a CSM and LM both on the air, they needed separate call signs. The pre-landing spacecraft got somewhat irreverent names ("Gumdrop" and "Spider" for A9, "Charlie Brown" and "Snoopy" for A10), but the remaining Apollo flights were named with management-acceptable levels of gravitas.

After the landings, the Skylab and ASTP flights went back to generic call signs. I believe the Skylab call signs were "Skylab 2/3/4" even while the crew was in the CSM, but I'm not certain.

Once NASA was flying reusable spacecraft, it made more sense to give them individual names.

Not the answer you're looking for? Browse other questions tagged project-gemini crew-module or ask your own question.

10
Why did Moon missions state their number in radio context?
2
Why don't launcher rockets ordinarily have names?

13
"Failure is not an option" is really a quote of flight director Gene Kranz?
14
Is there an upper limit for the internal size of space stations?
9
Why were ejection seats used in Project Gemini instead of a tower escape system?
7
How was time kept on board early manned spaceflights?
5
Did the astronauts of Gemini 4 have any realistic rendezvous simulator training of orbital mechanic effects?
16
Why did the cones of the Mercury and Gemini capsules have a neck?
7
How many spacesuits were specifically manufactured for John Young?