What is the barometric formula for a gas giant?

The barometric formula describes the atmospheric pressure depending on height and a host of other things. This formula assumes a constant gravitational acceleration over the whole height of the gas column - a reasonable assumption for Earth, as the atmosphere is thin compared to to the size of the planet.

Now, if we have a gas giant with far smaller mean density, this assumption may hold no longer. How does one calculate the density/pressure over height? I would assume that below a certain height, the pressure is above the critical pressure for the gas mixture and one can assume a constant density, down to the solid core. But above?

This formula assumes a constant gravitational acceleration over the whole height of the gas column - a reasonable assumption for Earth, as the atmosphere is thin compared to to the size of the planet.

For a simple argument, if you assumed composition is the same, it's clear that the altitude change needed for pressure to change by a certain factor is less on Jupiter than on Earth. Gravity is stronger, and the radius of Jupiter is larger. Both of these factors result in a smaller characteristic height for the atmosphere. That gives some indication that the above quote may be less correct than the reverse proposition. But there are many more complications.

Obviously, Jupiter has a lot more light gas in its atmosphere than Earth. This is partly because Earth's gravity isn't perfect at holding in Hydrogen against the radiation in space. So this pushes in the other direction - making Jupiter's atmosphere have a longer characteristic length.

But the characteristic length isn't the full story. Obviously Earth has a nice (agreed upon) ground level. Jupiter might have a phase change that vaguely resembles this, but even if there is an abrupt density change, it won't be anything like Earth. So this raises the question of how we should define the region of Jupiter's atmosphere in the first place. Could we accept internal metallic Hydrogen in the center as "atmosphere"? Probably not, but that's just the most extreme case.

Differential equations correctly describing the system can be found in other answers. For completeness, they are:

But let's go into the special case solutions, because I think this is what the OP is asking for. In the case of constant gravity, ideal uniform gas, and constant temperature, the atmospheric pressure follows:

Where $H$ here is the characteristic length. For Earth, this is about 7.4 km. It depends on the temperature, so it's always in flux.

Now, if we add in the tidal component of gravity, we can obtain a new expression. This is assuming a $\frac{1}{r^2}$ form of gravity, instead of a constant. In this case, the solution to the differential equation yields the following pressure profile:

where $H$ is the same characteristic length. $r_0$ is the radius of the planet itself, and $r$ (radius) replaces $h$ (altitude). This equation is accurate for the specific case of:

1 and 2 are terrible assumptions, obviously. For all planets, there tends to be a local minimum of temperature in the atmosphere, and deeper into it, the temperature will be many many times higher, which gives a magnitude of just how bad the constant temperature assumption is.

The homogeneous assumption is also very bad, because the gases stratify subtly. It's not like oil-water separation, but the higher you go, the higher the concentration of the lighter elements will be. In fact, this is a major justification for why the gas giant atmospheres are such pure Hydrogen and Helium to begin with.

Nonetheless, this equation for pressure is still technically better than the constant gravity assumption. But that's not the most relevant on Jupiter. In fact, it's probably more relevant of a correction on Earth.

For a spherically symmetric mass distribution in hydrostatic equilibrium:

Then you integrate up or down from some known conditions.

Lastly you need an equation of state relating $P$ and $\rho$. The simplest is for an ideal gas, derived from good old $PV=nRT$, which is $P=\rho{kT\over\mu}$. $\mu$ is the molecular mass and $T$ is the temperature. $k$ is the Boltzmann constant.

As noted in the question, state changes result in, as you'd expect, completely different equations of state. Note that different species will undergo state changes at different temperatures and pressures, so the real equation of state can get quite complicated. But the ideal gas law is good enough for getting a feel for the general behavior in a varying gravity field.

If you assume a well-mixed atmosphere (which is not necessarily consistent with hydrostatic equilibrium), then you can consider $\mu$ to be a constant. You are left with the need for a temperature profile, $T(r)$ in order to do the integration. 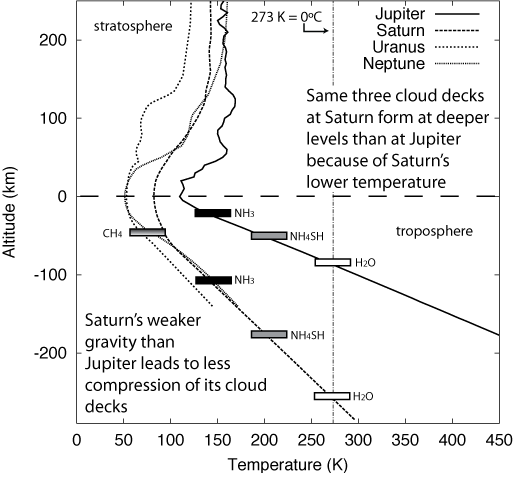 Something else to keep in mind: When you are dealing with the gas giants you no longer have anything remotely resembling a perfect gas.

Long ago I did a brute force calculation of the pressure & density of the atmosphere in a hole through the Earth. The answers are insane--in reality the gas will compress to liquid density and cease to follow the gas law.

For what it's worth:
Using numbers that approximate Uranus (atmosphere just 350km deep, relativly low local g, cold, 100bar at lower limit of atmosphere) and ignoring the gravity from the atmosphere itself - plugging the same numbers into the barometric formula and the one given by Alan (assuming constant temp), the differene would be about 6% at the top of the atmosphere. The difference becomes bigger with higher g, colder Temp, and a smaller radius at the bottom of the atmosphere.

Not the answer you're looking for? Browse other questions tagged planetary-science atmosphere gas-giant physics thermodynamics or ask your own question.

8
Is there a profile of atmospheric pressure and gravity of Uranus?

75
What will be the effect if we stand on Jupiter?
13
If a gas giant is far enough away from a sun will it freeze solid?
32
Why is Jupiter called a "Gas Giant"?
7
With a 10% increase in Earth's mass, would the Karman line move up or down, and by how much?
2
Specific Heat Ratio for a perfect gas mixture
3
Would the >100 km "knee" in Earth's atmosphere still be where MFP exceeded scale height if it were pure Ne or Ar?
7
How deep could a gas giant communications network penetrate?