Chandrayaan-2; time taken to get to the Moon 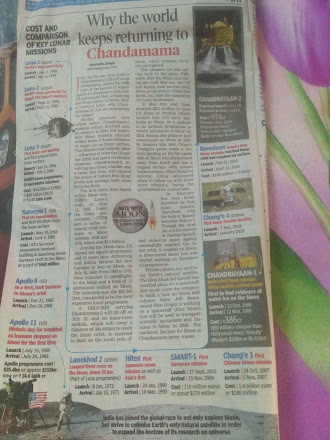 Depicted above is the print version of the July 02, 2019 Times of India article Why the world keeps returning to Chandamama which nicely surveys the large number of missions to the Moon.

India is going to launch the spacecraft Chandrayaan-2 to the moon on 16 July which will consist of a lander, an orbiter and a rover. I found an article in today's newspaper regarding this. If you zoom in a bit, you will be able to see the list of other lunar missions that have taken place over the years. A common difference that I found in lunar missions of 20th century and lunar missions of 21st century was the time. Earlier, the spacecrafts reached moon in a day or two but recent missions take over 2 months.

With developed technology, it should take even less time, but it's the other way round. Can anyone explain the reason behind this?

Link of the article

Chandrayaan-2 will launch on a GSLV Mark-III from Satish Dhawan Space Centre. It consists of three parts, with a total mass at launch of about 2,400 kg:

After launch, from here:

At this stage, the onboard propulsion system will raise the module’s orbit around the Earth through a number of burn. How does this work, you may ask?

[...] The closer the module is to the Earth, the more the gravitational pull, and the greater the speed. Every time the module reaches the perigee, or the point of highest speed, the onboard engine fires, increasing its speed even more, pushing it into a higher, more elongated orbit as a result. With every burn of the onboard propulsion system, the module will keep spiralling outwards in increasingly elongated ellipses.

It's not really a spiral, the perigee remains fairly constant.

Burning only at perigee where velocity is maximum is taking advantage of the Oberth effect, something you can read about in the several excellent answers to Oberth effect for Earth vehicles, or here. 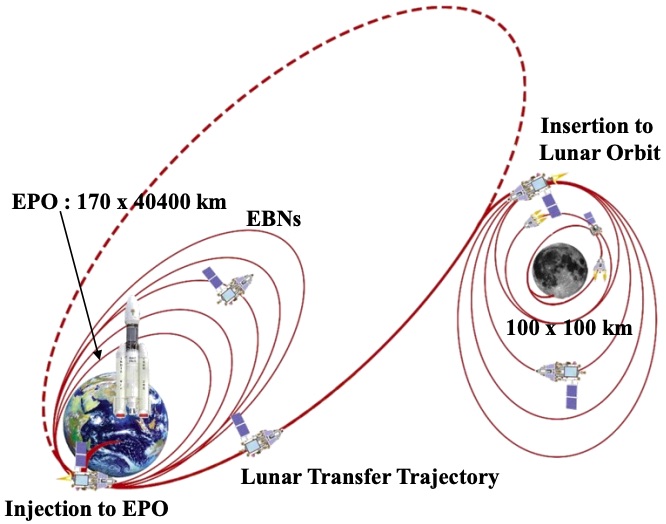 I don't know the details of the burns yet. This article India set to launch second moon mission Chandrayaan-2 in July, landing by September says:

Just like Chandrayaan-1 and Mars Orbiter Mission, the Chandrayaan-2 will also perform orbit raising manoeuvres around the Earth six times to gain the required height and speed to break away from the Earth’s gravity.

This six-step process is a staple procedure followed by the ISRO with the objective of reducing cost of fuel and launching with a home-grown rocket that is as of now incapable of flying directly to the moon, like Saturn V rocket did for the Apollo missions.

However, here is a table of Chandrayaan-1's burns from here:

There will likely be a check of the trajectory after each burn, and there are several adjustments that need to be made before the Lunar Transfer Trajectory (LTT) can be reached.

Satish Dhawan Space Centre is close to 14 N latitude, which means it can potentially launch into a 24° inclination orbit to match the Moon's inclination with respect to Earth's equator. However, the delicate LTT maneuver will have a small window in time and position so that the spacecraft can be in just the right place, at just the right time to be captured into lunar orbit without using a huge amount of valuable propellant.

Hitting this "keyhole" in both space and time will be difficult, and so Chandrayaan-2 will take its time, step by step in order to be captured into lunar orbit with a minimum amount of propellant usage.

All eyes will be on ISRO and Chandrayaan-2 for several reasons.

Not the answer you're looking for? Browse other questions tagged lunar-landing isro or ask your own question.

9
Oberth effect for Earth vehicles
8
Will Chang'e-4 really take a month to "get to the Moon"? With what trajectory?
12
Low Energy Transfer within Earth-Moon system
3
Free Fall to Earth from Solar North Pole?
2
Gravitational keyhole for spacecraft flyby?
3
How many times will the Photon fire its Curie in order to "reach the right spot" to deploy CAPSTONE towards the Moon?
2
Trajectory Optimization To The Moon (Case Study: Chandrayaan-2)
1
How to lease a transponder on a GEO satellite?
1
Can someone help Scott Manley explain this Snoopy-capturing maneuver?

13
Have there been any photos taken of a total Earth-Sun eclipse from the Moon, or its vicinity?
16
Is it easier to get to and from the moon than to the bottom of the Mariana Trench?
51
How did the Russians get moon rocks?
16
Is there any way to determine the fate of Chandrayaan-2?
7
What are the operating systems and network stack in the Chandrayaan - 2 vehicles?
9
Why would thermal imaging be used to locate the Chandrayaan-2 lander?
6
Why is the Duration of Time spent in the Dayside greater than that of the Night side of the Moon for Chandrayaan-2 Orbiter?
10
What went wrong in the Chandrayaan-2 mission with the Vikram lander?
23
What equipment was taken from Earth to the surface of the Moon and back?