Does any group have a serious proposal to build & maintain a station at L1?

To me, it's a no-brainer that the Earth-Moon L1 location is a strategic locale, sort of a forks of the Ohio in local space. I've seen some proposals to put some long-term station there, but has anyone really "done the math" and come up with a fully thought out plan?

Such a plan should encompass most of the following:

Manned, unmanned, or hybrid (i.e., visit occasionally) is immaterial, so long as the plan involves a long-term presence.

And Russia has had some similar plans, although it was for a station in lunar orbit: http://www.russianspaceweb.com/los.html

The Boeing proposal would use some structural elements left over from ISS construction, while also including modules similar to those planned for the Russian segment of the ISS. By placing a station there, you can take advantage of the orbital mechanics around Lagrange points and host a reusable lunar lander. If you did any sort of materials processing on the moon (i.e. extracting water from lunar dust or using lunar ice to make liquid hydrogen and liquid oxygen), then you could also use the lander to send those materials up to the L1/L2 waypoint so it could act as a propellant depot.

Here's another link that describes the Boeing plans in more detail (it's referenced by the wikipedia article as well): http://www.nasaspaceflight.com/2011/12/exploration-gateway-platform-hosting-reusable-lunar-lander-proposed/

The LiftPort Group is planning to station the "top" of their Lunar Space Elevator at EML1. From that point, they would drop an anchor station to the lunar surface while extending a counterbalance to 250,000 km above the lunar surface.

Below is a graphic illustrating the proposed Lunar Space Elevator. 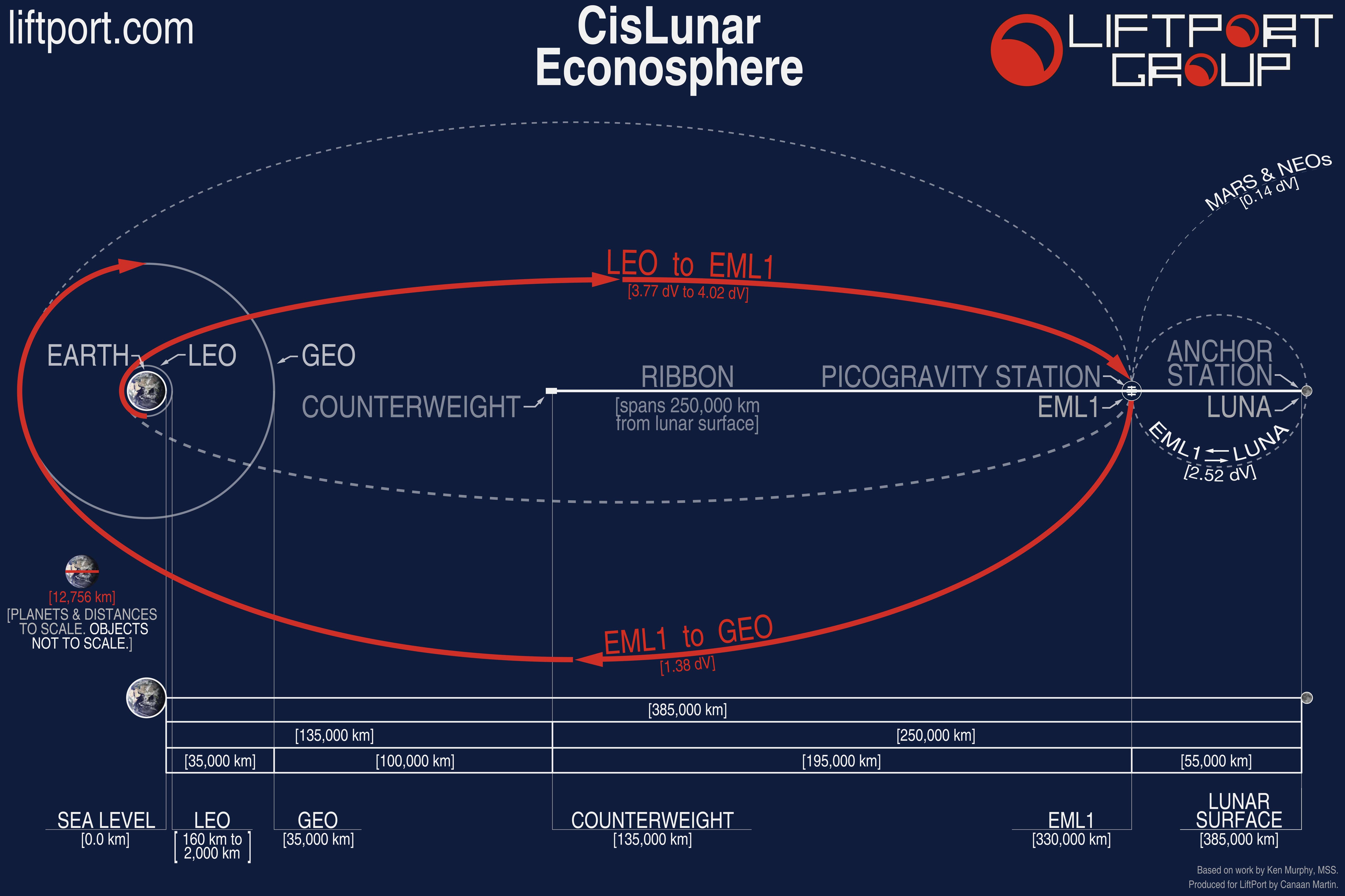 According to Michael Laine, the LiftPort CEO, the Lunar Space Elevator will be in place and operational by the end of 2019. Their biggest remaining hurdle is funding, as they will need nearly $1B US to build the elevator.

The Non-Atmospheric Universal Transport Intended for Lengthy United States Exploration (Nautilus-X), a concept developed by the Technology Applications Assessment Team of NASA, is intended to initially take up residence at EML-1, after being assembled at the ISS.

The spacecraft was designed for long duration (one to twenty-four months) exo-atmospheric space journeys for a six-person crew. In order to limit the effects of microgravity on human health, the spacecraft would be equipped with a centrifuge.

The spacecraft itself is proposed to be relatively cheap by manned spaceflight standards(2) as it is projected to only cost US$3.7 billion. In addition, it may only need 64 months of work.(3)(4) 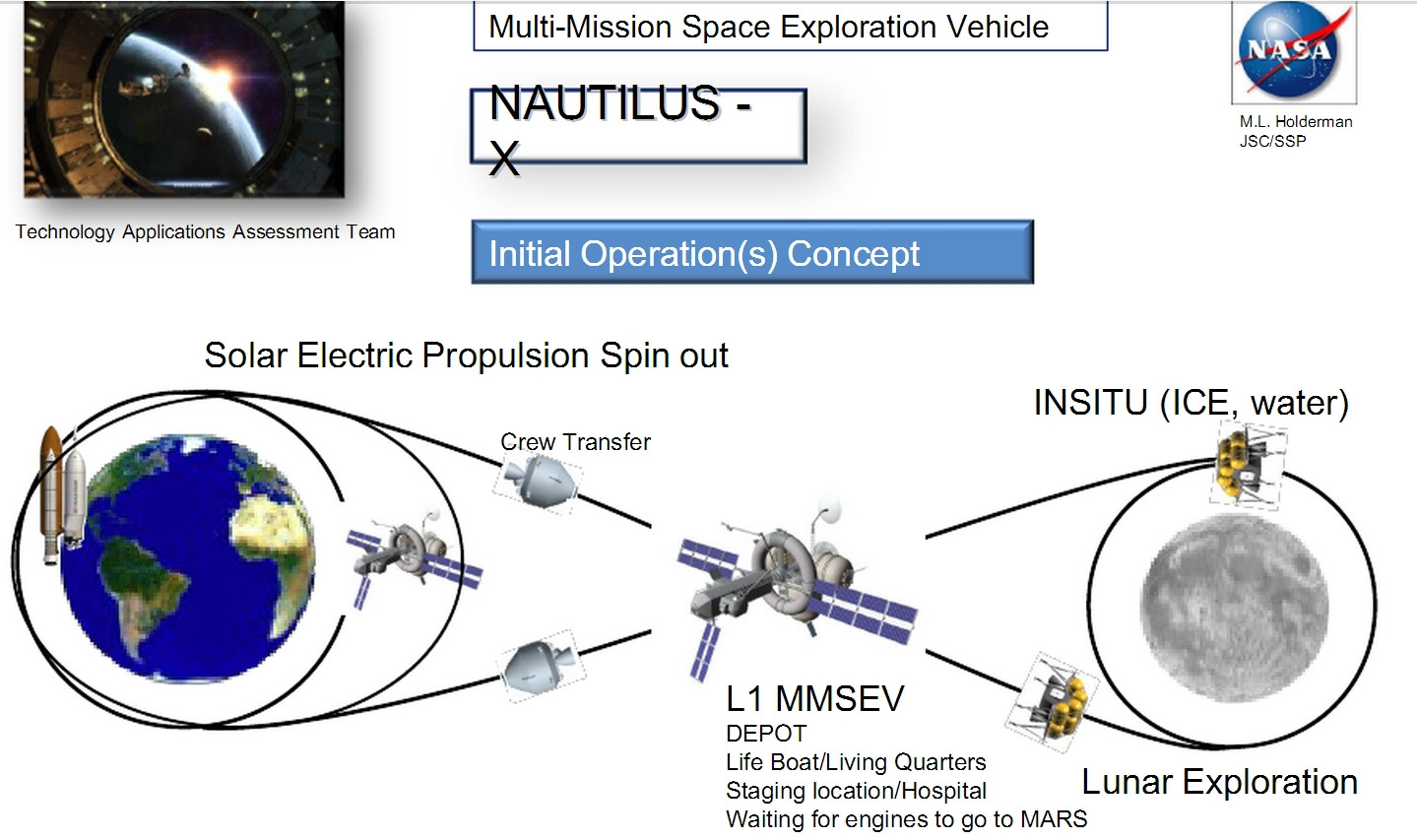 There was supposed to be a demonstrator of the centrifuge section on the ISS, but I'm not sure if it's going to make it to a flight manifest. 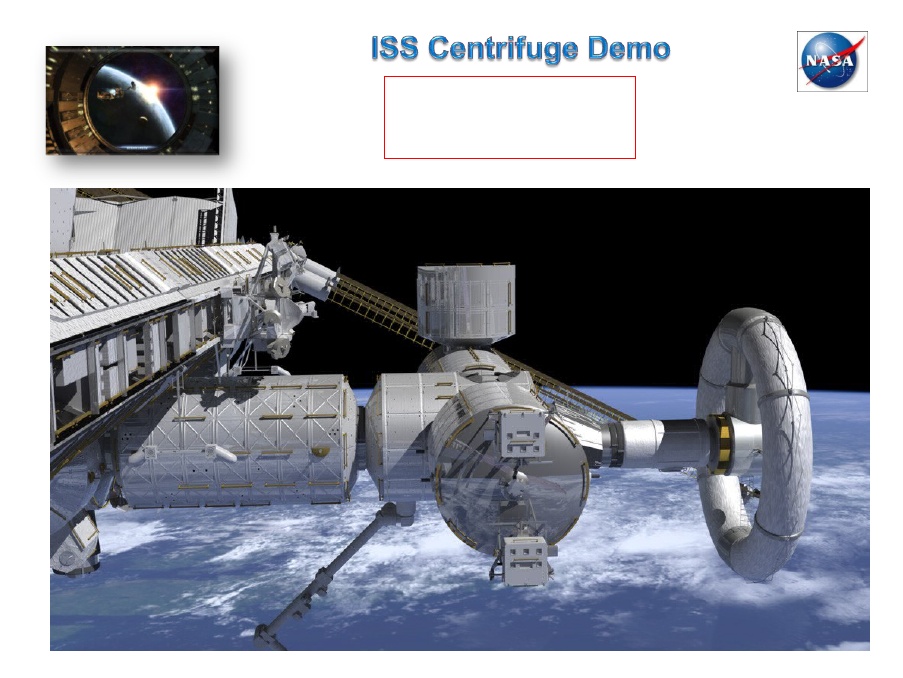 This article from January 2014 includes an interactive graphic of the extended duration version by one of my favorite space artists, Adrian Mann.

Not the answer you're looking for? Browse other questions tagged space-station future-missions lagrangian-points fuel-depots mission-design or ask your own question.

8
Could a rocket booster be refueled in space?

22
Is any space station planned to be put in orbit in decade 2014-2024?
5
Does the Earth have any Trojan asteroids?
18
Are there any promising next-generation space station cooling technologies?
15
Have space station modules already been replaced?
24
Would it have been any more difficult to build the space station without the space shuttle?