How exactly does this Apollo astronaut's tool work? What was it called?

The BBC News article Apollo in 50 numbers: Weights and Measures shows the following photo with the caption:

The astronauts brought back more than 360kg (790lb) of Moon rocks for study on Earth (Credit: Nasa)

I'm guessing that this is some kind of reach-extender to allow the astronaut to pick up rocks without needing to bend over and use their hands.

Question: How exactly does this Apollo astronaut's tool work? What was it called? The angle of the graspers looks like they would not extend around the rock to be picked up, unlike the rigid fingers shown in the second image of a modern "reach extender". How do these grasp rocks effectively? Was there a maximum size or mass they could be used on? 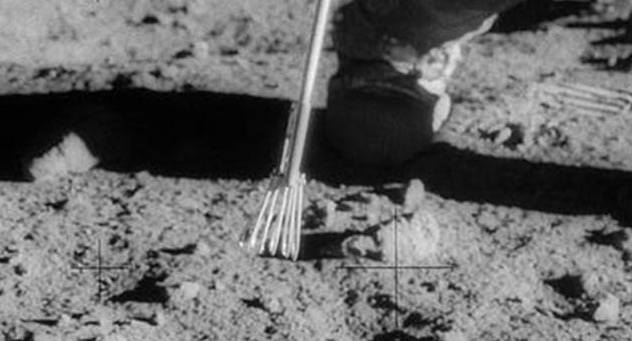 The tongs consisted of a set of opposing spring-loaded fingers attached to a handle and were used for picking up samples. Postflight evaluation of Apollo missions 11, 12, and 14 indicated a need for increased length, larger jaws, and additional closing force. These changes were incorporated for Apollo missions 15 through 17. Also, to conserve traverse time and to afford maximum flexibility in obtaining samples, two sets of tongs were carried on the Apollo 16 and 17 missions.

Not the answer you're looking for? Browse other questions tagged the-moon nasa apollo-program sample-return or ask your own question.

4
What exactly were the controller roles in the Apollo go/no-go calls?
14
What was this Ziploc bag used for on an Apollo 14 moonwalk?
29
How was the Apollo lunar liftoff video transmitted to Earth?
2
How does this ISS vision-testing instrument work? What exactly is being measured, and how?
8
How does the Apollo LM ascent guidance program P12 actually work?
1
At what time in the Apollo 14 mission did the maneuver shown in this image happen, and what exactly was happening?
6
Apollo Mission Control Room 2, how do these decimal number displays work?
5
Exactly how does one lope on the Moon?
5
How hot was the surface of RTG radiator which powered ALSEP on Apollo-12?