What was the nature of the known bugs in the Space Shuttle software?

It's been claimed or suggested in other posts that during the entire history of the Space Shuttle, only one software bug actually survived the development and review process, making it to flight. Even if the claim of only one bug is an urban legend, the number of bugs was far less than what occurs in commercial software, and that's a testament to the care taken by the shuttle software developers.

What was the nature of the bug(s) in the Shuttle software?

Although the Space Shuttle flight software was of outstanding quality, it's completely incorrect to think that there was only one bug. There were many known bugs in the flight software (FSW). Here are three I can think of off the top of my head that impacted missions.

Several other bugs showed up in Shuttle Mission Simulator training. They were uncovered there because of the extreme nature of the training scenarios compared to actual flight or the FSW verification facilities. They never impacted missions, but they were bugs that flew. There's a presentation about these bugs (the ones that were serious enough to crash the vehicle) here. Here's a fun one from that presentation - the PASS completely hung up on a Transoceanic Abort Landing (TAL). The crew had to engage the BFS. 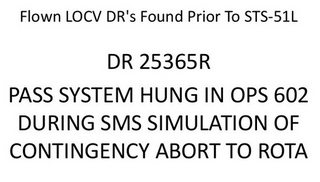 Courtesy of Tristan, here's a slide from another presentation by James Orr showing ~425 flown FSW bugs (listed as DRs - Discrepancy Reports) at the peak around 1983. 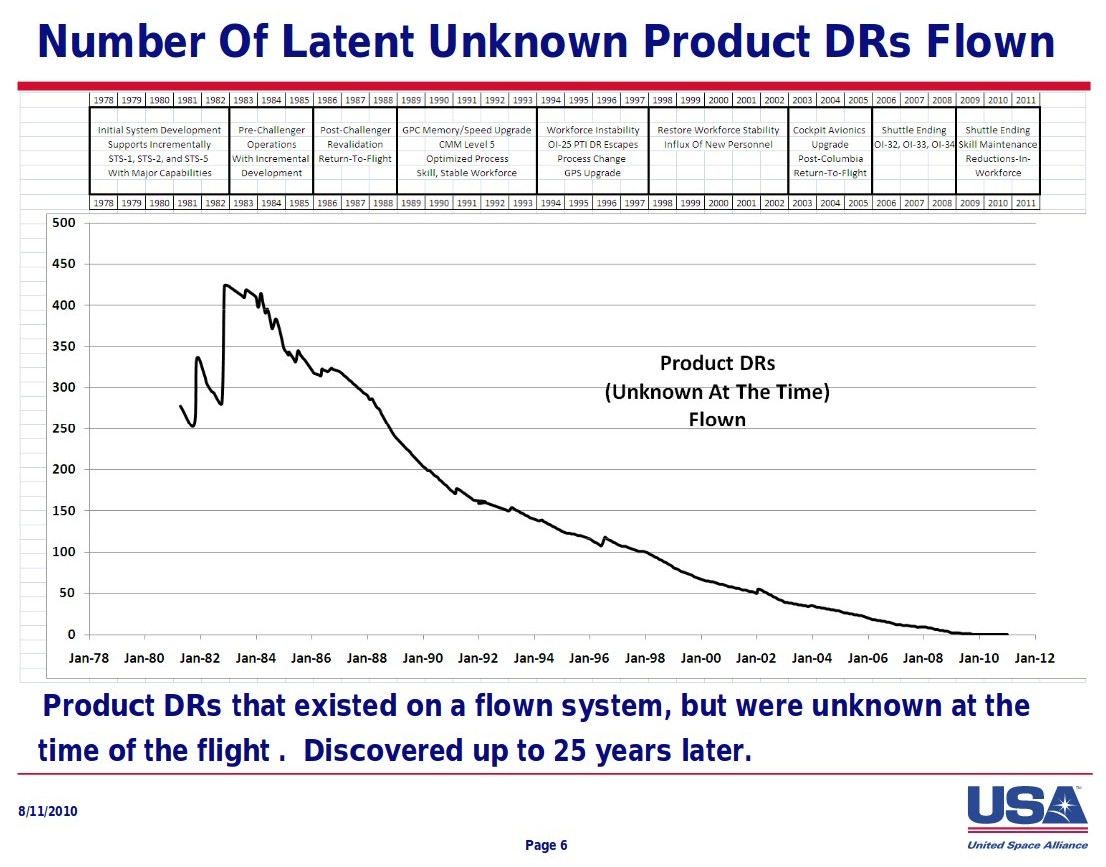 TL;DR: If someone tells you the Space Shuttle had only one FSW bug, don't buy any real estate from them.

As the author of 1 of the posts you reference about the number of bugs found, you've misunderstood the words. Please re-read them.

On the STS, a "bug" is when the software did not meet the requirements. It didn't necessarily mean something bad would happen, just that the code didn't match the requirements. The developers didn't classify the bugs. For overly complex bugs, a developer might be asked for analysis. Nothing was called "a feature" if it wasn't in the requirements. That would be a bug too.

Especially with guidance calculations, sometimes the requirements couldn't be implemented due to limitations of the computers. In real-time coding, a late answer is just as bad as a wrong answer. At least once, the requirements needed to be changed to match the code.

Nobody knows the real number of bugs in any software at any time, but Jim Orr literally wrote the book on Space Shuttle software issues and errors. He was provided all the data on requirement reviews, design reviews, testing plan reviews, code review and test results when I worked there for the GN&C FSW

There were definitely hundreds of bugs in the FSW, very few were considered SEV-1. None would cause a computer lock up or other typical error people put up with in their lives today. The GN&C code didn't have issues like typical desktop or server code does. There wasn't any dynamic memory allocation. Use of pointers required a written, approved, variance from the SW standards board. All the code was formally peer reviewed by at least 6 people. More complicated code would be reviewed by 20+ people - in the same room. Over the decades, the process used to create the software was always improving. The process was setup in such a way that it didn't rely on super programmers to create relatively bug free software. It really was all about the process.

Over my decades writing software at many different companies, I've seen that everywhere else depends/hopes on the super programmer idea to produce better results. The problem with this is that super programmer isn't easily reproducible. I've seen it work 1 place and only because each programmer considered any bug a personal failure. Everywhere else is stuck with good, average, and bad programmers. Especially in larger organizations, the scale seems to shift towards bad more than other places. There are always exceptions and obviously, even if I've worked directly with 3000 programmers professionally, that isn't all programmers everywhere.

Hope this clarifies and is helpful.

33
What operating system(s) were used in the space shuttle?
23
How often, if ever, was "software" updated in the shuttle orbiter?

18
How fair is the claim that Shuttle boosters diameter was dictated by the railroad gauge?
23
How often, if ever, was "software" updated in the shuttle orbiter?
12
How is the software for scientific space missions developed?
7
What caused New Horizon's so-called "40-year glitch"?
4
Why would a space shuttle have flown a normal first-stage and early-second-stage ascent trajectory during an RTLS abort?
10
How hard was it for the Shuttle to perform attitude control for the entire ISS? Did they have to calibrate?
6
Shuttle RCC (reinforced carbon-carbon) panels?
27
What were the differences between the STS Orbiters?