Why was Bluegill Prime range-safetied on the launchpad?

Bluegill Prime1 was a planned launch of a nuclear weapon into space on a suborbital Thor missile and its (the nuke’s) ensuing detonation in space as part of Operation Fishbowl (a series of U.S. nuclear tests involving the detonation of nuclear weapons in and near space, essentially to see what would happen). On 25 July 1962, the launch of the Bluegill Prime device2 into space atop its Thor was attempted, but the rocket failed to lift off the pad at Johnston Island, and, instead, caught fire.

At which point the range safety officer (RSO) pushed the “rapid semi-planned disassembly” button, rupturing the rocket’s fuel and oxidiser tanks; the resulting explosion and fire destroyed most of the launch complex, and also touched off the high explosives in the nuclear device, destroying it and contaminating the entire island with plutonium and other delightfully radioactive substances. As a result, Fishbowl was brought to a screeching halt for several months, until the launch complex was fully decontaminated and rebuilt.

Now, I understand that the reason for having range-safety systems is so an off-course or malfunctioning rocket can be blown up before it falls on someone or something important. The logic behind this is easy to see when a rocket suddenly starts veering towards land a minute into flight, but even failures just after liftoff, when the rocket is still rising essentially vertically above the launchpad, can be mitigated by blowing up the rocket (launch facilities are built to withstand massive amounts of flame and superheated gas anyway, for obvious reasons, and blowing up the rocket more or less ensures that it’ll reach the ground in small, or at least smallish, fragments, which are [relatively!] harmless; in contrast, a more-or-less-fully-fuelled rocket falling back onto the pad intact can easily obliterate a launch complex).3

The benefit of destroying a rocket while it’s still on the pad, however, is somewhat less than apparent; assuming that there isn’t something trying to tip it over, a rocket can’t exactly fall down to the ground when it’s already on terra firma (barring a massive structural failure of the rocket or the launchpad), and, even if part of the rocket catches fire or something, the fire can often still be fought and extinguished (up to a point; if, say, the entire launcher is on fire, you’re still better off getting the hell out of Dodge). In any case, the worst that can happen if you don’t range-safety a rocket on the pad is that it (the rocket) explodes on the pad... which is what you’re guaranteeing will happen if you do range-safety it on the pad, whereas there’s often a good chance that it won’t happen if you don’t range-safety it on the pad. Given that a fully-fuelled rocket exploding on the launchpad is generally considered an undesirable occurrence[citation needed], especially when it has a nuclear weapon full of high explosives and highly-radioactives on top[citation needed], one would expect that a rocket (especially one with a nuke on top) would not be range-safetied on the pad if at all possible (about the only circumstance I can think of where it would be beneficial would be if it was actually tipping over, in which case blowing it up as it’s in the process of tipping would help reduce the damage caused to whatever it’s falling onto).

So why did Bluegill Prime’s RSO blow his rocket up on the pad?

1: The “Prime” in the designation indicates that it was the second attempt at this particular test profile, the original Bluegill having been blown up in flight after telemetry from the rocket (and, thereby, tracking data) was lost. Following the failure of Bluegill Prime and the ensuing several-month wait while the launch facility was being rebuilt, Bluegill Double Prime was launched, went out of control about a minute and a half after liftoff, and was destroyed; they finally succeeded with Bluegill Triple Prime, launched on 25 October 1962. Fourth time’s the charm!

2: “Device”, not “warhead”, despite being launched via missile, as it was designed to detonate in space rather than reentering the atmosphere and blowing up a particular target.

3: For instance, see Cygnus Orb-3, where the vehicle lost thrust 15 seconds after liftoff due to an engine explosion, and was range-safetied while falling back down towards the pad; despite the spectacular failure, damage to the launch facility was remarkably minor, and the gap in Antares launches following the accident was prompted, not by the need to rebuild the launch facility, but by the process of redesigning the rocket.

According to the Defense Nuclear Agency report Operation Dominic I page 232 the destruct command was sent "to prevent any possible nuclear explosion."

Nuclear weapon safety systems, while robust, are not invulnerable to damage when their carriers fail. The Range Safety procedures may have been informed by the accident just over a year earlier in Goldsboro, North Carolina, when a B-52 bomber carrying nuclear weapons crashed. Five of the six safety interlock systems preventing nuclear detonation on one of the bombs had been unlocked by the aircraft failure and/or the uncommanded release of the weapon. (John May, Greenpeace Book of the Nuclear Age, page 141 - conclusion disputed by DOD)

This website www.dtra.mil has a surprising amount of detailed reports about this stuff! Even pictures. 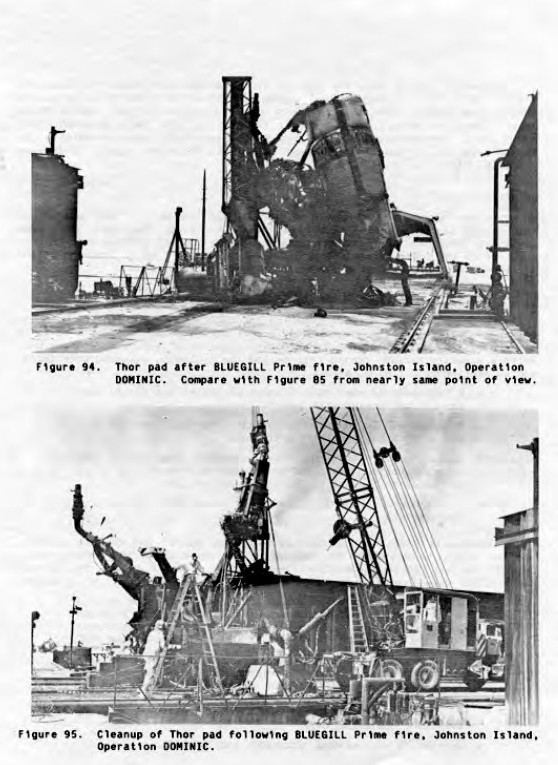 Not the answer you're looking for? Browse other questions tagged failure military range-safety weapon or ask your own question.

20
How can a rocket's self-destruct make for a safer situation than being out-of-control?
11
For a launch, how is safe viewing distance determined?
4
Visibility requirement for launch; when can it be ignored (or "mitigated"), and why?
5
Ground personnel proximity to space shuttle at launch?
7
Does the US Navy guard SpaceX drone ships and make sure bad actors don't abscond with critical technology on the high seas?
3
Was launch pad 110R ever used again after being obliterated on 3 July 1969?
8
Why do the Chinese launch most of their rockets so far from the coast?
5
Does the Proton-M have a launch termination system?
9
Why was Redstone Arsenal specifically chosen for post-war rocket development?