Why are there double shadows in this Apollo 14 magazine?

In magazine AS14/KK there are clear double LEM shadows present where only one should be. I can't find any evidence of double exposure. How did this happen? I've even found 2 shadows that overlap and have holes in them! 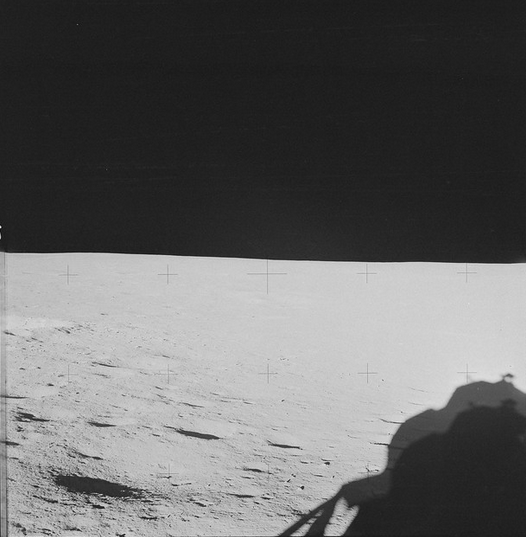 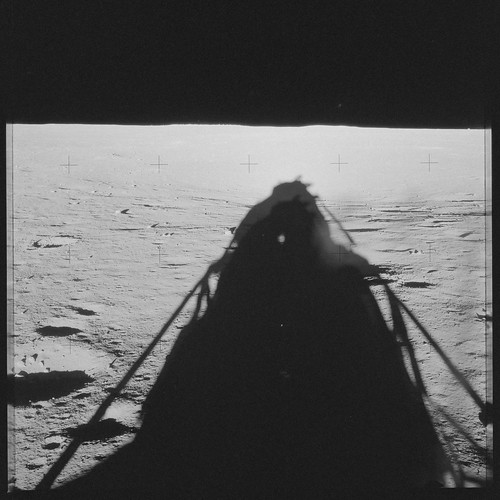 Original images at NASA (both magazines were B&W film)

This is a double reflection of light between the LM window and the camera lens. There are no two shadows as if they are caused by two light sources. It's the same shadow captured twice in the photograph.

1) Moon craters inside and outside the outer shadow don't line up (especially obvious close to the upper orange line). They wouldn't be affected if the double shadow of the LM would be caused by two light sources. In fact, they show the same double images like the LM. I marked a few with same-colour lines in the image from Apollo 14: 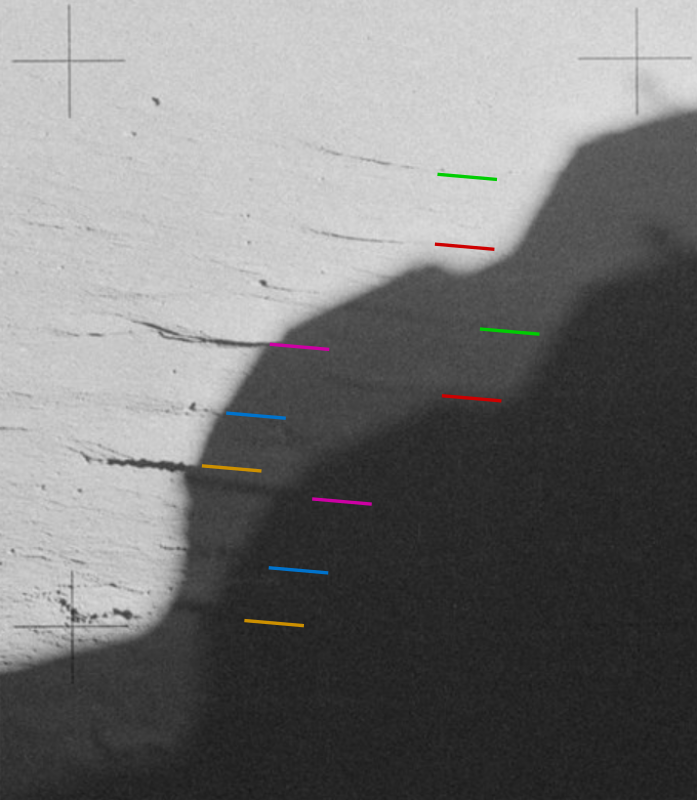 2) The position of the double shadow varies strongly as is visible in the video from Apollo 11 linked by @bruffy in the comments. Note that there is no double shadow in the third still were the camera is quite far away from the window as can be seen from the window frame that is rendered much sharper than in the middle image. In the first and second image the double shadow moves from left to right as the relative alignment between camera and window changes. 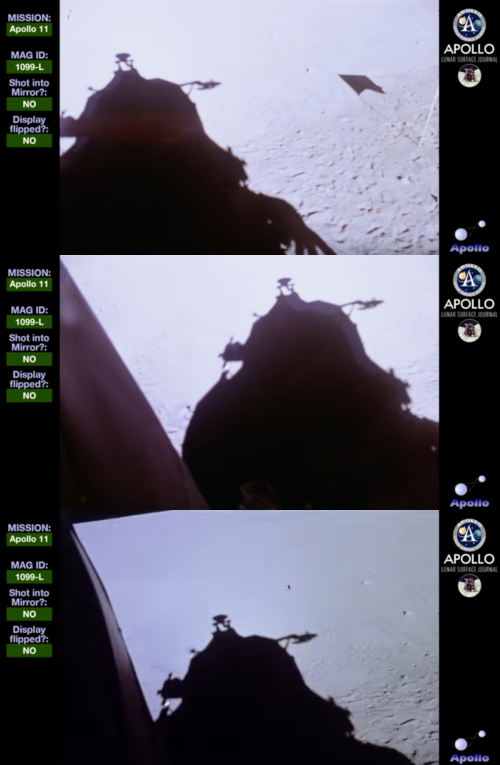 3) Note that in the image from Apollo 12 there is no double shadow visible around the landing legs. If there were two light sources, these should be visible as well. In the photograph nothing is seen there because the bright light from the surface outshines the faint reflected light. Reflected light can only be seen in the pitch black area of the shadow cast by the LM.

update: After reading @asdfex's excellent answer I think it is probably the right answer. I'll leave this here because it addresses the double light source hypothesis quantitatively, but I recommend that one reads the other explanation as it's probably the right one!

I'm going to put forward a theory and support it with the positions of the Sun and Earth seen in the sky of the Apollo 12 and 14 landing sites.

Seen from the Moon, the Sun is about 0.5 degrees wide while the Earth is about 2.0 degrees wide. You would expect the Earth to be at least somewhat near the Sun in the sky because the launches were timed to provide good sunlight on the Moon.

What I see in both of these cropped bits from the original NASA images is a shorter, weaker shadow that's about 4x fuzzier than the longer, stronger shadow. That certainly seems consistent with a shadow of Earthshine being shorter than a shadow of Sunlight.

The notations for these frames (see annotations of the images below) suggest that both were taken soon after landing. According to my plots of data from JPL's Horizons using the landing dates and lunar coordinates of the landing sites, the Sun was quite low on the horizon while the Earth was already at an elevation of about 60 degrees above the horizon and obviously remains fairly constant.

Light from both the Sun and Earth come from nearly the same azimuth (not much surprise there) so the shadows from Sunlight and Earthshine should point in nearly the same direction, about 270 degrees azimuth.

Here are azimuth and elevations of the Sun and Earth as seen from these Apollo landing sites. Time axis is hours since 00:00 on landing day. Sun is solid red, Earth is dashed blue.

and the Sun is rising. So the angle difference will depend on the exact time of the photograph.

I don't have time today to check those but the explanation seems consistent enough for now. I'll get back to the timestamps tomorrow. 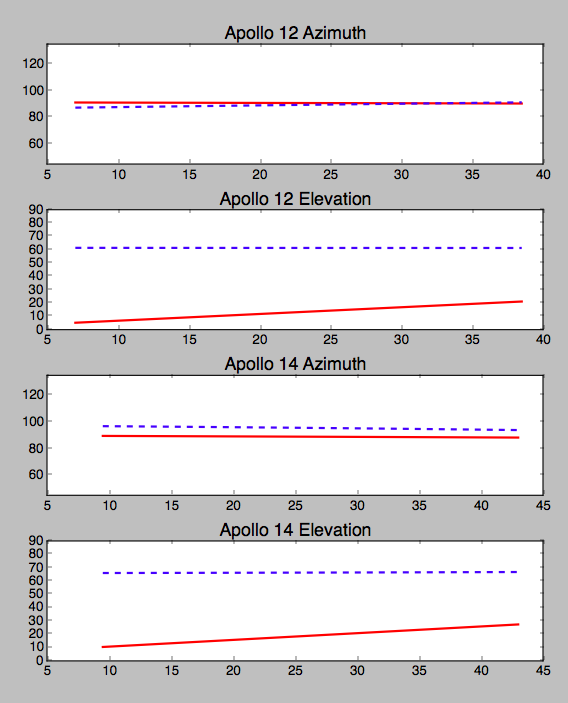 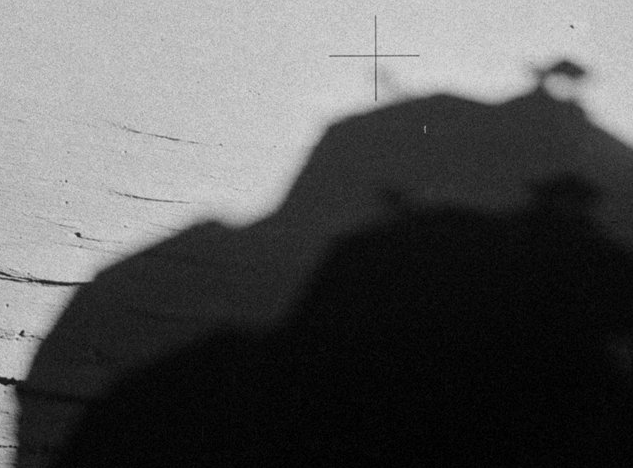 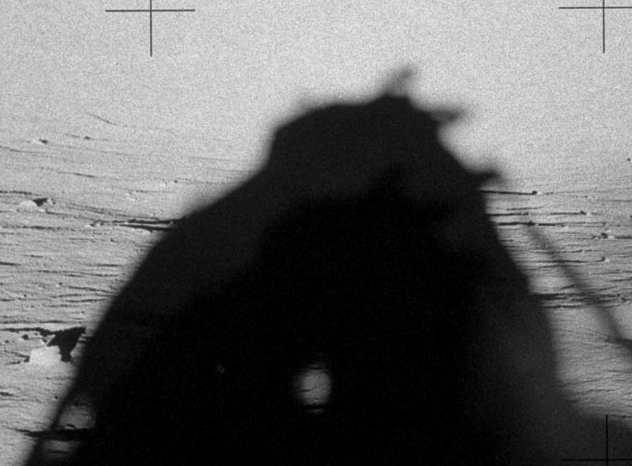 The conclusion of the analysis at https://www.aulis.com/double_shadow.htm is that reflexions between the panels of the forward windows and/or the camera optics cannot produce the observed pattern. Therefore, it actually is a double shadow or an artifact of a some sort of a front projection apparatus.

15
What is the EXACT time that the sun will rise, at the Apollo 11 landing site, in Feb 2173
4
Stanley Kubrick used a NASA-inspired lens to film by candlelight in Barry Lyndon, but what did NASA use it for?
2
Is it posible to convert JPL Horizons Vectors to ECEF?
0
Which are the correct input parameters for NASA Horizons query to get the right Alt/Az data needed to plot analemmas for various planets?

14
How many photographs are there of the whole Earth?
12
From which Apollo mission is this audio sample?
90
How did Apollo 16 capture this full photograph of the Moon's far side?
16
What is this on the craft from the Apollo 17 mission?
3
What's the story behind this Apollo-era image?
10
How accurate is this Apollo Command Module replica, and why would it be copper-colored?
1
Should there be black crosses from the Réseau plate in this Apollo mission photograph? If so, where are they?
9
Why is so much of InSight visible in this image?
3
Why is a corner of InSight's selfie cropped like this?
5
Help understanding this Apollo 11 docking probe image, what are we looking at, and from where?