Reading Mike Mullane's book, Riding Rockets, it seems like shuttle flights were scrubbed, more often than not, during countdown after the crew had boarded, due to some sort of systems failure or weather condition. Some astronauts kept track of their ratios of strap-in to lift-off, with Steve Hawley at one point having been strapped into his seat for launch nine times but only flying twice. Mullane's last flight was in 1990, and I don't know if the track record got better in later years.

Over the course of the Shuttle program, what was the average number of launch attempts per mission?

What mission suffered the greatest number of launch attempts before successfully flying?

Either mean, median, or mode is fine for the average. Getting as far as crew strap-in seems a good definition for a launch attempt, but I'm happy to accept another one.

(bulleting and emphasis mine.) (Pad aborts are counted as scrubs)

I get 121 scrubs in 135 launch campaigns, or almost a 90% chance of scrubbing. To actually answer the question as asked, ~1.9 launch attempts per mission.

The linked document has some info on each scrub.

Note: there are some ambiguities that could change the number of scrubs by a few either way. Mission 51-E was cancelled after being rolled out, and there was a whole lot of rolling in and out, doing tanking tests, etc. for missions STS-35 and -38 during the whole hydrogen leak fiasco.

Unfortunately it looks like the track record didn't really get better over time. This shows number of scrubs plotted against the eventual launch date. 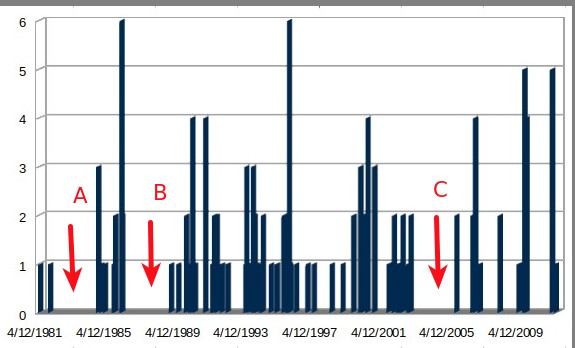 20
What are the most-delayed missions that eventually launched successfully?
10
Will SLS be launched as often as the space shuttle was?