What is this red spacesuit made out of, and why is it red?

The BBC News website often uses this file photo on spaceflight-related pages such as this one.

Is it possible to identify the following? 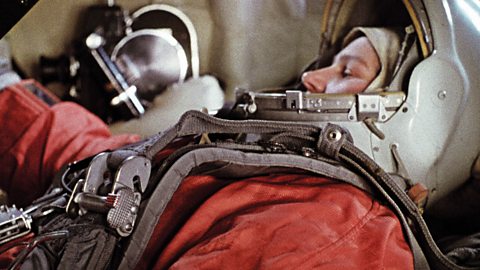 A tineye query shows that this is a stock photo of Valentina Tereshkova, the first woman in space.

She is the first and youngest woman to have flown in space with a solo mission on the Vostok 6 on 16 June 1963. She orbited the Earth 48 times, spent almost three days in space, and remains the only woman to have been on a solo space mission.

A military portrait taken in 1969 shows the same facial features 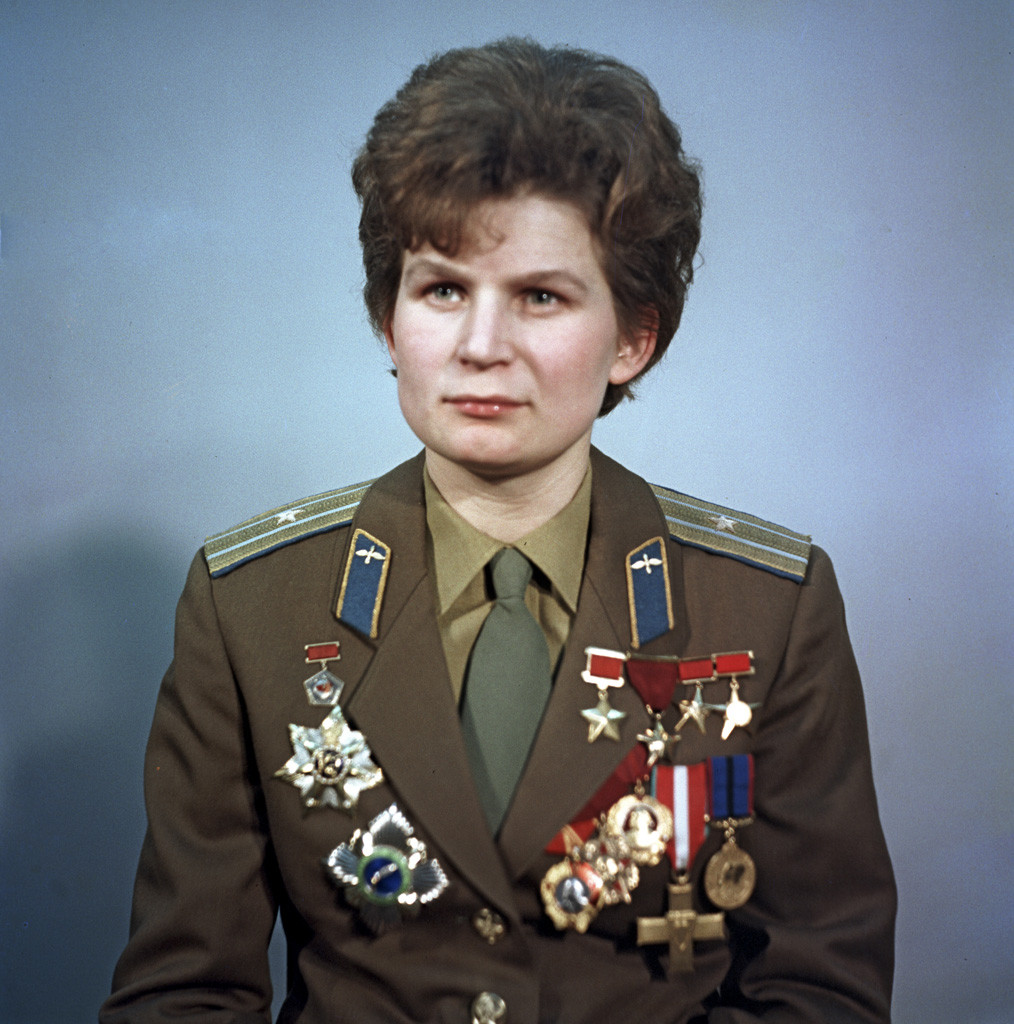 And immediately prior to launch 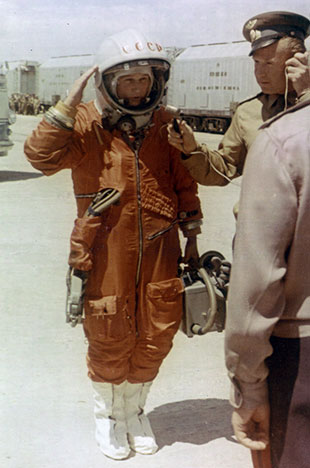 Valentina Tereshkova, as seen on June 16, 1963, as she reports to the pad for the launch of the Vostok 6 mission. (Roscosmos)

And a blue coloured suit under the outer red shell 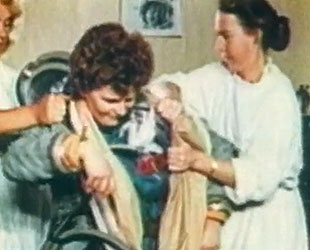 Video still showing Valentina Tereshkova donning her spacesuit. Her patch can be seen on the thermal suit. (Roscosmos/1TV.ru)

The exterior of the bright orange spacesuit was devoid of any markings. There were no patches or name tags. The only identifier was printed across the front on her helmet, the Cyrillic letters "CCCP" (USSR).

But underneath that outer layer and the pressure garment it covered, hidden from view, Tereshkova wore a sky blue thermal garment. And on the left shoulder of that flight suit was a large embroidered emblem, the world's first space mission patch.

It appears here that the "pressure garment" is an off-white colour.

The space suit is an SK Series suit used for the Vostok missions, although specifically, the suit in the photo is an SK-2 (made specifically for women). 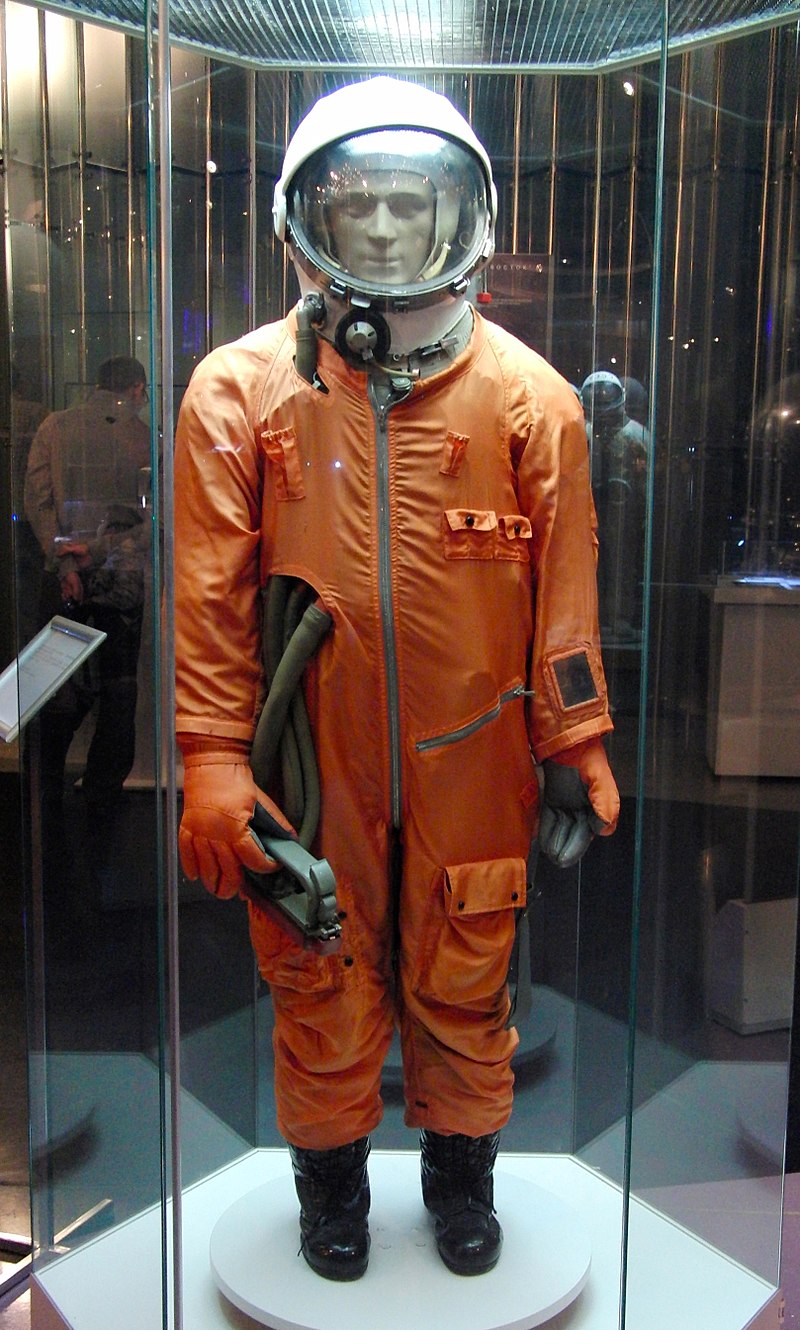 Please don't ask me why the mannequin appears to be holding a staple-gun. Maybe the suit is susceptible to snagging.

It looks very much as though the red suit is a protective nylon shell over the more functional space suit. I assume it's red because that's the colour of the USSR flag, and to allow the suit to be easily visible to the recovery team. Obviously, however, propoganda has a factor in the choice of the colour.

Not the answer you're looking for? Browse other questions tagged identify-this-object spacesuits or ask your own question.

2
What are these mysterious white star-like dots near MU69 Ultima Thule? Real objects near the asteroid, noise, cosmic rays, or something else?
8
Why ISS Astronauts have red stripes?
12
What does this SpaceX tweeted photo show and what causes the pure red and blue color?
2
What did Luna 3's illuminator illuminate and why did it need a cover?
11
What is the utility of this peanut-shaped ground facility?
11
Did astronaut Scott Kelley eat cake in space?
1
What mission is this Chris Hadfield photo associated with and what is the location? And what is that thing?