Has anyone in space seen or photographed a simple laser pointer from Earth?

In the question How to make a green LED as visually bright as a 0 magnitude star? I worked out that a 100 mA green LED with a 10° half-angle 18 kilometers away would be as bright as a 0th magnitude star. So a 5 mW laser pointer with a miliradian divergence could potentially be seen even farther away, or at least photographed.

Question: Has anyone in space seen or photographed a laser pointer from Earth?

Note I'm asking about a laser pointer, not some high-powered laser used to bounce off of the Moon, or a powerful searchlight. Something that you can hold in your hand.

Don Pettit mentioned a an experiment set up with the San Antonio Astronomical Society who pointed both spotlights and a blue laser pointer at the ISS, pictured below in a 5-10 second exposure: 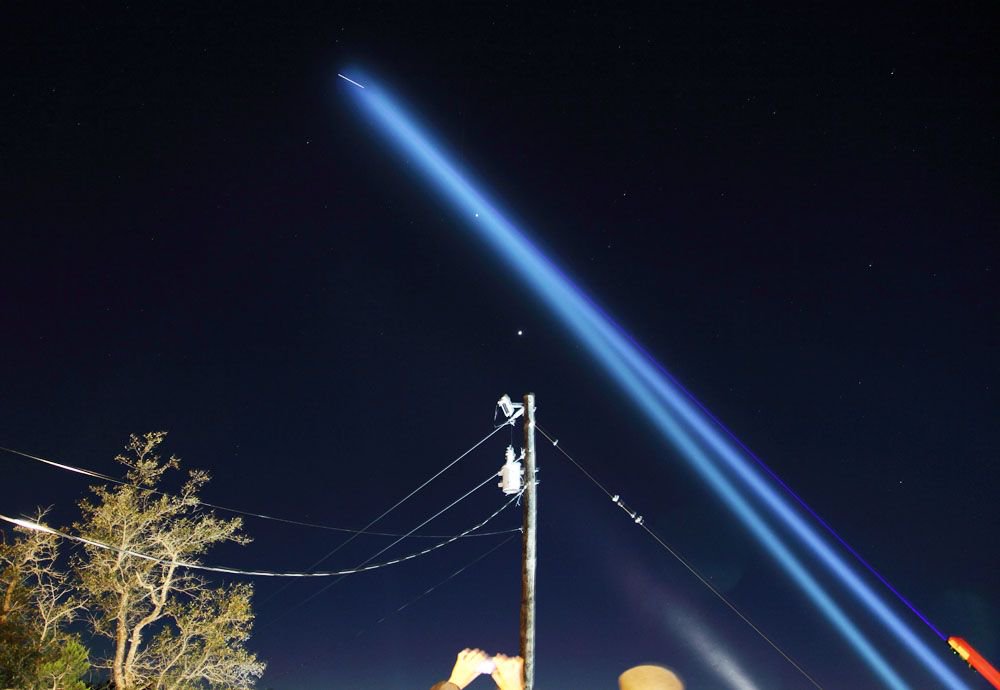 I believe, but don't quote me on this, that the laser pointer was seen while the spotlight was not (with the aperture used). This is a picture from the ground, probably a short exposure (seeing the trail on the ISS). This was not an official experiment, rather one he set up with a friend who wanted to test a theory.

In addition to this, a picture of what the laser from the incident on March 4, 2012 can be seen in this tweet, also by Don Pettit, as Tristan previously mentioned, and would look approximately like this: 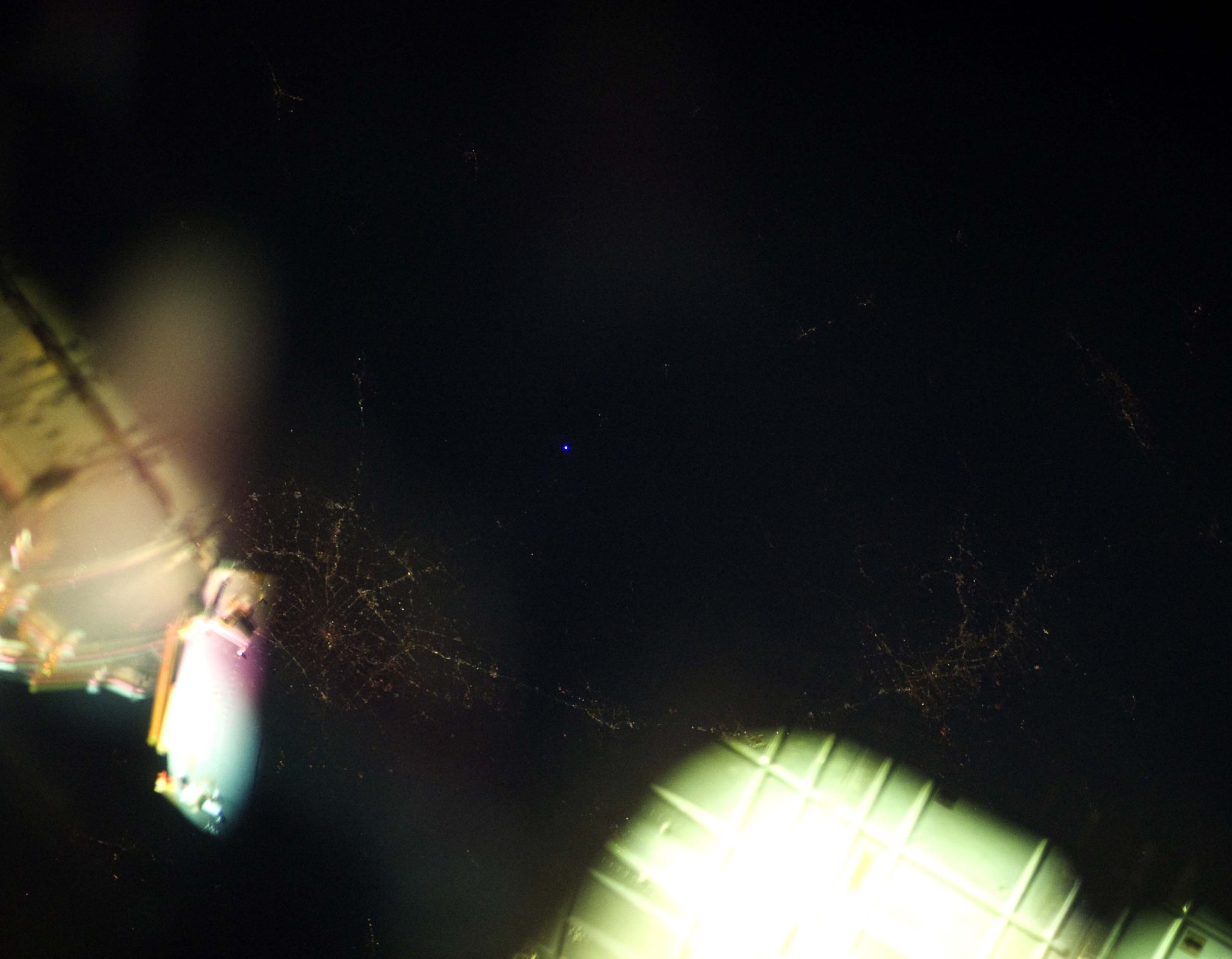 If you like cool, seemingly odd, but ultimately insightful experiments I highly suggest looking through his tweets and clicking into his blogs. He does many random experiments which have garnered him scientific patents and entries in research papers.

Quotes from an airspace article:

Early Sunday morning, at 01:27 our time, the San Antonio Astronomical Association, an amateur astronomy group, succeeded in flashing the space station with a one-watt blue laser and a white spotlight as we passed overhead. This took a number of engineering calculations. Projected beam diameters (assuming the propagation of a Gaussian wave for the laser) and intensity at the target had to be calculated. Tracking space station’s path as it streaked across the sky was another challenge. I used email to communicate with Robert Reeves, one of the association’s members. Considering that it takes a day, maybe more, for a simple exchange of messages (on space station we receive email drops two to three times a day), the whole event took weeks to plan.

Another photo of the light, from this source (I am unsure if they are the same image): 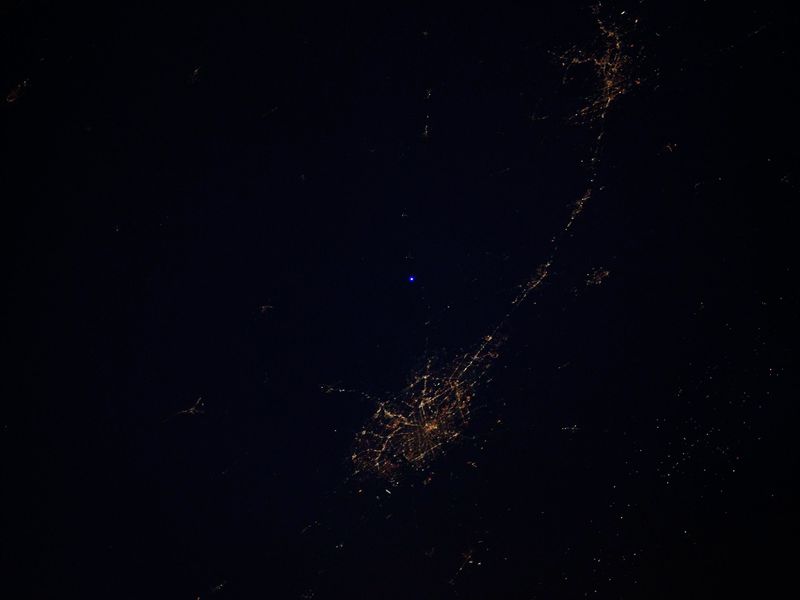 Note: This is all paraphrased from a talk he gave at NEAIC, so if it's wrong please correct me.

Should be noted that a 1 watt laser is far more powerful than the one you buy to tease your cat. At least in the US, the most powerful one a normal person can legally buy is only 5 milliwatts...

It was a 1 watt laser pointer.

This has happened at least once, on March 4, 2012, there was an experiment to do just that.

Not the answer you're looking for? Browse other questions tagged photography earth-observation or ask your own question.

5
Was there once a semi-serious space-art project planning to use solar reflectors to put a spot of light on the crescent Moon?
8
Can Astronauts really see firework displays from space?
2
Has anyone in space beyond LEO seen or has anything photographed a non-pointer laser from Earth?