Could a CubeSat be propelled by this low-tech electromagnetic propulsion system?

I have come up with a conceptual idea for a low-tech electromagnetic propulsion system for a CubeSat, and I would like to know if it would create (on a theoretical basis) a net force strong enough to keep a CubeSat in orbit and/or propel it through interplanetary space.

Please reference the conceptual drawing below.

The working principle is that as an electromagnet on each lever is pulled towards each other via their interacting magnetic fields, each lever will be pulled away from the post that it is pivoting on, and this pulling force being exerted on each post will create a net force on the board that should propel the board (and thus the CubeSat) in the direction indicated on the drawing.

Also, I believe that the levers should rotate around high-friction shaft bearings. These would be ideal for this system because the harder it is for the electromagnets to rotate the levers, the longer the levers will be in the Points B/C to Point A area of the board and should thus generate more net force during each full revolution of the levers, yet I don't know if this would be true or not. The trade off with using high-friction shaft bearings is that a lot of heat would be generated.

Would this low-tech electromagnetic propulsion system actually work and would the net force created be enough to keep a CubeSat in orbit and/or propel it through interplanetary space? 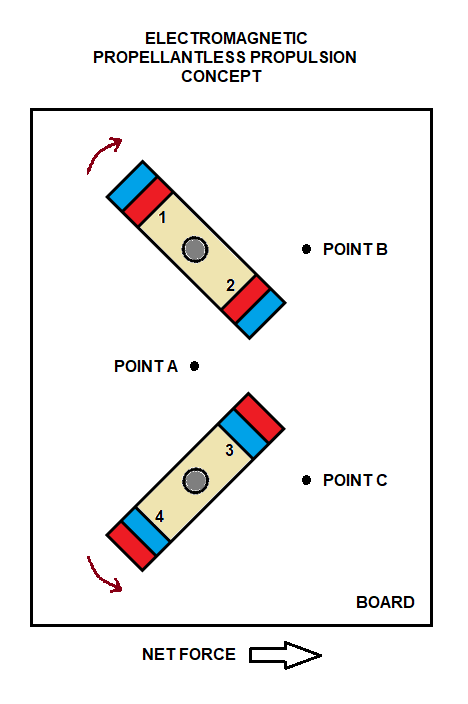 Could a CubeSat be propelled by this electromagnetic propellantless propulsion system?

No, I'm pretty sure it can't, unless it is very large (kilometers or larger).

Because permanent magnets and electromagnets only provide dipole and higher magnetic moments, there is no way to propel yourself in a uniform magnetic field. You need monopoles to do that.

The electric analog is the same; put an electrostatic dipole in a uniform electric field, and it will feel a torque, but no net force.

However, if your system is very large, say kilometers or more, you might be able to use the very weak gradient in the Earth's field to gain a very tiny amount of forward or backwards propulsive force, though I'm not sure.

4
Could artificial magnets orbiting the sun be used to accelerate spacecraft, like a magnetic "gravity" assist?
1
Could a horseshoe magnet help a satellite stay in orbit?
1
What are the forces affecting superconducting MRI-magnet on low-earth orbit and could you accelerate a satellite with these forces?
1
What are all the kinds of electric propulsion that don't qualify as ion propulsion in standard spaceflight lingo?