What's the “big monstrosity” mentioned by the Apollo 11 crew?

Mission day three, sitting in lunar orbit, the LM docked to the CM, and this conversation happens: 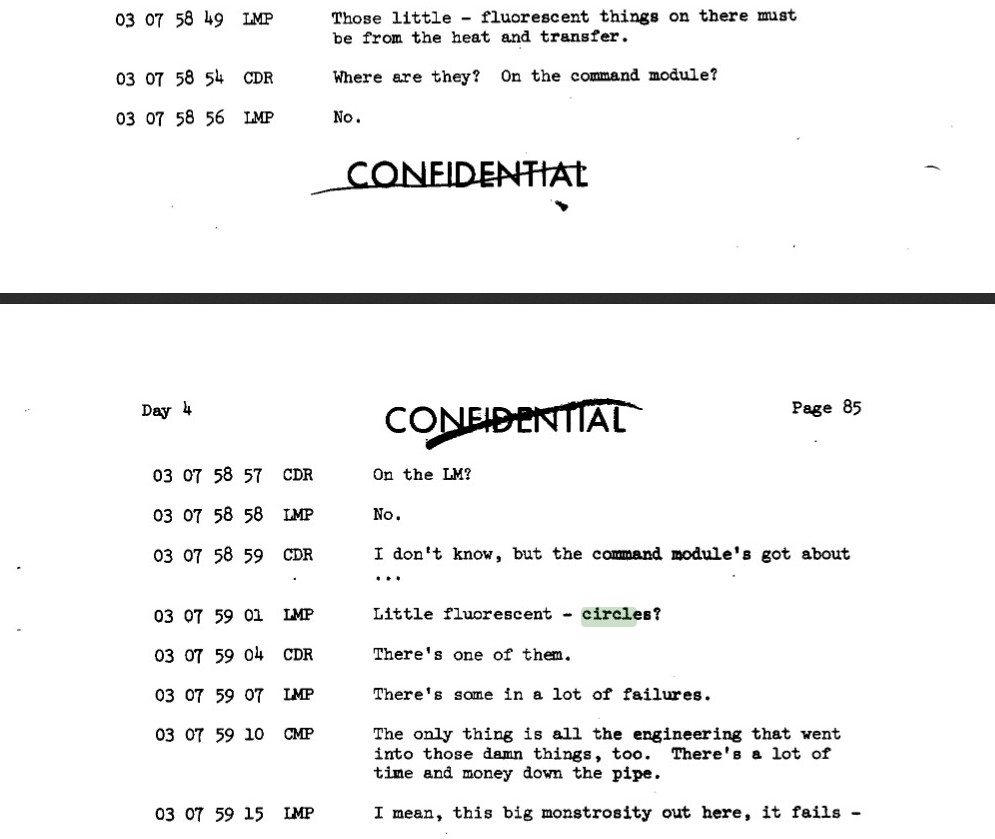 What are they talking about? "Little fluorescent circles"? "All the engineering that went into those damn things?" And what's the "big monstrosity"?

Transcript from here (onboard voice)

This seems to be a case of the "visual light flash phenomenon" described in section 8.2.2.2 of the Apollo Program Summary Report:

Astronauts of Apollo 11 and subsequent lunar missions reported seeing flashes of light while relaxing in the darkened command module or while wearing light-tight eye shades. These events were generally described as colorless star-like flashes, narrow streaks of light, or diffuse light flashes. The flashes were observed during translunar coast, in lunar orbit, on the lunar surface, and during transearth coast. The frequency of occurrence of the light flashes typically averaged about one flash every 1 to 2 minutes.

I believe that Armstrong and Aldrin feared at the time that the phenomenon was caused by their spacecraft failing. That would be the references to "the engineering that went into those damn things" and "this big monstrosity". Fortunately, the spacecraft was fine, and the phenomenon was attributed to cosmic rays:

Not the answer you're looking for? Browse other questions tagged history apollo-11 audio or ask your own question.

3
What's the story behind this Apollo-era image?
19
Would Luna 15 have been visible to any of the members of the Apollo 11 crew?
2
Apollo 11 ascent data/observation mismatch
21
How were the Flight Journals of the Apollo missions originally transcribed/recorded?
4
Who were the major manufacturers of the Apollo 11 rocket?
19
Who filmed the Apollo 11 trans-lunar injection?
12
Did the 1202 error and associated reboot prevent disaster on Apollo 11 landing?
5
Why did a phase mismatch between the Apollo 11 LM's RR and AGC generate a large numbers of interrupts?