How were Apollo spacesuits cooled during simulations/rehearsals on Earth?

The answer and comments to How have space suits dissipated the heat removed from astronauts? explain that the Apollo space suits used the sublimation of ice into the vacuum of space to constantly dissipate 300 to 500 Watts of heat from a space suit while in space, depending on which source you take.

The heat was produced both by the astronaut and some of the support equipment and electronics.

Water was continually exuded onto a carefully designed surface exposed to space, where it quickly froze, and then sublimated from solid to gas molecules, carrying away heat.

The Gizmodo article Real Apollo 11 Training Photos Look Like Prep For a Fake Moon Landing shows many photos of Apollo astronauts rehearsing specific movements and operations on Earth that would later be done on the Moon. They appear to be wearing complete space suits, though it's questionable if they were wearing fully equipped support systems since on Earth their weight would be quite different than when they'd be in the Moon's 1/6 Earth gravity. 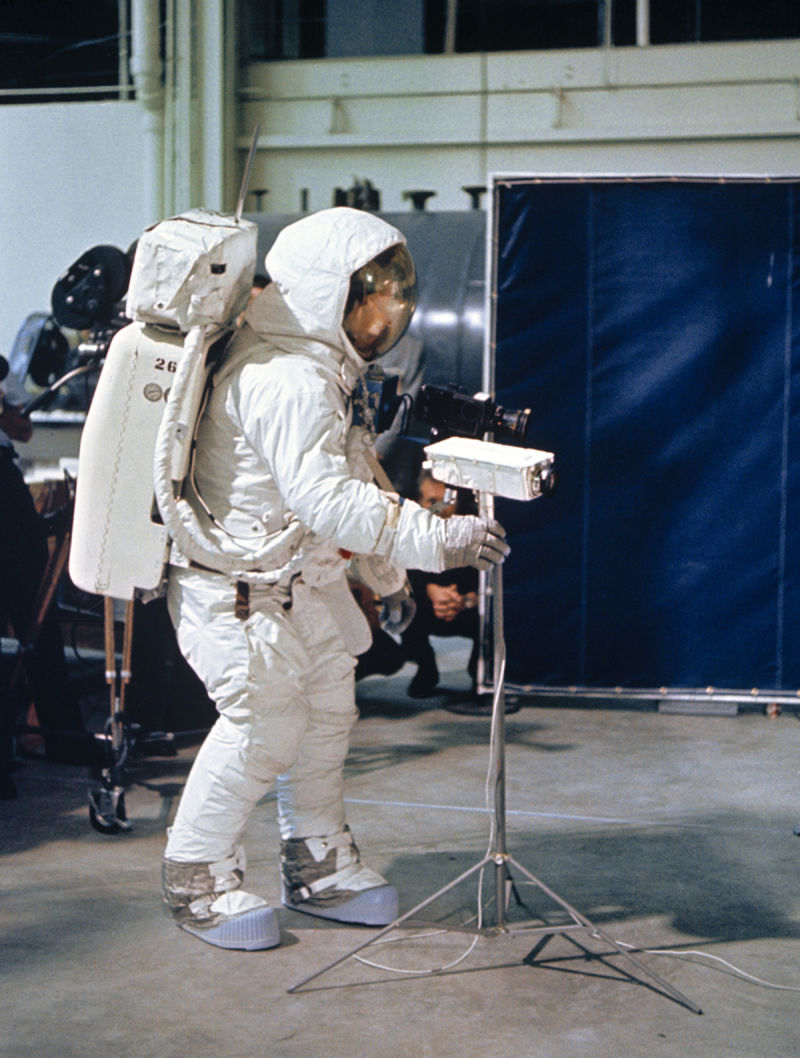 above: "Neil Armstrong practices using a video camera during a lunar surface simulation at the Manned Spacecraft Center in Houston."

below: "Neil Armstrong opens a sample return container next to the Modular Equipment Stowage Assembly and the Lunar Module mock-up on April 18, 1969." 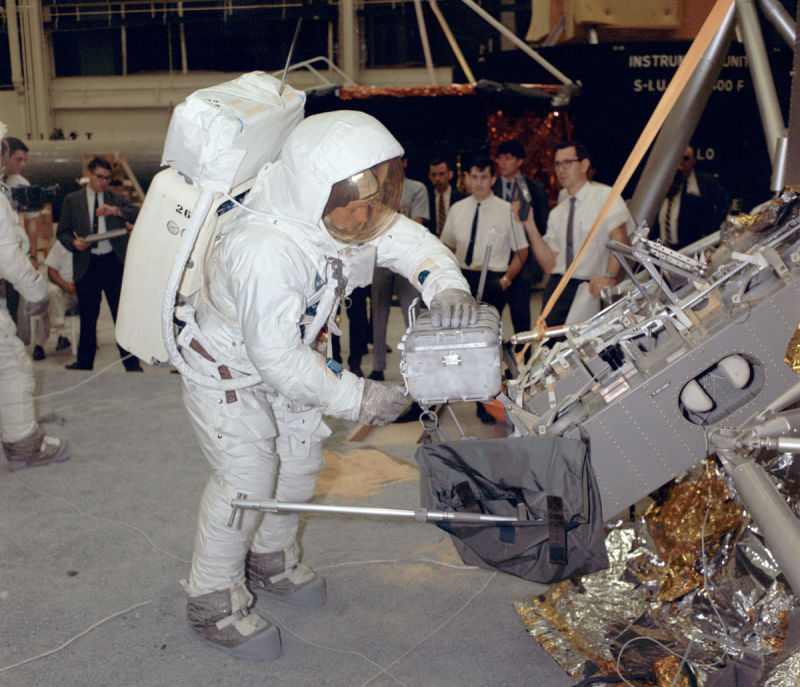 (I'm one point short of 10k reputation. Hope this puts me over the top!)

IRWIN: The work on the lunar surface was not much different from what we experienced on the rock pile. We didn't sweat as much, but it seemed like the work was about the same.

SCOTT: If we could get LCGs in the training suits, and the training backpacks, we'd have an excellent simulation of the lunar surface, in spite of the fact that you'd have the heavy backpacks. That was excellent training. I agree with Jim. The surface operations were not too much different from what we'd experienced on the rock pile. You gain an awful lot by going out there and working on the rock pile back of the simulator building.

The addition of the geology stops there at the Cape is good. We didn't have the opportunity to exercise all those rocks they'd put out there for us, but I think the following crews will find it very useful to drive the Rover and go through the procedures of getting off the Rover and doing the geology, the sequence of events with the high gain antenna, the LCRU, and everything. It was very good training.

Some the pictures there show training in the later A7Ls that could be worn on the rover.

Apparently due to budget reasons, some of the later training had to use suits that were already used on the moon. Sad.

Not the answer you're looking for? Browse other questions tagged apollo-program spacesuits simulation cooling or ask your own question.

24
How did astronauts frame photos without a viewfinder?
9
Why did the hose connectors on Apollo spacesuits come in pairs?
10
How have space suits dissipated the heat removed from astronauts?
3
How will the future Mars Space Suit Helmet design protect Astronauts from Martian Radiation?
2
What spacesuits did the Apollo astronauts wear on Earth in their training for the Moon?

16
Could the Apollo 13 crew have survived the CO2 issue using their spacesuits
9
Will suits worn on Mars lose kilograms of "expendable water" each time they are used?
8
Why did moon dust not cause problems on Apollo during the return flight from the Moon?
19
Usage of Apollo Lunar Surface Hasselblad Camera with 500 mm lens?
15
Did astronauts on the moon poop in front of each other?
4
Who are these people inside Apollo Command Module (presumably posing for advertisement photoshoot)?
2
What spacesuits did the Apollo astronauts wear on Earth in their training for the Moon?
7
How many spacesuits were specifically manufactured for John Young?
17
Where exactly are the Apollo space suit sublimators venting steam into space? is there a photo of an astronaut in space that shows the opening?