How were hypergolic propellants delivered to the Shuttle launch pad?

The Space Shuttle Main Engines used cryogenic hydrogen and oxygen, and this question explains how those were supplied to the launch pad. But the OMS and RCS engines used hypergolic fuels. How were these delivered to the launchpad?

During Apollo, they were delivered to the pad by tanker trucks. Did the Shuttle program do essentially the same thing?

The [Apollo] spacecraft is loaded first with hypergolic propellants. A tanker van carrying 96,000 pounds capacity of nitrogen tetroxide pulls up beside the Mobile Service Structure and fill lines are connected to it. The oxidizer is transferred at 60 gallons per minute to the Apollo service module which requires 2,500 gallons. Next, about 60 gallons are loaded into the lunar module ascent and descent tanks and reaction control system.

Next day a tanker of 43,000 pounds capacity transports aerozine-50 fuel to the site and its fill lines connect with a separate fuel distribution system of the service structure. About 2,100 gallons of the fuel are loaded into the Apollo service module and 1,200 gallons in the lunar module tanks. A small and separate source provides 100 gallons of monomethyl­ hydrazine, and 25 gallons of nitrogen tetroxide are loaded into two auxiliary propulsion system tanks of the Saturn V third stage at the same time the spacecraft is fueled.

They were indeed brought in by tanker truck and stored in the "oxidizer farm" and "fuel farm" areas of each pad. 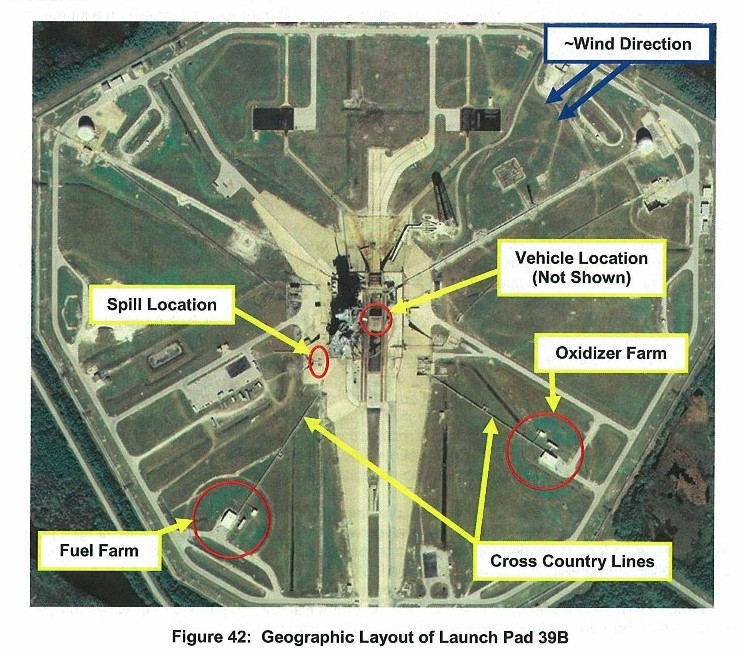 Info and image from HYPERGOLIC PROPELLANTS: THE HANDLING HAZARDS AND LESSONS LEARNED FROM USE, which is a fascinating account of many accidents and incidents in and around the pad, the fuel farms, and the tankers.

23
How are cryogenic rocket propellants delivered to the launch pad?
19
How much fuel was used for a Space Shuttle launch?
11
How did the Space Shuttle keep its cryogenic fuel cold?

9
What's the white tall tower with a tank near Space Shuttle launch pad?
23
How are cryogenic rocket propellants delivered to the launch pad?
6
Apollo/Shuttle launch site fuel handling
10
What holds the Space Shuttle orbiter itself stable on the launch pad?
4
Slide rope way from launch pad of space shuttle?
15
What happened to boiled-off gases from the storage tanks at Launch Complex 39?
7
Loading tanks for supercritical oxygen and hydrogen on the launch pad, how to achieve low temperature and high pressure?
5
Why would the Shuttle-Transtage have been unusable for science missions?
4
Did any Apollo missions have enough fuel left to bring back the LM ascent stage?