Was all the fuel expended in each stage of a Saturn V launch?

Particularly the first and second stages into earth orbit - were the stages run dry before separation? On first thoughts, It would seem to be safer to do so, but I realised the engines required liquid fuel to act as a coolant prior to ignition in the combustion chamber. Also, the final orbit might not be so precise if there's variation to the launch profile.

So, the question becomes: how much fuel was left in each stage?

I'd expect any excess fuel to be kept to a minimum since it is expensive (fuelwise) to lift unburnt fuel.

If answers can include the third stages and supply modules, that'd be great.

For the Saturn V, the first and second stages both cut off when a low-propellant-level sensor tripped in the tanks. Most launchers' booster stages do something similar -- burning to total depletion would be dangerous for a number of reasons noted here.

For the S-IC first stage, it wasn't unusual to leave 30 tons of propellant unconsumed, as Apollo By The Numbers notes. This is a little more than 1% of the total stage tankage, and represents about 2 seconds of burn time.

For the S-II second stage, the residual propellant was usually 3-4 tons -- less than 1% of the initial amount, and again representing 2-3 seconds of burn time.

The orbital insertion burn on the S-IVB third stage, as with most orbital launchers, was cut off when the desired target velocity was reached. This allowed the stage to correct for off-nominal performance of the first and second stages -- it would do whatever it needed to do to get to the right altitude and speed.

Most of the fuel in the third stage was saved for the translunar burn, which was likewise stopped when the desired change in velocity was accomplished, again typically with 3-4 tons of fuel remaining, though that represents 10-15 seconds of burn time for the smaller, single-engine stage.

I took the numbers from 'Apollo by the Numbers' and entered them into a spread sheet. 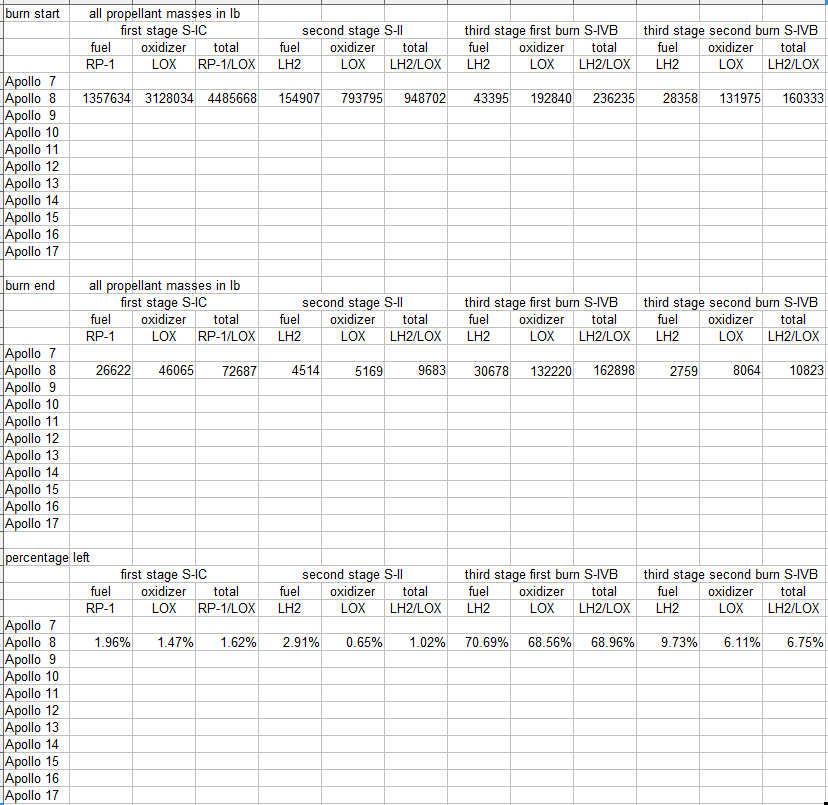 Not the answer you're looking for? Browse other questions tagged apollo-program saturn-v or ask your own question.

42
Do booster stages run out of fuel, or are they purposefully shut off?

13
How would the Saturn V have differed if the first stage was also LH2/LOX?
32
Why was this Saturn rocket elevated for launch?
6
Was CNC milling used in the 1960's for making the Apollo/Saturn rocket engines?
1
Was the Saturn V only going at 1.1km/s after the first stage?
14
Why was the Saturn V considered to be human-rated after Apollo 6?
29
Why was ramjet fuel used as hydraulic fluid during Saturn V checkout?
8
Saturn V Small Rectangles On S-II Stage
5
Are there any markings that uniquely identify each Saturn-Apollo combination?