What does it mean when the Voyagers “switch thrusters”?

As another example of the probes' need to adapt to circumstances to keep going, Voyager 2 has fired up its correction maneuver thrusters on July 8th, 30 years after it was last fired. Its attitude control thrusters are old and haven't been working as well, requiring the probe to fire an increasing number of pulses to make sure its antenna keeps pointed at our planet. Now, the spacecraft has switched thrusters like the Voyager 1 did in 2018, and will be using them to correct its orientation.

Question: What does it mean when the Voyagers "switch thrusters"? What exactly was switched from/to, and how was the switch implemented?

Voyager's thrusters are in 3 groups:

This article talks about the switch made on Voyager 1.

In the early days of the mission, Voyager 1 flew by Jupiter, Saturn, and important moons of each. To accurately fly by and point the spacecraft's instruments at a smorgasbord of targets, engineers used "trajectory correction maneuver,” or TCM, thrusters that are identical in size and functionality to the attitude control thrusters, and are located on the back side of the spacecraft. But because Voyager 1's last planetary encounter was Saturn, the Voyager team hadn't needed to use the TCM thrusters since November 8, 1980. Back then, the TCM thrusters were used in a more continuous firing mode; they had never been used in the brief bursts necessary to orient the spacecraft.

On Tuesday, Nov. 28, 2017, Voyager engineers fired up the four TCM thrusters for the first time in 37 years and tested their ability to orient the spacecraft using 10-millisecond pulses. ....

Lo and behold, on Wednesday, Nov. 29, they learned the TCM thrusters worked perfectly -- and just as well as the attitude control thrusters.

So they're switching from the attitude control thrusters to the TCM thrusters.

The plan going forward is to switch to the TCM thrusters in January. To make the change, Voyager has to turn on one heater per thruster, which requires power -- a limited resource for the aging mission. When there is no longer enough power to operate the heaters, the team will switch back to the attitude control thrusters.

The thruster test went so well, the team will likely do a similar test on the TCM thrusters for Voyager 2, the twin spacecraft of Voyager 1. The attitude control thrusters currently used for Voyager 2 are not yet as degraded as Voyager 1's, however.

What about the backup attitude control thrusters, you ask? They were already in use by 2011.

Voyager 1 and Voyager 2 are each equipped with six sets, or pairs, of thrusters to control their movement. These include three pairs of primary thrusters and three backup, or redundant, pairs. Voyager 2 is currently using the two pairs of backup thrusters that control the pitch and yaw motion of the spacecraft. Switching to the backup thruster pair that controls roll motion will allow engineers to turn off the heater that keeps the fuel line to the primary thruster warm. ...

The thrusters involved in this switch have fired more than 318,000 times. The backup pair has not been used in flight. Voyager 1 changed to the backup for this same component after 353,000 pulses in 2004 and is now using all three sets of its backup thrusters.

This is the thruster layout:

You can see the Attitude Control thrusters (indicated in red) are placed in groups of 2. These are primary and backup thrusters. Labels give the thruster direction: +R and -R are roll.

The 4 thrusters indicated in blue are the Trajectory Control thrusters. 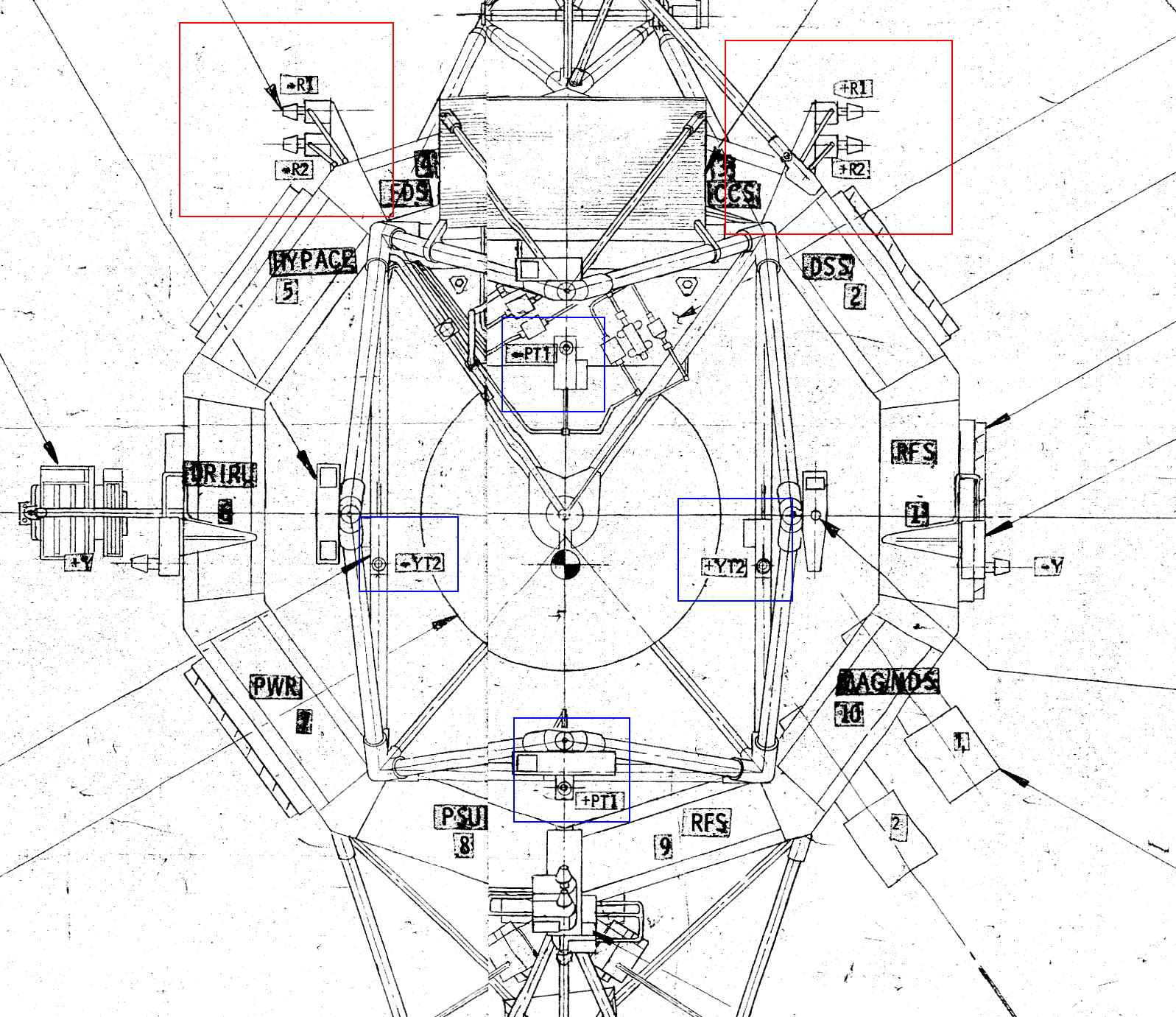 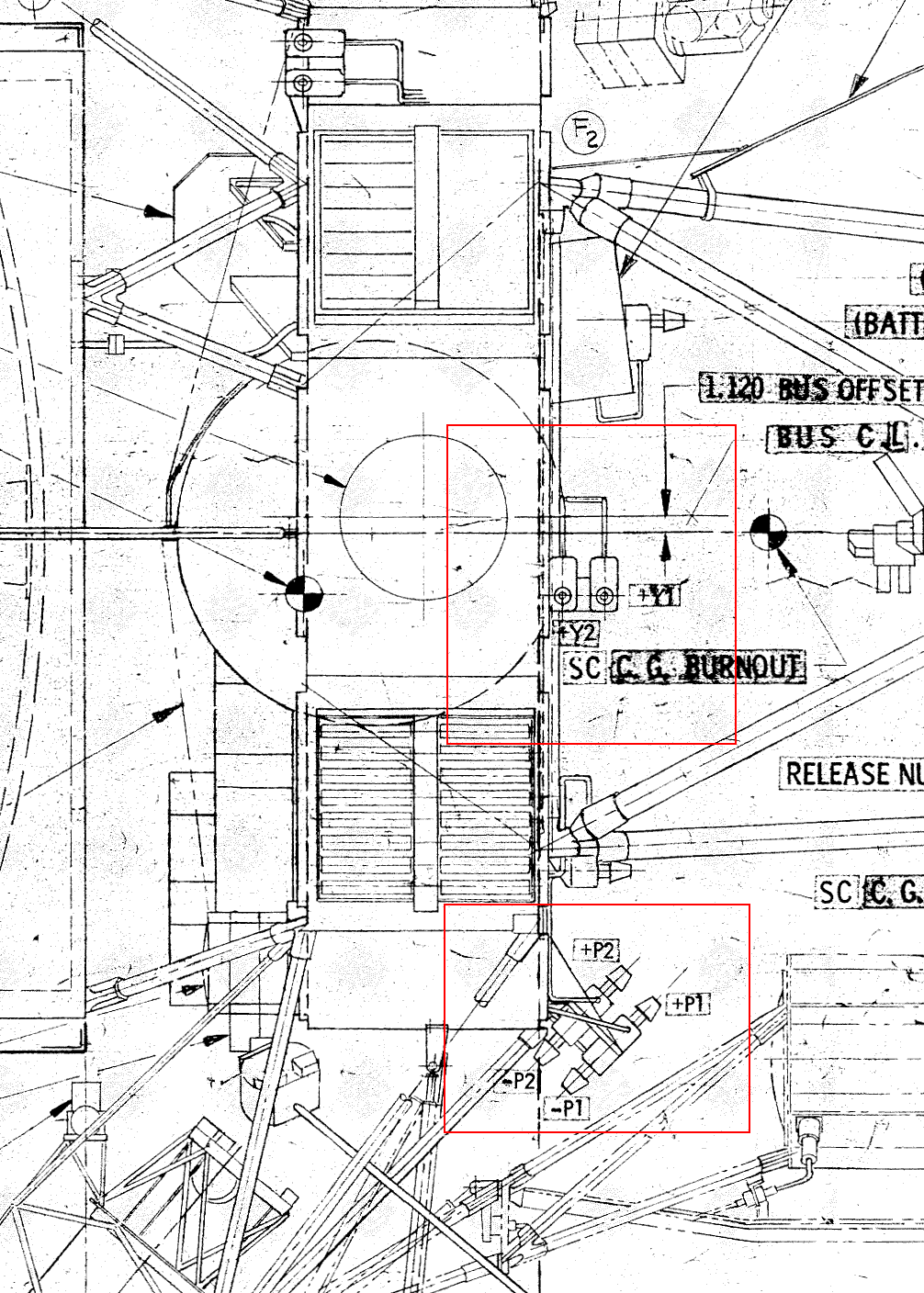 Each axis has 2 thrusters, + and -, so 6 thrusters needed to rotate around each of the 3 axes. This is one branch.

Source: a document named 'Voyager blueprint.gif', the title block identifies it as 'Mariner Jupiter Saturn '77 spacecraft mechanical configuration 6', JPL, dated 1974. I can't recall where I found this (I suspect it's from the space-modelers Yahoo group). Too large to upload here (13000x5000 px, 3.5 Mb).

Not the answer you're looking for? Browse other questions tagged voyager thrust adcs or ask your own question.

17
Does the Voyager team use a wrapper (Fortran(77?) to Python) to transmit current commands?
13
How do Voyager 1's Trajectory Control Thrusters differ from its Attitude Control Thrusters?
11
How are the Voyagers' thrusters configured in a novel way to minimize accelerations along Earth-spacecraft axis?
5
Could the Voyager spacecraft be spin-stabilized to keep their high gain antennas pointing towards the Sun (and therefore Earth)?
5
How much do the Voyagers' attitudes drift over time? How often are their thrusters used for attitude control?
2
Did any of Voyagers' receivers' front ends take advantage of the “cold of space” to lower noise?
0
How are Voyager's 16 thrusters oriented?

11
How are the Voyagers' thrusters configured in a novel way to minimize accelerations along Earth-spacecraft axis?
5
How does Voyager 1 keep track of its orientation?
5
How will GomX-4B manage angular momentum when using butane thrusters to move?
4
How do Mars spacecraft control attitude on final descent and landing?
3
How many times would two astronauts have to run around Skylab to turn it by 10 arc minutes?
0
Are the Voyager spacecrafts' X-band TWTAs currently set to high or low transmit power? How often were they changed?
5
Could the Voyager spacecraft be spin-stabilized to keep their high gain antennas pointing towards the Sun (and therefore Earth)?
10
How hard was it for the Shuttle to perform attitude control for the entire ISS? Did they have to calibrate?