Were launchpads at KSC built with pilings or footings?

Considering the importance of keeping a launchpad level, were pads 39A or 39B at Kennedy Space Center built with pilings or footings down to the bedrock?

As seen in the quotes below, I have found information on the Vehicle Assembly Building (yes) and on the crawlerway (no), but not on the launchpads. Although I am primarily interested in 39A/39B, other Kennedy or Canaveral launchpads would be appropriate here.

It was decided to support the great weight [of the VAB] upon open end steel pipe pilings, 16 inches in diameter and three-eighths of an inch thick, driving each pile to bearing on the rock formation. Blount Bros., the contractor, required six months, beginning in May 1963, to drive 4,225 steel piles through the upper limestone layer to bedrock. This was the equivalent of 128 miles of steel. [p. 20]

To prepare [the crawlerway] base, more than 3,000,000 cubic yards of fill were dredged from the adjacent barge channel and allowed to compact the subsoil to 95-per cent density, almost the hardness of rock. Six feet of crushed stone was then applied and packed to maximum density. Above this layer is 12 inches of selected hydraulic fill. The bed was topped and sealed against moisture with an asphaltic prime coat and then covered by loose Alabama river rock, eight inches deep on curves and six inches deep on the straightaway. [pp. 33-34]

Based on this article, 39A is just concrete on top of sand. That does seem a little ridiculous though.

The pumps piled up another portion of the dredged sand on the launch pad, creating a flat-topped pyramid of sand and shell 80 feet (24.4 meters) high. During the process, draglines, bulldozers and other earth-moving equipment molded the mound into the approximate shape of the pad. In a short period of time, the pyramid settled 3.9 feet (1.2 meters), compressing the soil beneath. Bulldozers completed the job by removing part of the pile to achieve the proper elevation. 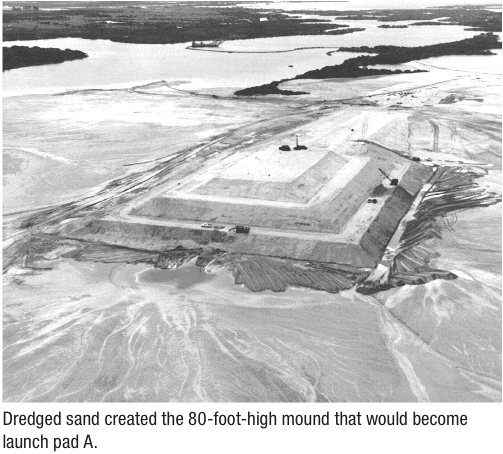 Page 4 of the article describes the VAB's pilings in considerable detail, so it would be surprising if it didn't even mention pilings elsewhere. Perhaps the difference in weight explains the launch pad's lack of pilings: the launch pad's load was 7500 tonnes, while the VAB included 45000 tonnes of steel and 38000 m3 of concrete (91000 tonnes). I'm not sure how much the launch pad itself weighed, but overall it seems to be many times lighter than the VAB. Also, the VAB's pilings held the building down against wind loads, which were much larger than for the launch pad.

Not the answer you're looking for? Browse other questions tagged launchpad geology kennedy-space-center or ask your own question.

45
What is the difference between Cape Canaveral and Kennedy Space Center?
18
What is the base of a launchpad made of?
18
Was LC39A built with a rocket much larger than the Saturn V in mind?
7
Launchpad platform structural design

5
Who has built the largest number of Transport/Erector/Launch (TEL)?
9
What are/were the rails leading into the flame trench of pad 39A used for?
14
How much water is used at the Kennedy Space Center (KSC)?
17
Why do KSC crawler-transporters use caterpillar treads instead of rail tracks?
18
Was LC39A built with a rocket much larger than the Saturn V in mind?
3
What measures were taken to clear wildlife from the Shuttle Landing Facility?
4
Why do personnel in the KSC launch control room face away from the launchpad?
1
How many maritime launch platforms were ever built?
4
What prompted NASA to establish a KSC SWAT Team?