In the movie First Man we see that there were problems with some button, when Buzz said "We should tell them about that." Also there was an alarm, that they then turned off.

These were the "1202" and "1201" program alarms, which were warning signals that the lunar module's computer was becoming overloaded.

During Apollo 11's descent to the moon, the crew left the LM's rendezvous radar, which was used to find their way back to the command module, switched on in the "SLEW" mode, so it would be ready if they had to abort the landing.

This meant that the guidance computer was processing the data from the rendezvous radar at the same time as it was trying to run the landing guidance program. This nearly overloaded the computer's processing capability.

When Aldrin asked the computer to compute and display a certain figure called delta-H, this was just enough additional processing load to put the computer over the edge; it began dropping low-priority tasks like updating the display, but the software was designed to keep the high-priority tasks, like steering the lander, running. When it dropped the low-priority task it would activate the master alarm and display an error code, 1202. Aldrin and Armstrong weren't familiar with this code, so asked mission control for an explanation:

Fortunately, just days before Apollo 11 launched, the team working on the computer assembled a list of all the possible program alarms, and steps to be taken if they occurred. The notes for 1202 said that if it happened intermittently there was no need to abort. The controllers consulted the list, gave the go to CAPCOM Charlie Duke, who relayed it to Eagle:

A short while later, the alarm fired again. Aldrin made the connection that the alarm occurred when he was trying to monitor delta-H; mission control told the crew they could monitor delta-H from the ground.

A little later on, the computer started giving 1201 alarms, a very slightly different symptom of the same basic issue, and again they got the go:

The alarms were very distracting, forcing Armstrong to direct his attention inside the cockpit right as he needed to be focused on finding a good landing site, which may have contributed to the long descent time and high fuel usage of the landing.

With just seven and a half minutes remaining before they were set to touch down on the moon, Armstrong and Aldrin reported a program alarm. "It's a 1202."

The 1202 alarm indicated that the guidance computer was being overloaded with tasks. It was having trouble completing its work in the cycling time available.

"We looked down at the list at that alarm, and, yes, right, if it doesn't reoccur too often, we're fine," reported Garman.

Give us a reading on the 1202 program alarm," Armstrong radioed, with a bit more urgency in his voice.

"We're go on that, Flight," Bales advised Kranz. Before the flight director could respond, capcom Charlie Duke relayed the news to the crew, "We're 'Go' on that alarm."

"When it occurred again [it was] a different alarm but it was the same type," Garman recounted. "I remember distinctly yelling — by this time yelling, you know, in the loop here — "Same type!" and [Bale] yells "Same type!" I could hear my voice echoing. Then [Duke] says, "Same type!"

So what was happening during Apollo 11, as I recall, was that repeated jobs to process rendezvous radar data (that of course were not really there) were scheduled because a misconfiguration of the radar switches. Thus, the core sets got filled up and a 1202 alarm was generated. The 1201 that came later in the landing was because the scheduling request that caused the actual overflow was one that had requested a VAC area.

What happened next in either case was what you described as, 'The computer has been programmed to recognize this data as being of secondary importance and will ignore it while it does more important computations.'

On Apollo 11, each time a 1201 or 1202 alarm appeared, the computer rebooted, restarted the important stuff, like steering the descent engine and running the DSKY to let the crew know what was going on, but did not restart all the erroneously-scheduled rendezvous radar jobs.

So what happened? Crossed wires. During the design of the guidance computer at MIT’s Instrumentation laboratory, Buzz Aldrin wanted the computer to be able to simultaneously handle radar data from the lunar surface and the Apollo Command and Service Modules in lunar orbit, just in case Apollo 11 needed to abort the landing and rendezvous with the CSM. Despite discussions, the added capability was never built into the system, to Aldrin’s surprise on July 20th. (Simulations had never fully tested the feature and failed to reveal its absence.)

Supplementary answer (these answers cover it well, but there are a few other things of interest):

For anyone interested in the details of this issue, the book Sunburst and Luminary by Don Eyles has, I think the definitive treatment. Eyles was the LEM descent guidance software programmer!

Eyles explains that the problem was actually found on the ground twice, independently.

The first time was by Grumman running tests at Bethpage on LM-3 in May 1968.

The report correctly diagnosed the problem but then, instead of proposing a fix, dismissed the issue with the breathtaking rationalization that the rendezvous radar switch would only ever be in SLEW or AUTO if the PGNCS had failed - oblivious to the fact that this unguarded switch had the potential to cause the PGNCS to fail, as it almost did on Apollo 11.

The second time was by George Silver, an MIT employee stationed at KSC.

George Silver identified the rendezvous radar interface problem at Cape Canaveral a month or two after Grumman discovered it in Bethpage. He wrote up the problem....and devised a solution that required a small hardware change.....We can only fault Silver for not making a bigger stink. He might not have gained approval for his fix, but a larger group would have known about the problem....

The crew had the radar configured per the checklist, but the checklist had been updated very shortly before flight and therefore had not been exercised very much in training.

Explanation of the radar mode switch:

The mode switch had three positions: LGC, AUTO, and SLEW. 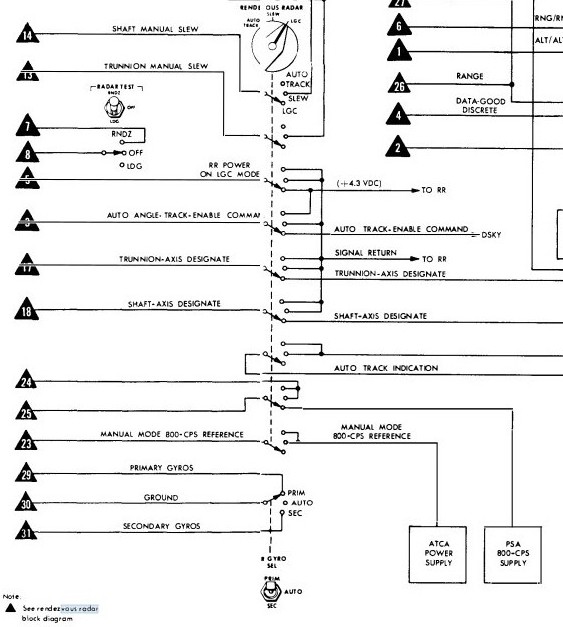 If the switch was not in LGC and the radar was on, the LGC could have problems processing the data depending on the phase relationship between the two 800 Hz signals, and this relationship was completely random, determined by when the LGC was powered on. The hardware fix proposed by Silver would have synchronized the two signals, eliminating the problem.

Addressing the "problems with some button" part of the question. Following is a quotation from a news source.

“It's generally been reported that when Armstrong returned the lunar module after the moon walk, his backpack broke a circuit breaker switch," said the source, an employee of North American Aviation who is one of the last to see Apollo astronauts before they are locked in their spacecraft.

“When that happened, it knocked out the normal ascent sequence firing program.”

Fortunately, Aldrin used a pen on the broken part of the switch to get it to work.

“But if he hadn't been able to, that would have thrown the whole ball of wax over to the abort guidance sequence," the story continued.

“And unless he could have activated it, there is no back-up for it– they would have had real problems. The only hope would have been the 16 little jets on the reaction control system. And I doubt if that could have taken them back to the command module.”

Regarding the "button" problem you were pointing to more precisely in another comment:

According to the Apollo 11 Journal, around the 102:03:35 mark and before, it seems related to the CWEA switch (Caution and Warning Electronics Assembly)

Not the answer you're looking for? Browse other questions tagged lunar-landing apollo-11 lunar-module or ask your own question.

13
Did the 1202 error and associated reboot prevent disaster on Apollo 11 landing?
6
Why did a phase mismatch between the Apollo 11 LM's RR and AGC generate a large numbers of interrupts?

8
Could the Apollo LM abort mode be engaged after touchdown? What would have happened if it was?
21
How were the Flight Journals of the Apollo missions originally transcribed/recorded?
6
What was the colour of the shoes used by the Apollo astronauts in moon landing?
0
What do you call the Apollo LEM plus CM (Command Module) when they are connected?
1
What is the meaning of "Bravo"?
24
Was it really necessary for the Lunar Module to have 2 stages?
8
Where in orbit was Michael Collins when the LM landed?
4
Does a full-scale Apollo lunar module mock-up exists that allows visitors to explore the inside?
7
Were more lunar module LiOH cartridges just a spacewalk away?
8
What was the nature of the communication problems during Apollo 11's Eagle's descent? How were other antennas selected?