NASA Launch Control: was all of its capacity ever used?

The NASA Launch Control Center at Cape Canaveral has 4 Firing Rooms. Each can support the launch of a spacecraft. Similarly, the VAB was divided into four bays, each large enough to support assembly of a Saturn V.

Was operational tempo ever high enough that more than one Firing Room was in use at the same time? 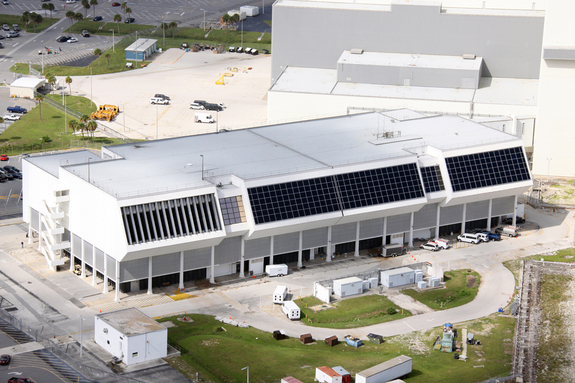 First of all, it's extremely important to have redundancy for something like this, in the event of there being an issue with one of the rooms. Furthermore, the various rooms can be used for training by different teams at the same time, although I doubt one is doing a live fire in one and having a training in another.

There have been a few instances of multiple NASA launches in a narrow time span, where I would expect multiple rooms to be in use. Specifically, the Gemini/ Agena launches, where Agena was a practice docking target, was launched within hours of Gemini (Usually 100 minutes before)

The decision to have 4 firing rooms was made in the early 1960s, before the Apollo missions (e.g. the Lunar Orbit Rendezvous plan) were worked out. At the time, some of the options included multiple launches to assemble the lunar expedition in space. So they built a complex that could accommodate any conceivable mission structure.

The Launch Control Center for Launch Complex 39 is attached to the Vehicle Assembly Building (VAB). It originally was designed with four Firing Rooms, one for each High Bay in the VAB. Up to four Saturn rockets could be stacked in the VAB at the same time, and each would have a dedicated Firing Room for test, checkout, and launch.

So a firing room would be in use from stacking to launch of a mission. This makes it likely that more rooms were used simultaneously.

I seem to remember an aerial photo of Cape Canaveral with two Saturns on two launch pads. Can't find it now, but that would have been an occasion when two rooms were in use at once.

In the end, 3 rooms were finished as control rooms during the Apollo program. Firing Room 4 was used as the project management room for construction of LC-39 and the Apollo systems integration.

Rocket Ranch: The Nuts and Bolts of the Apollo Moon Program at Kennedy Space Center has a diagram that which room was used for which mission.

During the Shuttle era, 2 firing rooms were used simultaneously:

... firing room 2, which is still operational as a space shuttle support facility. During a shuttle launch and a mission, NASA will staff the room with several managers and chief engineers, but will not place any command and control people there. Essentially, it seemed like the place for managers to observe the mission while the folks in Houston run it.

However, there are two other firing rooms, Nos. 3 and 4, where the prime shuttle operations are run out of KSC.

These days, Firing room 4 has been divided into 4 smaller rooms (page 25).

Not the answer you're looking for? Browse other questions tagged nasa apollo-program launch-site multi-launch or ask your own question.

18
Are Armageddon's simultaneous shuttle launches feasible?
4
Why did Kennedy have four control rooms but Houston had only two?

10
How does one dogleg from Florida to a sun-synchronous orbit?
5
Where did the families of astronauts watch the launch?
1
Why would an 8-minute burn result in a 6-month delay?
7
How were Apollo spacesuits cooled during simulations/rehearsals on Earth?
9
Why did the Vertical/Vehicle Assembly Building have four doors?
4
Why did Kennedy have four control rooms but Houston had only two?
2
What routinely happened in the TIROS control center? Was anything controlled there?
9
Why was Redstone Arsenal specifically chosen for post-war rocket development?
6
Were all three Mobile Launch Platforms ever in use simultaneously?