What pushes back on rockets? [closed]

Ask Question
Asked 2 years ago
Active 1 year, 9 months ago
Viewed 735 times
-12
$\begingroup$
Closed. This question needs to be more focused. It is not currently accepting answers.

I have removed the parts of the question regarding landing and the conic nozzle. Adding in those issues makes the question too broad.

What you see as different unrelated (or loosely related) questions are the elements of my inability to even understand what is being described.

If the question is too broad than it essentially means that the idea of asking about a "complete rocket" that is the constant mass rocket with its exhaust (closed system) and its interactions (with the outside) is impossible.

And with an open system it isn't even clear what "rocket" and "external world" is at any instant which is the crux of the matter.

In that case, rewording the question and splitting it means missing the whole point.

Revised question: Please address all answers and votes to this revised version of the question.

A rocket taking off on a launch pad sends a dense plume that pushes on the launch pad and is being redirected sideways.

Original question: This was the original wording of the question, retained so you can compare to the revised version above. It was revised to the version above because the version below was severely downvoted.

I find the claim utterly ridiculous: rockets at least in some cases do push back. A rocket on a launch pad is seen sending a dense plume that's being redirected side way; the plume pushes back on the launch pad; the rocket must be pushing back on the pad through it. There is no way this isn't the case at all in any situation, or you could start a rocket as close to the ground as you want, even fully on the ground, an obvious absurdity.

So the questions are:

Maybe the answers is almost never; I still can't understand why people wave away the issue and say there is no pushing back.

The questions are really just one question: is the plume from the rocket a support on which the rocket stands, and at some distance from the ground? How does the fluid transfer forces? (So that's two linked questions actually.)

Newton's Third Law states that if

Notice how the two bulleted clauses are nearly the same, except A and B have swapped roles, and the direction is reversed?

In a rocket, object A is the rocket and object B is the propellant. So we have the action

The reaction to this is that

So something (the propellant) is pushing on the rocket. The amount of this force is the same as the force of the rocket on the propellant. However, the direction is the opposite (up instead of down). So the rocket moves upward.

Newton's Third Law always involves two objects, never one or three. In this case, the two objects are the rocket and the propellant.

You can't do it with just the rocket, without the propellant. That would be just one object. A rocket without propellant won't accelerate.

So rockets do push back on matter, but it is their propellants, not the air or something else.

Addition: Another important concept to understanding the Third Law is that the forces are "equal and opposite" at exactly the same time. The amount of force between two objects can and often does change with time. However, forces do not remember what the other object did in the past, nor predict what the other object will do in the future. They only care about what happens at the same time.

Consider throwing a ball. The action is

which accelerates the ball. The reaction is

I think the principle you are thinking of is "ground effect".

When plane wings are very close to the ground, the deflected air is compressed slightly between the wing and the runway, thereby generating extra lift. For other reasons, it also reduces drag.

Planes fly parallel and close to the runway for several seconds and the ground effect can be significant, aiding in landings and takeoffs.

Something similar might happen when a rocket is close to the ground, but:

Rocket engines don't "push back" on anything. Rocket engines are basically controlled explosions. To find the answer of your question, we first need to know how a rocket engine works.

Rocket engines rely on Newton's third law of motion. "Every action has an equal and opposite reaction".

In the image above, liquid fuel and oxidiser come into contact with each other and is converted into thermal energy (hot gas). Now the gas has to escape somewhere, otherwise the combustion chamber will blow up. That's what the throat is, gas escapes the combustion chamber and goes into the nozzle where the energy is released and is then converted into kinetic energy. Works similar to a balloon when you accidentally let go of the balloon when you are blowing it for a birthday party. The direction of force is going out of the nozzle and according to Newton's third law, the reaction is the rocket going up. This is a very simple explanation of how a rocket works and as you can see, it doesn't "push back" on anything.

In your question when you said:

the plume pushes back on the launch pad; the rocket must be pushing back on the pad through it

I'm assuming you were looking at a space shuttle launch but not all rockets have a dense plume like the space shuttle. 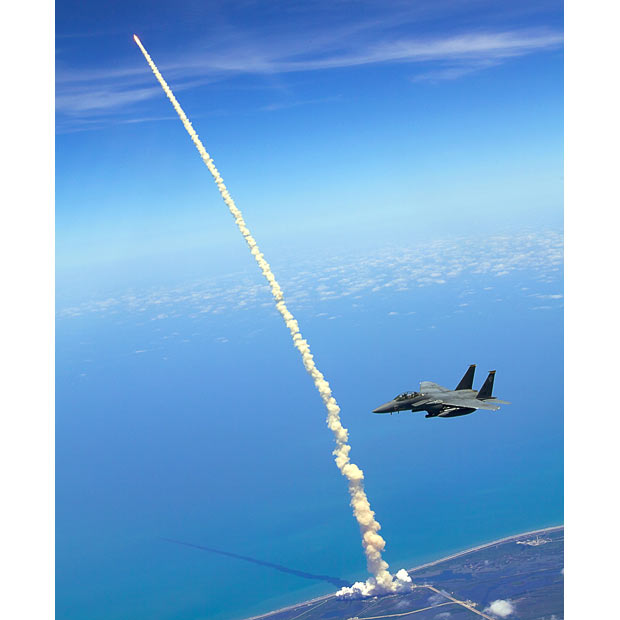 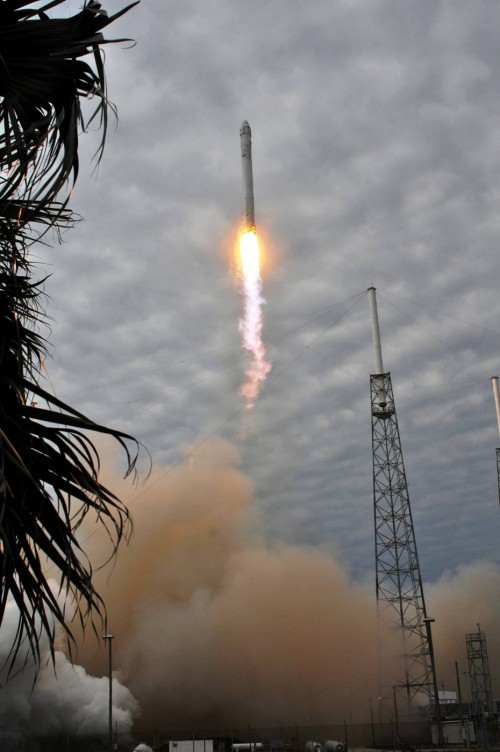 What i'm trying to imply is that the plume is simply the exhaust and while it does apply force to the launchpad (at launch), it doesn't affect the rocket. A rocket can launch mid-air (such as upper stages of a rocket) even though it doesn't "push back" on anything. If rockets had to push back on something, then rockets won't work in a vacuum as there's nothing there. Rocket exhaust only pushes on the rocket when it's very close to the ground because the exhaust "reflects" off the ground but most of it is dispersed sideways (this is visible in almost every rocket launch), but even then, it's a very tiny amount (so tiny that it's basically not there). When the rocket's high in altitude, then no, the rocket does not "push back" like you stated in your question.

What does a rocket engine push on?

Here's a cross-section of a rocket engine:

In the nozzle, again the gases push on all sides equally except at the bottom.

So just from the expansion of the gases, you get a net force pointing upward.

When do rockets push back on matter?

During their entire flight in the atmosphere. This reduces engine performance.

You can already see this from the diagram above. Any force downward (from the rocket exhaust meeting the atmosphere) reduces the net force upward.

Thrust is defined as:

Pa is the atmospheric pressure. In the equation, Pa is in a place where it reduces the resulting thrust when Pa increases.

Why do you want an expanding nozzle?

The exhaust gas flow is accelerated by a diverging passage, so you want a large nozzle diameter. The nozzle diameter is limited by ambient pressure, though, roughly because you need the pressure in the nozzle to be higher than ambient.

Pc is large, so if you want to make Pe equal to Pa, you need a nozzle opening much larger than the throat (the spot where the combustion chamber meets the nozzle).

An alternative approach: Look at an individual molecule of exhaust product. It leaves the nozzle, and travels until it hits either a gas molecule in the air, or a molecule on the solid surface. This collision produces a force. But how can this force be transmitted back to the rocket?

The only way for this force to have an effect on the rocket is if the exhaust molecule travels back up, and hits the structure of the rocket, pushing the rocket up.

But the collision can send the molecule in every direction, and most of those directions are away from the rocket. So most of the exhaust collisions with the surrounding air do not contribute to pushing the rocket up, and the net effect of the atmosphere is negative (as I said above, reducing net thrust).

The air pressure in the plume is not larger than that of the surrounding air. It can't be: the plume is free to mix with air and will quickly equalize its pressure.

What (if anything) pushes back on the rocket?

Not the answer you're looking for? Browse other questions tagged rockets atmosphere launchpad thrust or ask your own question.

8
What is the practical limit on reusable chemical rockets?
11
What is the temperature inside a methane/oxygen rocket engine?
6
How are rockets guided to follow specific trajectory?
6
Shear forces between Shuttle, tank, and boosters - what pushes what?
16
Cause of apparent plume deflection on SES-10?
18
Was LC39A built with a rocket much larger than the Saturn V in mind?
6
How are umbilical connectors held in place until their intended detachment?
1
Confusion about reactive force of a rocket
19
What kept crosswinds from pushing Apollo rockets into their own gantry?