It's long been proposed to build rotating colonies (ring worlds) in outer space.

That concept can also be applied to surface colonies in low-g environments. (Luna is at 1/6th of Earth gravity; Mars is at 1/3.)

Conceivably, spacecraft built for long trips could rotate to provide artificial "gravity" as well. Creating a large cross-section might not be so great in light of the idea of collision with space debris, but at present I choose not to make a thorough evaluation of the practical concerns of that. Acceleration could also be produced by attaching a tether and counterweight to the habitable module. This would reduce cross-sectional area.

But, what is possible is not necessarily what is the best solution. Are rotating habitats considered the standard solution for long-term human habitations in low-g environments? If not... why not? 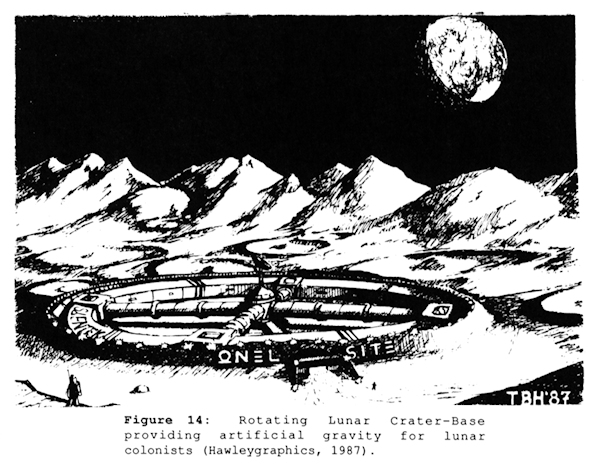 The current consensus is that living in zero G long term will have side effects, possibly lethal ones.

The current known ways to not have people exposed to zero G are:

Option one means that large amounts of energy are required arriving and departing, and is not very portable

Option two involves drive performance well outside anything feasible in physics as currently known, and may also have civilization ending side effects if built.

Option three is therefore the only one left hence showing up in designs. Even if the health effects can be managed there are tasks and processes easier to do with a defined 'down' (like eating, washing and using a toilet) that may justify the engineering complexity listed in DJG's answer.

This form of artificial gravity has additional engineering issues:

Possible solutions first bullet: Keep it spinning. Use photon momentum to spin it up and/or down. Get energy from solar panels.

... fourth bullet: See third bullet, part 2, and/or exit to other parts of the system through a tunnel which goes parallel to, and is concentric with, the axis of rotation... kind of like the hole in a toilet bowl. Use a magnetic bearing for the seam. OR, go between via spacewalk.

Space habitats do rotate, but not for artificial gravity.

50
Why are there no spacecraft rotating for artificial gravity?