The image below is from the really interesting page Inventing The Interplanetary Probe (linked by @A.Rumlin here).

Above the fluxgate magnetometer there is a pair of short tubes labeled "Variometers". These are not this kind of Variometer. According to the page Remote Scientific Sensors on the same site:

Dolginov designed several types of magnetometers for spacecrafts, including proton precession detectors and variometers. But the most common sensor was the fluxgate magnetometer, which measures a component of the vector field strength in one direction. It is composed of two alternating-current transformers connected in opposite polarity, yielding zero net current. But if an external field is present, nonlinear saturation effects in the iron cores create an imbalance and current is produced. Three perpendicular fluxgates form a triaxial magnetometer, which measures the three-dimensional magnetic vector field.

Dolginov's Magnetometers on Luna-1 to Luna-3 discovered that the Moon has almost no field. Luna-2 data suggested a field of less than 50 nT (its dipole field is today known to be zero). Sputnik-3 had the first spacecraft magnetometer, but it was used primarily to measure the satellite's orientation. His devices were included on virtually all Soviet spacecrafts, including Sputnik-3, Luna-1,2,10, Venera-1,2,3, Zond-3, Mars-1 and later missions. Kosmos-26 and 49 were used to make detailed maps of the Earth's field.

The first planetary probe, Venera-1, had a triaxial fluxgate magnetometer, to measure the field of Venus (if contact had not been lost). It also had two parallel magnetic variometers to measure the magnitude of the faint interplanetary field. Readings from Venera-1 at a distance of 1.9 million km, and from Mars-1 at far greater distances indicated interplanetary fields of 3 to 4 nT. Dolginov's results from the Mars-3 orbiter suggested a weak Martian magnetic field, but recent measurements suggest it is from solar wind, not the planet's core.

Question: How were the Venera variometers able to measure extremely weak, nano-Tesla magnetic fields? Is it actually a specific kind of flux-gate magnetometer or use a different operating principle? Does the diagram show two variometers, or does the pair together comprise a single device? 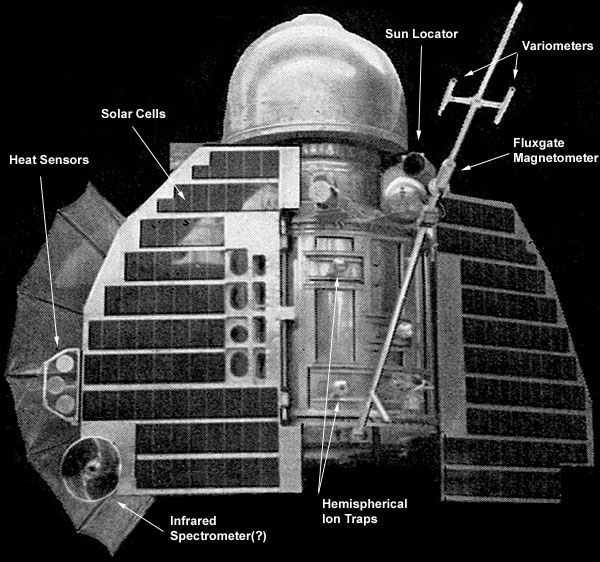 Described as a "flux-gate magnetometer".

In book "Means of measurement of magnetic field parameters":

Venus, Mars and other planets. With the help of these devices, the basic laws of the interaction of the solar wind with the Earth’s magnetosphere were established, as well as regularities that allow judging the mechanism of the appearance of the planets own magnetic fields. Three-component magnetometers have been used and continue to be used to control the orientation of artificial Earth satellites. It must be emphasized that it is precisely the requirements for space magnetometers that put on the agenda the issues of increasing the sensitivity of flux-probes and reducing the level of their own noise.

Not the answer you're looking for? Browse other questions tagged interplanetary magnetic-field measurement instrument venera or ask your own question.

3
The first transistors in space: Germanium or Silicon? What about in orbit?