Why does this “Midas missile early warning satellite” have a tilting cone with such a complex black-and-white checkerboard pattern?

Clicking on images of historic satellites led me to the airvectors.net page Foundations Of Automated Space Technology which includes this image and passage:

A number of Samos satellites were also flown in 1960 and 1961. Most were film-readout satellites, though a few were Zenit-style film-and-camera-return spacecraft. Details were never revealed, and the program remains somewhat mysterious; in fact, the Zenit-style film-and-camera-return spacecraft appear to have been partly developed, under Bernard Schriever's direction, as a means of giving the Air Force an option of flying an astronaut if the service had so desired, in much the same way that Zenit operated as a "cover" for Vostok. If so, that aspect of the program was conducted with extreme discretion.

It appears Samos was very unsuccessful, though it was played up in the press as America's official space reconnaissance program to distract attention from Corona. Some authors have suggested that it the main reason Samos remains classified after all this time is that nobody involved wanted to remember it, much less say anything about it.

The first Midas missile early warning satellite was launched on 26 February 1960 but failed to achieve orbit, and although Midas II was successfully launched on 24 May 1960, its telemetry system failed two days after launch. Midas III was finally successfully launched in 12 July 1961. A total of 12 Midas satellites were launched into 1966, but it appears that this program wasn't very successful either, with infrared sensors that picked up glints of sunlight off clouds as missile launches. Details are unclear, since specifics of the Midas program were also never revealed. In any case, the military used the experience to consider better solutions. 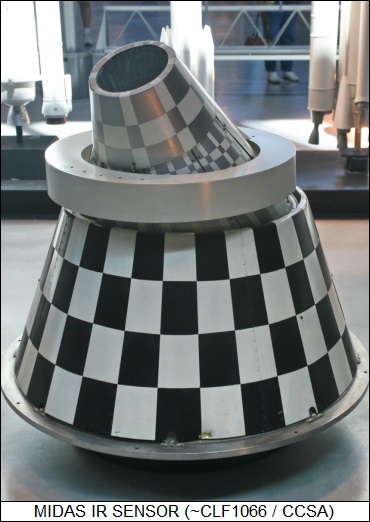 Question: Why does this "Midas missile early warning satellite" have a tilting cone with a complex black-and-white checkerboard pattern? While this question covers checkerboard patterns on launch vehicles, presumably these are too small to have been seen from Earth in the 1960's.

Browse other questions tagged identify-this-object military united-states space-surveillance or ask your own question.

5
Why were Europe's first few satellites so stylish? Why the pronounced alternating white and black stripes?
3
Why do some launch vehicle stages have checkerboard patterns?

8
Why was Redstone Arsenal specifically chosen for post-war rocket development?