Where in orbit was Michael Collins when the LM landed?

In the NPR podcast On Apollo 11 Anniversary, A Former Crew Member Reflects On The Lunar Trip Scott Simon interviews Michael Collins. Near the beginning is this exchange:

SIMON: We asked the man who helped get there what people of a certain age are asked all the time: “Where were you when man landed on the Moon?

Question: Where in orbit was Michael Collins when the LM landed? Can this be estimated from available data about and understanding of the CM orbit and historical timestamps?

I estimate that Collins, in the CSM, was over about 16.7º E longitude when Eagle touched down, about 200 km ground-track West of the LM.

I got approximate loss-of-signal and acquisition-of-signal times for the last couple of revs before landing from the Apollo 11 annotated journals. The CSM was in an orbit that took about 119 minutes per revolution; for about 46 minutes of each rev it was behind the moon and out of contact, leaving 73 minutes to pass the front of the moon. 0 longitude is the point directly facing Earth, so it's about 36.5 minutes from AOS to 0º.

The AOS and LOS times are mostly round-minute estimates, and I am implicitly assuming a perfectly circular orbit and a ground station at the closest Earthside point to the moon, and ignoring the 1.25º orbital inclination, so I'm sure I'm off by a few degrees one way or the other (at 30km of lunar circumference per degree), but almost certainly Columbia was somewhere in Eagle's visible sky at touchdown. Let's say, somewhere within the red dot in this image: 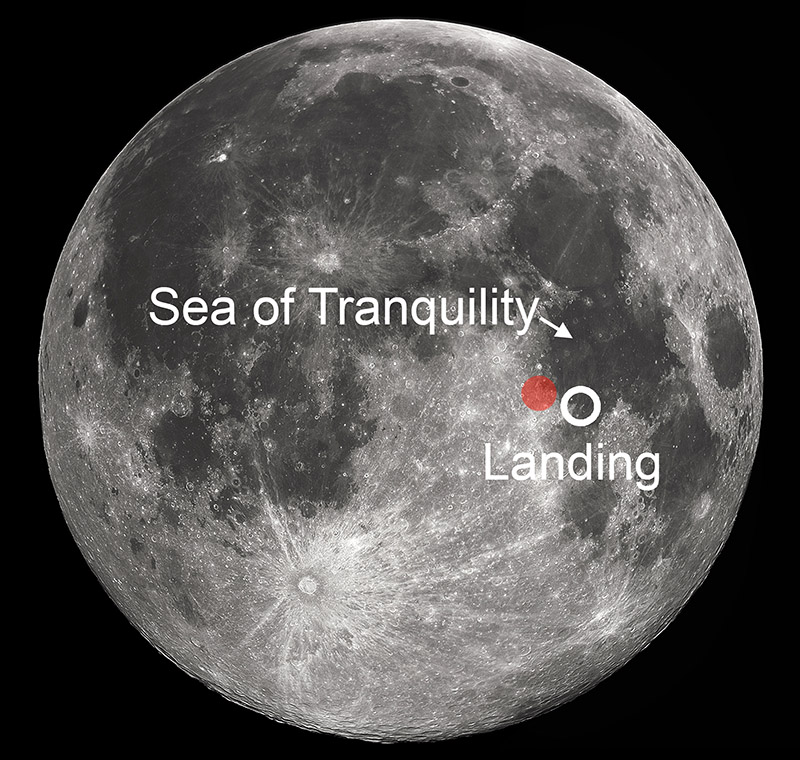 My initial estimation technique was very crude: I assumed that the horizontal speed of the LM went linearly down from 1600 m/s to zero over the 13 minutes of powered descent, which would make it cover 624 km less distance than the CSM over that period. (The horizontal deceleration obviously isn't linear, because the engine throttles up and down, and the thrust angle changes, but the area under the curve has to be somewhere between 0 and 1248 km, and closer to the middle of the road than not.) However, when PDI starts, the LM is already ahead of the CSM, having gone into a lower, faster orbit during the blackout period, so some of that ~624km loss is canceled by the LM's head start.

Not the answer you're looking for? Browse other questions tagged apollo-program orbit history apollo-11 or ask your own question.

11
How long did it take for the Apollo Command Module to orbit the moon?

46
Why did Apollo 11 need someone to stay behind in lunar orbit?
3
Was an elliptical orbit considered for the CSM when planning the Apollo moon landing missions?
16
Did Michael Collins ask for a fourth gimbal for Christmas? Is there a recording or transcript?
19
How far have astronauts been in space?
12
When did Houston figure out where the Eagle had landed?
5
How soon after “The Eagle” landed did they first attempt to bounce a laser off the Moon? When did it first succeed?
4
Where are these historical IBM + Apollo related locations within NASA? What do these computers do?
10
How did Conrad let Bean drive Apollo 12? Did anyone get in trouble?
8
Did Apollo astronauts play on the Moon their pre-recorded music?
12
What are the “18 rescue missions” on Apollo 11, and which 10 of them did Michael Collins not feel comfortable with?