If something "falls off" the L2 or L1 point, where will it go?

The L1 and L2 points are thought to be unstable "saddle" points, meaning that there is stability in two directions of movement, but not in the other. That raises an obvious question - when a spacecraft stationed there diverges toward either side of the saddle, and station-keeping is no longer maintained, where will it go?

There are several projects planned for these points. The JWST won't be at the Sun-Earth L2 point forever. Likewise, we're looking at a plan for moving an asteroid to the Earth-Moon L2 point, and a lot of people raise questions about what would happen if it goes astray (although I'm not worried). Unless we keep sending supply missions in perpetuity, it will drift away eventually.

I'm most interested in the Earth-Moon system. We have 2 points, and 2 directions it can fly off into. Does that result in 4 distinct, deterministic, trajectories? Which of these would crash into the moon and the Earth? Would it happen with one orbit? Or would any of them be chaotic?

Thanks to a very helpful suggestion in the comment, I was able to do an initial test with an online orbital simulator. It can be found here:

This starts off (helpfully) with the Earth moon parameters, for the mass ratio and the spacing. All we need to do is tell it where to put the initial particle. Here is the screen where you can do that: 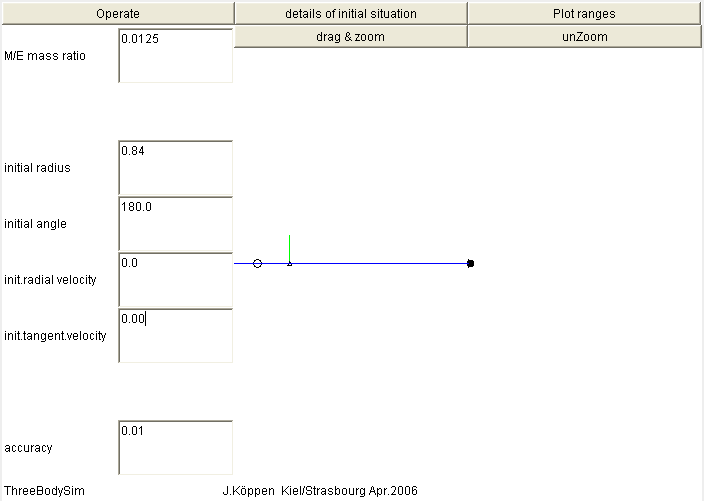 This is "details of initial situation". As a side note, I believe they marked both the system CM and Earth, but they partially obscure each other.

You can see that I've changed the parameters to what we need for simulation starting at L1. It is around 84% of the way from Earth to the moon. Make sure the angle is set correctly too. Then we have two parameters for initial velocity - set both to zero because we are in the co-rotating reference frame.

Here's what I get doing the simulation: 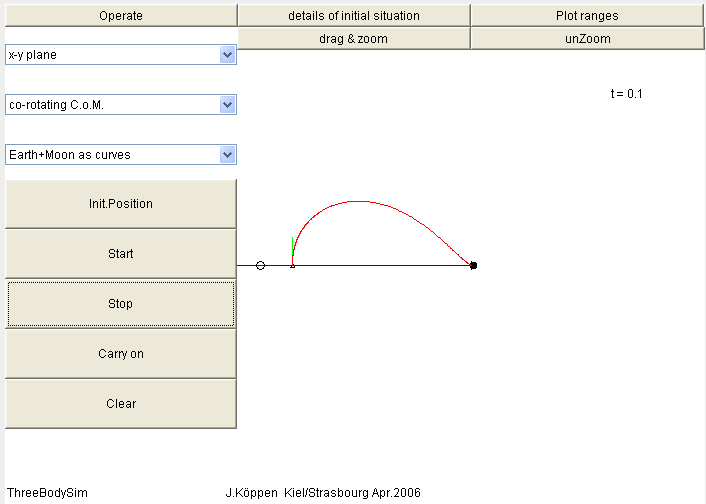 You can see that it initially moves tangentially to the Earth-moon line, and then crashes into Earth.

I can't tell if this is the answer I'm looking for. Simplistically, I don't see how it can move in that direction. Given the shape of the saddle point, I believe it should move either to the right or the left in the above plot. But the mechanics in the co-rotating frame are notoriously spooky. It still seems possible that this is right, but I can't tell.

The problem was that I misunderstood what the input parameters were. The initial tangential velocity is still given in reference to a non-rotating frame. In order to be "stationary" relative to the Earth-moon system, this parameter needs to be equal to the radius parameter. See help:

init.radial velocity with respect to the Centre of Mass, given in units of the oribital speed of the Moon

init.tangent.velocity ditto, positive velocities point in the same sense as the lunar motion

So in the above L1 example, it the initial tangential velocity needs to be 0.84. If you do that, you can get this: 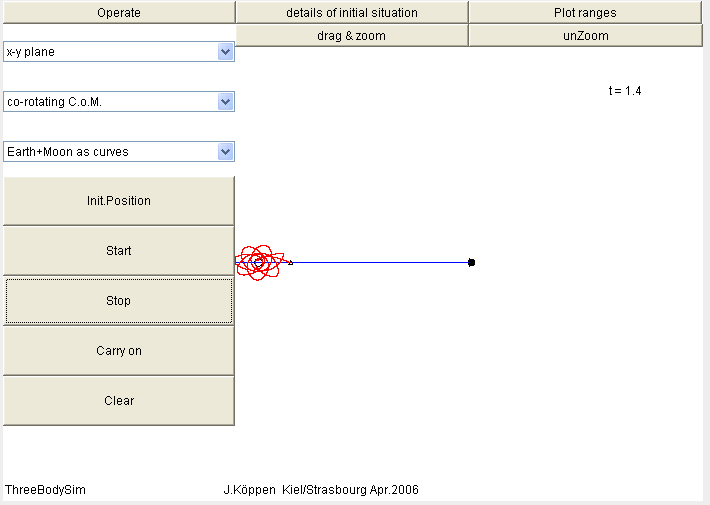 This is much more reasonable, and more likely correct. In this example, it does crash into the moon, but only after about a month. The scenarios appear to fit:

...when a spacecraft stationed there diverges toward either side of the saddle, and station-keeping is no longer maintained, where will it go?

The Earth-Sun $L_{1}$ point is unstable, just like the rest of the Lagrange points. If a spacecraft degrades from a quasi-stable orbit at $L_{1}$, it will most likely just orbit the sun in a heliocentric orbit. This happened with the ISEE 3 (or ICE) spacecraft which was sent after Comet Giacobini-Zinner in 1985.

ISEE 3 orbited the sun for ~30 years and eventually came back around to Earth in 2014. Remember, the Earth-Sun $L_{1}$ is centered at something like ~230 $R_{E}$ away from Earth. If a spacecraft "falls out" of orbit there, it will just keep moving along in its normal tangential motion around the sun. Note that the ISEE 3 spacecraft was sent into an $L_{2}$ transfer orbit prior to leaving Earth for Comet GZ.

The JWST won't be at the Sun-Earth L2 point forever...

No, it will not. I do not recall if there are plans to degrade the orbit and crash the spacecraf to avoid debris build-up. However, if we assume JWST were to lose communication with the ground and go into safe-mode, its orbit would degrade. It, like ISEE 3, would most likely enter into a heliocentric orbit as well, but it would lag the Earth, instead of lead it like ISEE 3.

I seem to recall that there are spacecraft debris that are being tracked that are in some of the Earth-Moon Lagrangian points.

There is a consensus that there are small asteroids and dust clouds in the Earth-Sun $L_{4}$ and $L_{5}$ points. These are called trojans. The Earth has a relatively large trojan that was found in 2010 by the WISE spacecraft. We have known about the Jovian trojans since the early 1900's.

Which of these would crash into the moon and the Earth?

This actually depends upon the phase and speed of the orbiting object when its orbit finally degrades. I am not so sure that one can definitively show, for instance, that the Earth-Moon $L_{1}$ orbit will always result in the object crashing into the Earth or the Moon.

Generally, a spacecraft inserted into a Lagrangian point orbits in an elliptical pattern in one plane (i.e., the plane of the two bodies creating the Lagrange points), and the third component of the orbit is decoupled, called a Lissajous orbit. The amplitude of the out-of-plane component matters here as well, because if too large the orbit will degrade in a completely different manner than if the in-plane amplitudes become too large.

In short, the system is very complicated.

Not the answer you're looking for? Browse other questions tagged orbital-mechanics trajectory lagrangian-points planning or ask your own question.

30
Is there a lot of space trash at the Earth-Moon Lagrange points?
7
Where will objects end up, after losing stability at Lagrangian points?
6
Minimum Delta V to a staging area in cislunar space for a vertical space gun

19
How deep is the force well of L4 and L5 Lagrangian Points of Earth-Sun set?
36
Why should the James Webb Space telescope stay in the unstable L2?
12
Low Energy Transfer within Earth-Moon system
1
Did ISEE-3 spend a few years in a halo orbit around sun-earth $L_1$ without using any fuel?
17
What happens to JWST after it runs out of propellant?
3
Are there some three-body orbits that can't be escaped? Can we know without propagating forever?
4
Station-keeping delta-v per year for an Earth-Moon vanilla halo orbit?