What orbit would a space station need to stay in orbit for N years?

(posted before on physics stackexchange but was told to come here)

I'm reading this book which has a post-apocalyptic setting. At one point you look at the earth from the view of a 1000-year-old space station with a bunch of frozen astronauts on board. It was an interesting scene, but got me thinking -- doesn't the ISS have to perform orbit corrections semi-regularly (every couple months), just to avoid crashing back down to Earth?

So, how far away would you need to put a space station so it stays in orbit for 1000 years? Imaginary bonus points for $N$ years. Assume no fuel is left on board for orbit corrections.

tl;dr: Park your ISS-like space station above 700 km and there is a good chance it will only lose 100 m/s in 1,000 years due to atmospheric drag at least (and 2000 km for a million years). However, there are other problems

This is a really interesting question! Just for example, the LAGEOS satellites are about 6,000 km above the Earth's surface and are expected to re-enter the atmosphere in 8 million years or so. But they are spherical and dense, whereas a space station may be non-aerodynamically shaped and have a low density.

Let's look at the current TLE for the ISS from https://www.celestrak.com/NORAD/elements/stations.txt

Wikipedia's BSTAR gives the following equation for acceleration due to drag:

Calculating time to reentry requires some calculus, so let's just estimate the time it takes to lose 100 m/s in velocity.

Putting that back into the first equation and using the ISS' $B^*$, we get

What altitude is that? It depends greatly on the Sun's activity. The plot below puts it as low as 380 km during a solar minimum, but up at 700 km during an active Sun. 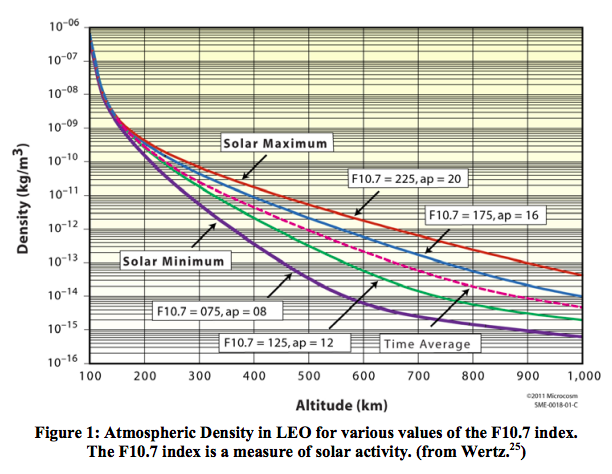 First, let's ask ourselves "why do orbits decay?". For multiple reasons.

Satellites in geostationary orbit can stay in orbit for billions of years, such as the EchoStar XVI which orbits around 35000 km above Earth. Safe from the atmosphere, far enough to not decay from solar flares, and relatively close to the Earth to avoid solar gravity overtaking the satellite and decaying the orbit. Obviously these satellites won't be functional, but they'll still be there, like the space station you mentioned in your question.

So the answer to your question is: In order for a satellite to stay in orbit for at least 1000 years, it needs to be in a geostationary orbit.

Not the answer you're looking for? Browse other questions tagged orbital-mechanics space-station station-keeping or ask your own question.

46
How often does ISS require re-boosting to higher orbit?
6
What is the density of the earth's atmosphere at an altitude of four hundred kilometers?
9
What is the ISS maximum altitude?
6
How much of a drag is it, orbiting the Earth in a space suit?
1
Atmospheric drag effect