Are rockets faster than airplanes?

Rockets are fast. Faster than anything else somebody could fly with - at least intuitively to me.

But - airplanes are fast too.

And going up is much harder than just going forward. A rocket is certainly faster than other ways going up - that does not mean it is fast when compared to something different, a plane in horizontal flight.

Of course, a rocket can end up faster than a jet outside the atmosphere.

But when I think of a rocket that is still in the atmosphere, or one I can still see from the ground: Is that really "faster than an airplane"?

Rockets are much faster than airplanes for most of their flight.

Here's a graph of a Space Shuttle launch: 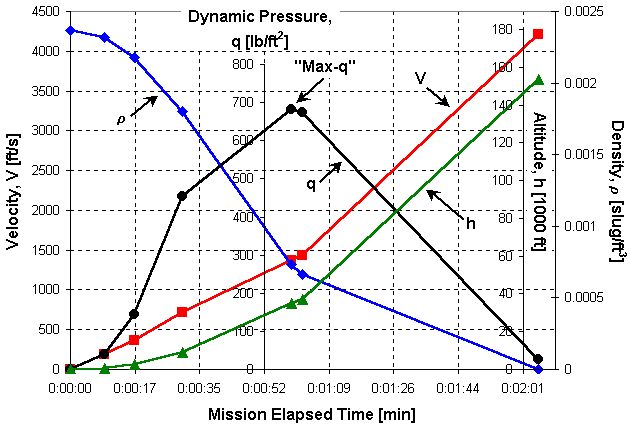 The final speed needed to get into orbit is about 8 km/s or Mach 25.

It doesn't look fast because at the same time, it quickly gains altitude. This makes its speed difficult to judge from the ground.

A rocket isn't automatically fast - a small firework rocket may be no faster than a car. The important point is that rockets carry their own oxidiser and aren't limited by the need to interact with the air.

Most aircraft engines need to develop lots of thrust at low speed for take off, and they have propellers or large fans that cause drag at high speeds, limiting them to sub-sonic speeds. Even a pure turbo jet engines has a compressor to suck in air at low speed, which causes drag that limits them to about Mach 2 or 3.

A ram jet doesn't have these limits, how ever it has to slow down air as it enters the engine to give it time to mix with the fuel and burn. This limits them to about Mach 7. (There is research into super-sonic-combustion-ramjets (SCRAM jets) that could theoretically go faster but so far only a handful of development flights.)

A rocket doesn't have that limit, it will keep accelerating until it runs out of fuel (which typically doesn't take long, as they're really inefficient compared to air-breathing engines).

Rockets don't actually mostly go up, they try quite hard to go up as little as possible.

While flying, gravity is always accelerating you downwards at 9.8 m/s^2. This means that any fuel spent accelerating upwards is wasted, as gravity will pull you back to earth eternally, no matter how much fuel you burn (unless you reach escape velocity, but it will still slow you down substantially by the time you've escaped). This is not the case with horizontal velocity, which is completely unimpeded in a vacuum, since the only force acting on your vessel is a central force towards the center of the earth, perpendicular to the tangential direction.

An orbital launch vehicle's primary goal is to reach orbit, which requires a horizontal velocity high enough that the earth's curvature falls away from you at the same rate you're falling towards the earth. This velocity is around 7.5 km/s in low earth orbit, many times faster than even the fastest aircraft ever built.

Unfortunately the atmosphere gets in the way of maintaining such velocities close to the ground, so rockets do have to waste a bit of fuel in order to climb above it, but the vast majority of their fuel is spent accelerating sideways. You'll notice that upon launch, rockets almost immediately tip over slightly, and slowly turn towards the horizon as they loft their trajectory above the atmosphere and no longer require as much thrust to prevent gravity from halting their upwards velocity and pulling them back downwards.

That depends entirely on what rocket and airplane you are comparing, of course.

However, with regard specifically to the large rockets used for spaceflight against commercial aviation, yes. Orbital speed is approximately 8 km/s for Earth at a low orbit. A typical commercial jetliner flies at speeds of around 0.25 km/s. That's all it takes to know which is "faster".

How fast things "appear" to be moving, however, is a rather different matter, and a huge function of observer perspective. "Apparent" motion is really the crossing of your visual field at a given rate, and this can be seen by noting that it is not measured in units of physical speed (m/s, km/s, km/h, MPH, etc.) but in units of angle per time, e.g. rad/s, mrad/s, deg/s. This depends on all of:

. Note that as the distance is changing, so too will the apparent speed through the course of the flight: think about a car going by you - its apparent speed is fastest at closest approach when it passes your perpendicular to the roadway, and then slows as it recedes.

The relevant expression can be derived from trigonometry: it is

where $\theta$ is the angle in the third bulletpoint. Note that the visual speed is, as just mentioned, maximized when moving perpendicular to your line of sight, i.e. $\theta = 90^{\circ}$ or $\frac{\tau}{4}\ \mathrm{rad}$.

So an airplane at a distance of 10 km above your head, looking straight up and traveling at 0.25 km/s horizontally, has an angular speed of 0.025 rad/s or 25 mrad/s. A rocket which is maybe about 50 km up and going 2 km/s, say, would have an angular speed of 40 mrad/s if it were traveling similarly transversally, but if the angle to your vision is, say, 250 mrad (approx. $14^{\circ}$) as may be expected from an upward trajectory, then it will only have an apparent speed of 10 mrad/s, less than half as much. This is why a rocket appears slower, as you observe, during the launch phase.

Not the answer you're looking for? Browse other questions tagged rockets atmosphere atmospheric-drag velocity or ask your own question.

18
Why are rockets cylindrical?
5
Shapes of rockets on the Earth with no atmosphere
1
How does a rocket in space go faster than its own rocket engine gas velocity?
3
Do some solid rockets burn faster at the bottom? What's an extreme case?
4
At what point when travelling faster and faster around the earth are you not gonna be falling back again (7km/s? 8km/s?)
7
What are the causes of these episodes of faster than average altitude loss by the ISS?
0
Could Breakthrough Starshot proposed propulsion system be used in a regular size probe to accelerate it faster than any probe has been before?