Were the Apollo broadcasts recorded locally on the LM?

I've previously asked about how the recordings from the Apollo missions were originally recorded, and then transcribed; but I forgot about the video as well! It's well known that for some of the Apollo missions, when things didn't go awry, that video of the Lunar EVA's were broadcast live. However, when you think about it, it seems highly unlikely that NASA didn't have a back-up plan for the lunar footage.

For Apollo 16 and 17 there were problems with the Antennas which prevented the recording of the first steps on the moon from being transmitted for these missions. Does that footage exist on "tapes" brought back from the moon or something analogous? Or was the live stream being backed up at mission control and when the antenna went down, did all hope of getting that footage go with it? What was their backup plan?

My question is: Was the live stream back to Earth the only stream of data being recorded and the only life-line for the sending of visual images back to Earth? Was there any of the following:

I don't know what data-compression looked like during these missions, but it wouldn't shock me if no local recordings were taken. The reels for the sound recordings alone were huge, I can't imagine what an AV reel looked like back then.

The live broadcasts from the Moon were not recorded on the LEM/CM. Video tape recorders were too large at the time to make this practical. They usually came in the shape of an open-reel tape recorder with 2" wide tape. 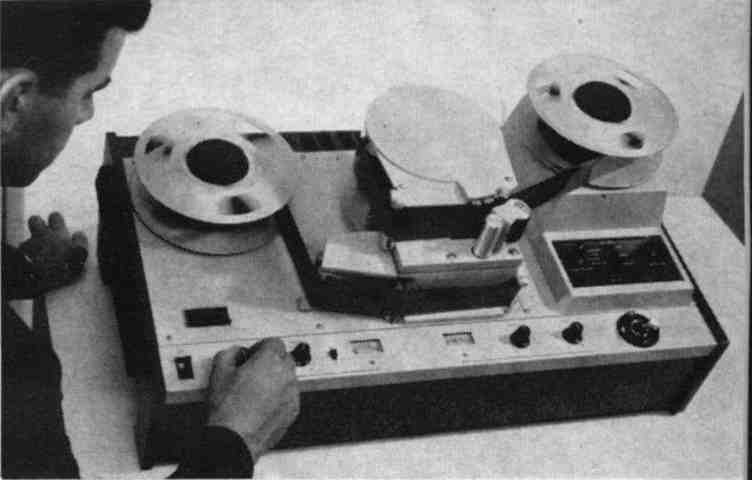 The first video cassette recorder came on the market in 1971.

The astronauts did bring photo and film cameras, these images could not be transmitted live so they had to be brought back in the spacecraft.

Hobbes' answer is correct, but here is some supplemental information.

The Erectable S-Band Antenna was a parabolic dish that was folded and stowed in the descent stage. Page 4-86 of the Apollo Program Summary Report describes the diameter as 10 feet and this NASA webpage says 3 meters. It was carried on Apollo 11-14. Although the LM could broadcast with its own S-Band antenna, it was believed the Erectable Antenna would be better for TV broadcasts. On Apollo 11, the smaller S-Band antenna mounted on the LM was deemed satisfactory and time was short, so they skipped erecting the 10-foot antenna. Apollo 13 didn't get to land or deploy the antenna. But the antenna was deployed on Apollo 12 and 14.

After egress, the astronauts set up this antenna on a tripod on the lunar surface. The TV camera and the 10-foot antenna were both connected to the Lunar Communications Relay Unit, which was kept in a drawer on the descent stage. The block diagrams of the LCRU do not show any recording mechanism.

During Apollo 15-17, the TV camera, LCRU, and a smaller replacement for the dish antenna were taken along on the lunar rover. TV broadcasts were sent directly to Earth. Carrying a video recorder would mean less weight available on the rover for tools and samples.

The command module actually had a TV monitor so the astronauts could see what their TV camera was recording. During some of the later flights, the CM TV camera could be attached to a boom which was in turn attached to the open hatch; I think that's why the monitor was needed. This monitor malfunctioned during Apollo 16, as documented in section 14.3.1 of its mission report.

Anyway, in an alternate reality, one could use a film camera to record what was on the CM TV monitor. That would preserve the TV images even if their broadcast failed. But that wasn't actually done. Nor would this have helped on the lunar surface, which had no TV monitor.

Not the answer you're looking for? Browse other questions tagged apollo-program data-transmission video apollo-16 apollo-17 or ask your own question.

21
How were the Flight Journals of the Apollo missions originally transcribed/recorded?
8
Why is there no video of the first steps of Apollo 16 and 17?
3
What kind of camera was used to produce this Apollo-era footage of the Earth?

26
How was dust-mitigation addressed during the Apollo program?
9
How much extraneous mass did each of the Apollo missions carry?
3
Why was Apollo 17 considered to have “achieved a very successful geological survey”?
4
Who was the first person in space to “be on TV”?
6
What sounds did the Apollo astronauts hear during launch
4
Why did Mercury use multiple CAPCOMs while Apollo did not?
8
Did Apollo astronauts play on the Moon their pre-recorded music?
8
Apollo Mission Insignia patches, were they stitched by hand or numeric control?
19
Were any Apollo-13-specific procedures added to standard training?
7
What was the nature of the communication problems during Apollo 11's Eagle's descent? How were other antennas selected?