Have the micronewton thrusters developed for the LISA mission been flight tested yet?

JPL together with Goddard and a private company called Busek Company Inc. developed a new type of propulsion system known as micronewton thrusters for the LISA mission (which has since had a name change and a rescoping). The goal of these small thrusters is to maintain the position of a spacecraft from small external disturbances such as solar winds and radiation pressure. They were to be used on the LISA mission to have the spacecraft precisely follow the freely floating, mirrored, test masses inside of the spacecraft, the positions of which were to be measured by interferometry. My questions are:

Each DRS colloidal thruster consists of a set of emitters and electrodes that generate thrust by ejecting and electrostatically accelerating nanometer-sized, positively charged propellant droplets (colloids) (Fig. 6). The emitters are held at a positive variable voltage by a beam voltage source typically operating at 6kV. The extractor electrode located near the emitters is supplied by a variable voltage, nominally ranging between 1.5kV to 2.5kV below the emitter voltage. The extractor electrode asserts an electrostatic force on the fluid to form the so-called Taylor cone at the tip of each emitter. The cone tip transits into a cylindrical jet, some tens of nanometers in diameter, which ultimately breaks into a fine spray.

After passing through the extractor, the spray is further accelerated as it flows through an accelerator electrode, which is held at a lower potential than the extractor electrode and negative with respect to the neutralizer cathode to prevent neutralizer electrons from flowing back into the thruster. 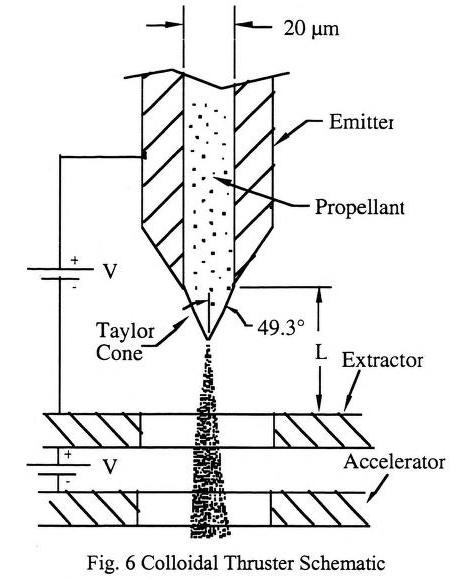 The Colloid MicroNewton Thrusters, along with new Gravitational Reference Sensors, are being flight tested on this mission. I have not run across a mention of their expected lifetime.

Not the answer you're looking for? Browse other questions tagged propulsion spacecraft engine-design engines or ask your own question.

10
Why have no reusable launch technologies been developed?
4
Have spaceships been tested to withstand bullets?
16
How far have autophage rockets been developed?
2
What could be the proprietary propellant blend that "Apollo Fusion" claims to have developed for it's hall effect thrusters?
4
Have all of InSight's engines/thrusters been permanently disabled now that it has landed?
11
Have there been rocket engines designed for diesel? What ISP theoretically possible?
2
Has Demonstrator-1 2021-006BX demonstrated a hydrogen-oxygen combustion engine fueled by electrolysis yet?
3
What makes CAPSTONE-1's eight hydrazine thrusters so "super small, high-performance"? How do they work without any tank pressurization?