Where are these historical IBM + Apollo related locations within NASA? What do these computers do?

In the Fortune Magazine video IBM's Moonshot: Past and Future with the notes

We at IBM are very proud of our history with the space program. all the way from the early days of working with the Department of Defense and some of the first satellites that were put into space, through the Mercury Gemini programs, and of course into the Apollo program, culmination in putting a man on the Moon.

IBM, through the course of the Apollo program had over 4,000 IBMers working on that program, developing the computer systems, writing the software present in the control centers. We were responsible for writing the control programs for the rocket telemetry and trajectory; we were responsible for the computing and sensing of the behavior of the rockets and the capsule as it was launched, and as it was guided into orbit and then out of orbit, and then sensing the capsule information and bringing it back in making course corrections as we went through.

There are several shots of different locations and equipment during the Apollo missions. I've included four screen shots below.

Question: Where are these historical IBM + Apollo related locations within NASA and what do each of these computers (or consoles) do?

For one of them the answer is likely to be found in this answer but I've included the screenshot for completeness.

Note the IBM shirt logos in three of them: What do these three historical IBM staff at NASA insignias designate?

Click each of the images to display full size: 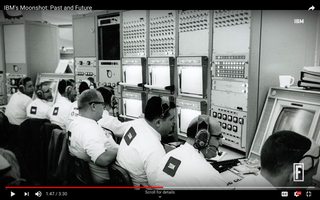 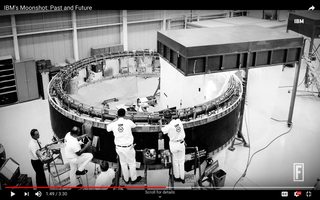 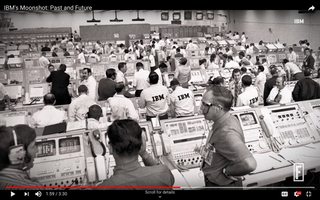 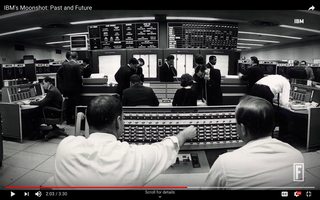 cued at 01:20 (caution, there is very loud cheering 1 second earlier)

First three pictures - What do these (IBM) computers do: See the linked answer about the Instrument Unit.

Last picture - What do these (IBM) computers do: Command and control the Manned Space Flight Network communication systems.

14
Were the consoles in mission control computers or terminals for displaying information?
11
Is this really the Saturn V computer only, or are there other systems here as well?
2
What do these three historical IBM staff at NASA insignias designate?

2
What are these giant NASA boxes?
7
Which Apollo-era contractors are still building aerospace components today?
9
Apollo Mission Operations Control Room 2 display, what do these numbers indicate?
4
What exactly are Tindallgrams? (spaceflight related)
5
Help understanding this Apollo 11 docking probe image, what are we looking at, and from where?
27
If I wanted to reconstruct an entire Apollo mission's crewed spacecraft trajectories, what are the key sources of historical data I'd look for?
9
Are there any close-up photos of the screens used in the MOCR2 from the Apollo era where text features can be distinguished?
9
Did the RTCC ever “fail over” to the standby computer during a mission?
0
What would have happened if all Apollo computers failed?