How were the LM astronauts supported during the moon landing and ascent? What were the max G's on them during these phases?

I understand that the LM astronauts descent trajectory had them flying feet first in a standing position during the descent to the lunar surface and again on ascent. But it seems there must have been some supplemental support for either their weight or lateral movement during these phases. Were the max G's on them low enough to be able to stand comfortably for the entire time or were there support straps to partially hold their weight. Likewise, were there lateral supports for them in case of lateral accelerations of the LM?

Landing and ascent accelerations were low - 1/3 to 1/2 gee typically.

A restraint system was provided, but really more to hold the crew down to the floor, than to support them. 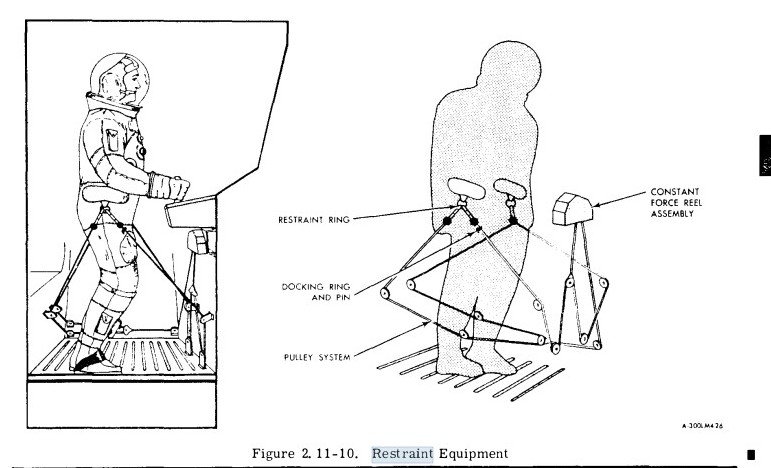 It was comfortable to stand for the entire descent and ascent. Accelerations in the lunar module maxed out at around half a gee; descent took around 13 minutes and ascent around 7 minutes.

According to Apollo By The Numbers, Apollo 11's ascent stage massed 10776 lbs at launch, and 5928 lbs at cutoff, when the ascent engine cut off; the ascent engine fired at a constant 3218 lbs of thrust, so the g-force went from 0.3g at liftoff to 0.54g at cutoff as propellant mass diminished, all quite comfortable for standing.

The descent engine has a rather unusual throttle profile. It was prone to nozzle erosion when fired at throttle ranges between 62% and 92%, so it fired at full throttle for the first 7 minutes or so of the braking burn, until the computer determined that the remainder of the descent could be performed at less than 60% throttle. I think this means the maximum g-force would be attained just before that throttle-down point, and the graphs in this Apollo 15 report seem to be showing about 0.28g at the beginning of the braking phase, peaking at 0.45g at throttle-down. During the last minute or two of descent, the LM would be hovering and changing its vertical speed only slightly, so the g-force would be only slightly different from lunar surface gravity, about 0.17g.

Lateral motion doesn't appear to have been a problem. Aldrin had this to say in the Apollo 11 technical debriefing, regarding the ascent:

A couple of years ago, we had a simulation rigged up that tended to give us the sensations in the cockpit that you were liable to experience during LM ascent. We did this in the DCPS and they rotated us back and forth. Based upon this and many ascent simulations in the simulator, watching the rate needles pop back and forth, and the arrow needles wipe back and forth, I expected quite a roller coaster ride of whipping back and forth. Nothing could have been further from the way it actually turned out. It was a very smooth wallowing type of an ascent with far less excursions. Maybe the total rates were approximately the same, but the physical effort of them was not at all objectionable.

The fixed engine in the ascent stage required bursts from the RCS thrusters to steer. The control logic uses a "deadband" to conserve RCS propellant; this means that if the spacecraft is within a small angle of the correct orientation, the RCS doesn't fire until it drifts off course to a larger angle. This means it tends to rock back and forth from one side of the deadband to the other, which you can see on films of the ascent taken from within the cockpit. Aldrin is saying that this rocking motion was gentler than what had been demonstrated in simulations.

Lateral forces during descent would have been substantially smoother: the RCS would be operating against a much greater mass, and gimbaling of the descent engine would provide course correction in a smoother way.

20
How Did One Stand in The LEM Before Descent?

22
How did the Apollo astronauts train for the 1/6G lunar landing?
13
What were the differences on the LM ascent stage engines on Apollo 9, 10, and 11?
6
How were these NASA engineers able to take men to the moon and bring them back with this limited computing capability?
13
What colors were used in the Apollo Lunar Module interior, and why?
21
How did NASA get the video camera on the Moon to track the LM ascent stage, considering the substantial delay?
7
How much were the LMs maneuvered to their landing points?
2
How fast were the Lunar Command Module and Landing Module traveling around the Moon when they reconnected?
16
Apollo altitude vs rate-of-descent schedule
2
What spacesuits did the Apollo astronauts wear on Earth in their training for the Moon?