How much were the LMs maneuvered to their landing points?

The story of the Apollo 11 landing includes Armstrong having to fly the LM beyond a boulder field at the automatically targeted site. Was this essentially continuing along the same track the LM had followed through its descent, or was there some lateral deviation as well? The LM had six degrees of freedom (3 axes of both rotation and translation, although having only limited forward view, it would not have been wise to fly it "sideways" or "backwards" i.e. blind). What I am interested in is whether Armstrong (or any of the pilots of the subsequent missions) executed any significant "pirouette" or lateral translation maneuvers to locate and fly to their chosen landing sites and/or pirouette to fully inspect a site before touchdown. If not, was it purely unnecessary, was it inadvisable due to stability concerns, inadvisable due to fuel management concerns... ?

The excellent monograph by my former colleague Floyd Bennett has this information on Apollo 11 and 12.

Here are the Apollo 11 and 12 ground tracks showing lateral maneuvering. 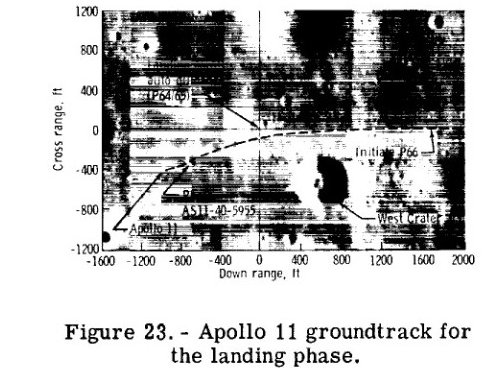 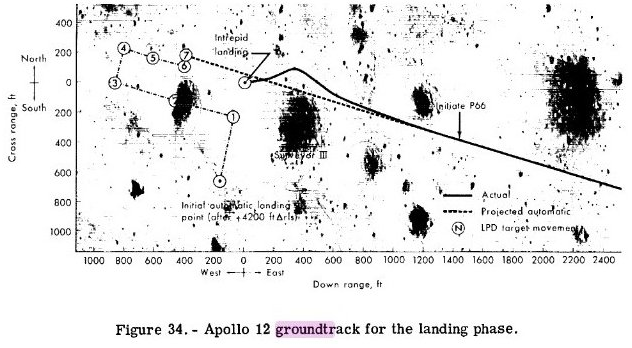 Some debrief remarks by Pete Conrad - the groundtrack looks like he flew around Surveyor Crater, and sure enough:

I saw a suitable landing area between the Surveyor crater and head crater, which now meant I had to maneuver to my left and sort of fly around the side of the crater, which I started to I guess I wheeled it pretty hard, because Al commented a couple of times that I was really cranking her around and I told him it was no problem. I had everything under control and I did increase the rate of descent after he called my attention to the fact that we had leveled off quite high at 500 feet.

From here, emphasis mine 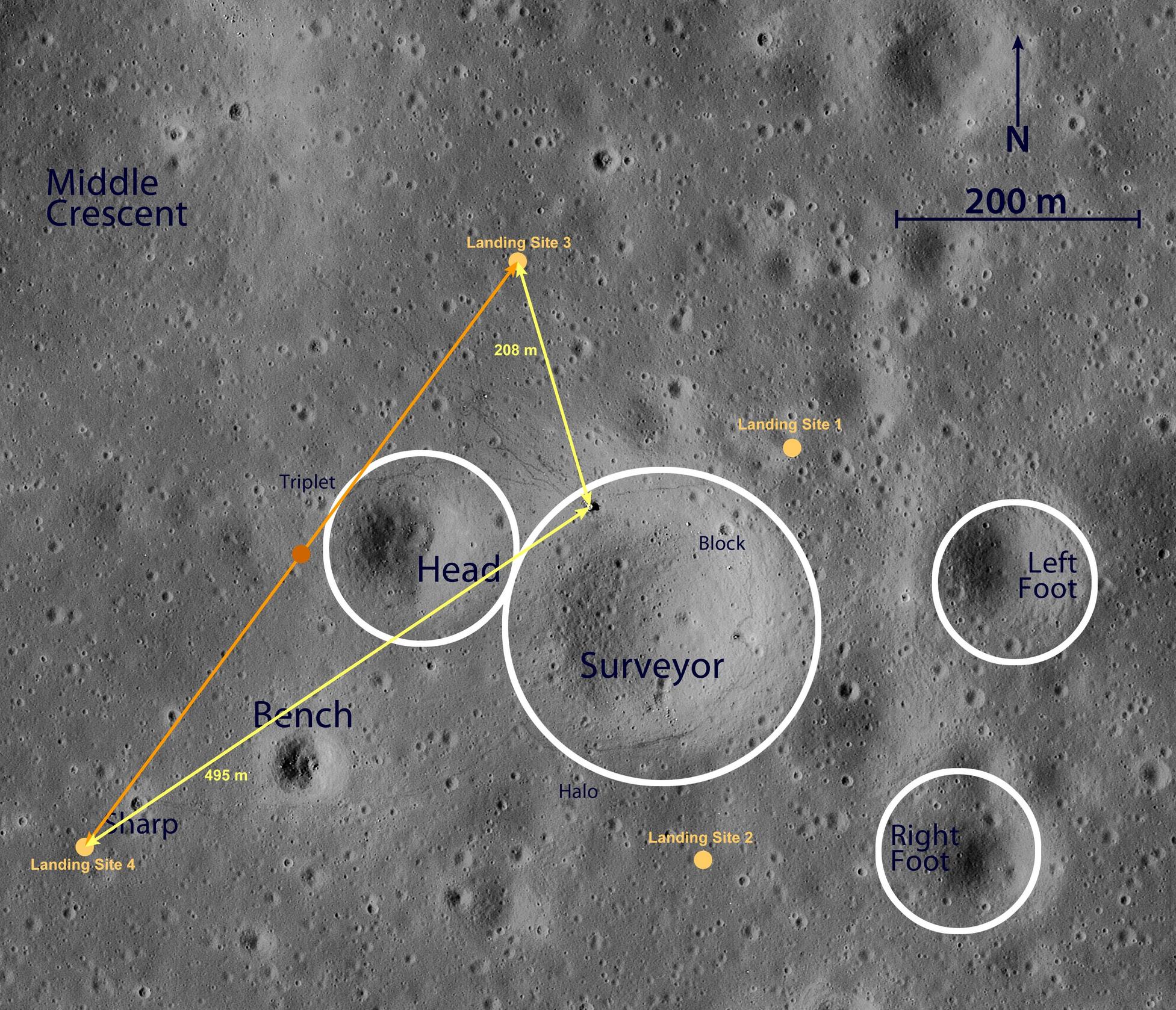 What I am interested in is whether Armstrong (or any of the pilots of the subsequent missions) executed any significant "pirouette" or lateral translation maneuvers to locate and fly to their chosen landing sites and/or pirouette to fully inspect a site before touchdown. If not, was it purely unnecessary, was it inadvisable due to stability concerns, inadvisable due to fuel management concerns... ?

None of the LMs did anything like a "pirouette". There was some lateral maneuvering during the P64 phase, where the commander can alter the computer's projected landing site, and on the final approach (as you can see from Apollo 11's ~400 feet of crossrange during the manual P66 mode in Organic Marble's answer), but in general, they tried to stay moving generally forward. The limits on fuel prevented doing a full survey of an intended landing site, and the lack of any side view made it very unsafe to fly at low altitude with significant lateral or backward velocity.

If the immediately available terrain for landing was unfavorable, it was much safer to "go long", maintain vertical hover and forward velocity, and look for something better.

See Apollo by the Numbers page 35: 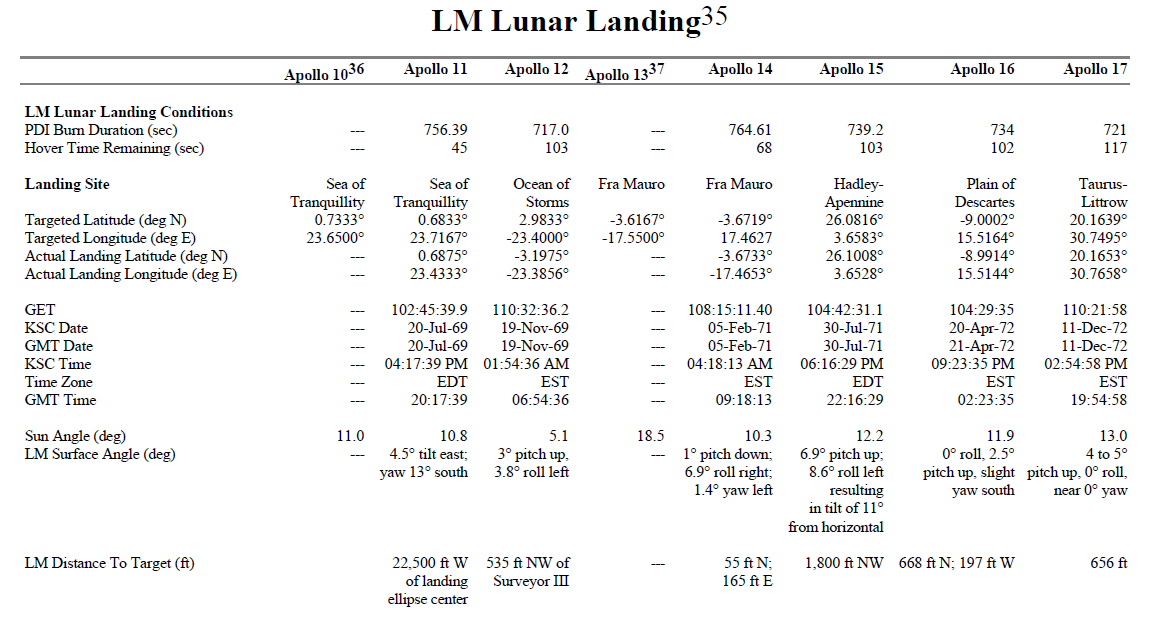 There is no information about the maneuvered distance to avoid obstacles, only the distance between planned and actual landing spot. From the Apollo 11 Summary, link from called2voyage:

The minimum distance was acheived by Apollo 14 with 55 feet north and 165 feet east, using Pythagoras 174 feet.