Why did a phase mismatch between the Apollo 11 LM's RR and AGC generate a large numbers of interrupts?

A critical aspect of the cause of the famous 1202 and 1201 alarms reported by the Apollo Guidance Computer (AGC) during the decent of the Apollo 11 LM is that the rendezvous radar (RR) was using a "reference signal" provided by the LM which was out of sync with the signals coming from the rendezvous radar. I understand the consequences of the many interrupts caused by this situation, and how those interrupts lead to the alarms. But it's unclear to me why this phase difference matters, and why it generated so many interrupts in the first place.

Why did the Apollo 11 LM's RR and AGC being out of phase generate large numbers of interrupts?

This answer is based on the text @organic-marble cited in his now deleted answer and general knowledge about angular resolvers and electronics. 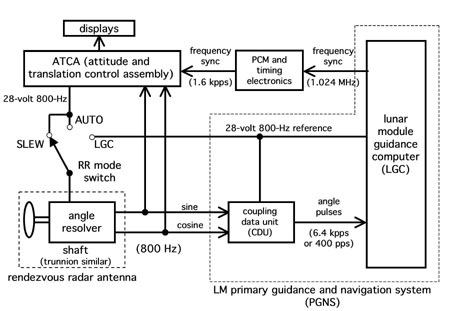 The radar antenna of Apollo 11 was steerable to point it at the target no matter how the orientation of the LM was (within some 10° range at least). Steering happened automatically by tracking the target by its radar echo. For calculations the computer needed to know the direction of the antenna. This was measured by a common device, a so-called angle resolver. Wikipedia provides this schematic image of the device. 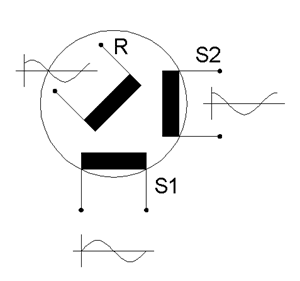 The black bars are three coils, S1 and S2 are fixed and R is rotating with the antenna. Now an electric alternating current (28V, 800 Hz) is applied to R. Like in a transformer this induces a current in the two coils S1 and S2. The strength of this current depends on the angular position of R - if it's aligned with a coil the induced current is high, if it's perpendicular the current is 0.

The task of the coupling data unit (CDU) was to measure these currents, calculate the position and report changes to the main guidance computer (LGC). The important part is the ratio of currents in the two coils, not their absolute value. This is important as we deal with alternating currents that change constantly.

Now there is a slight complication here: The value of an alternating current is 0 1600 times per second (2x 800 Hz), no matter how high the maximum is. If measured close to this point in time, also the ratio of the two voltages can't be determined resulting in bad precision and strongly varying results. These cause the CDU to issue position update commands to the LGC which in turn has to cope with this additional load, causing the known overload error.

Why were the currents measured at the wrong point in time? Because the phase of the voltage used to drive coil R and the phase of the voltage used for timing the measurement of currents were out of sync as this was not a requirement for the design of the power supply. After switching on the systems were not in a defined phase with respect to each other, so by chance the CDU sampled the signals either at a good point (in a large region around 0° or 180° phase) or a bad point (close to 90° or 270°).

As @OrganicMarble points out, this was seen twice during testing but not seen as a major problem. First, the pointing information was still pretty accurate. Sampling the current is not an instantaneous thing, but takes some time during which the current is integrated. Hence, there is always some current to measure, never 0. Second, the increased noise due to measuring tiny currents only tends to average out over many measurements so that the accumulated position changes stored in the computers registers was usable.

Lastly, only two of the three operating modes are affected as can be seen in the schematic shown above. In "LGC" mode the reference signal would have the correct phase - and it looks like this was the intended mode of operation for most of the time and was changed only a month before Apollo 11.

Not the answer you're looking for? Browse other questions tagged history flight-computer apollo-11 or ask your own question.

27
What were the problems on the Apollo 11 lunar module?
13
Did the 1202 error and associated reboot prevent disaster on Apollo 11 landing?

43
How did NASA choose who descended in the LEM during the Apollo missions?
3
Apollo-11 AGC core memory has 5 wires per core (rather than 3 or 4) - why?
157
How did the Apollo computers evaluate transcendental functions like sine, arctangent, log?
13
Why did Neil Armstrong alone, not NASA, end up coming up with the first words uttered on the moon?
4
How many AGC keystrokes did an Apollo rendezvous take?
13
Did the 1202 error and associated reboot prevent disaster on Apollo 11 landing?
28
How did they access the LM to mount the flag package while the Apollo stack was already on the launch pad?
21
Why did Apollo 11 land at the sea of tranquility?
2
What is the constant g-phase in Apollo re-entry, and why does it not show up on the graph?