How "hard" did Apollo 12 turn left just before it landed?

This answer to How much were the LMs maneuvered to their landing points? includes Figure 34 from Floyd Bennett's 1972 Apollo Experience Report - Mission Planning for Lunar Descent and Ascent; NASA TN D-6846

It shows the Apollo 12 LM making what could be loosely termed a "hard left" just before landing.

The Apollo 11 landing has popular fame for "waiting to exhale land" while continuing to move forward, but for this question I'm asking about lateral maneuvers.

Cropped screen shot of Figure 34 from source found in this answer: 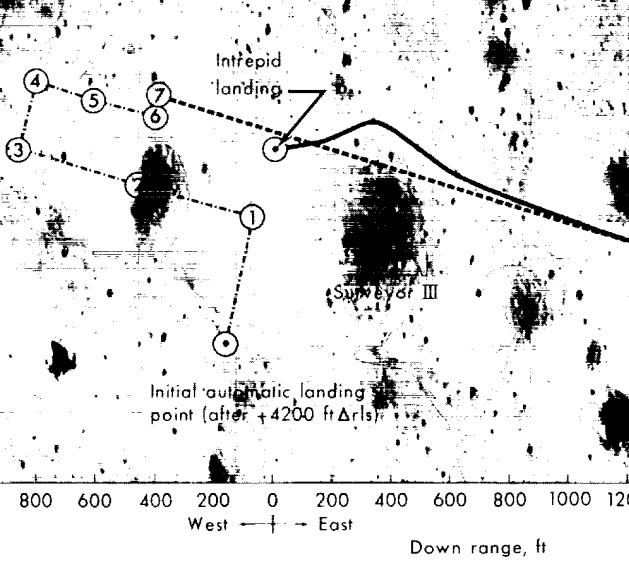 Without any time markings, it's impossible to tell if the ground track indicates a "hard left" or very gentle maneuvers over a long period of time.

The annotated transcript gives us some hints, though:

[Pete is descending very slowly as he flies along the north rim of Surveyor Crater, looking for a good spot to land.]

[Conrad, from the 1969 Technical Debrief - "At that point, Al got a little nervous because I had killed the rate of descent to 3 feet a second at 500 feet. I left a very high pitch angle on it, on the order of 30 degrees, because we were moving quite fast and I wanted to get stopped."]

That is, Conrad tilted the LM backwards 30 degrees, to point the engine forward to brake forward speed.

[Pete has the spacecraft pitched so that the engine is pointed partly forward to slow their approach to the landing site.]

[Conrad, from the 1969 Technical Debrief - "I had the horizontal velocity under control about the time I passed the near (eastern) edge of the Surveyor crater (at about 110:31:00). I saw a suitable landing area between the Surveyor crater and Head Crater, which meant I had to maneuver to my left and sort of fly around the side of the crater, which I started to do. I guess I wheeled her around it pretty hard, because Al commented a couple of times that I was really cranking her around; and I told him it was no problem."]

In the transcript, I only see instance of Bean commenting on the maneuvering, and it’s before this point.

[Conrad, from the 1969 Technical Debrief - "I had everything under control, and I did increase the rate of descent after he called my attention to that fact that we had leveled off quite high, at 500 feet (actually about 200). I got down as soon as I got over the area that I wanted to land on. To me, it looked like a perfectly smooth, good area, between Head Crater and Surveyor Crater, and I started a vertical descent from a relatively high altitude, 300 feet at least. It may turn out that I actually backed up a little bit (that is, move backwards during the descent); but I don't think so." (He didn't.)]

So the horizontal speed was low during the "hard left" on the ground track.

Did the astronauts have full discretion for lateral maneuvers like this? Were there at least guidelines for "how hard" you could turn left or right? (the proper space words escape me)

As with any pilot, the mission commander pretty much had discretion to do whatever he felt he needed to do to safely complete the mission. Between the simulator and the LLRV/LLTV, the crews should have had a good sense of what sort of maneuvers were within the safe envelope.

I don't know of any specific mission rules regarding tilt angle or rate limits.

("bonus points") Would this left-right tilting have been called "roll" in this context?

Thus, to safely make a turn in the LM, you have to combine roll and yaw, which is natural for airplane and helicopter pilots. The roll gets you the sideways velocity, and the yaw keeps your windows facing the direction you're going.

It's also possible to make lateral maneuvers using the RCS without changing pitch or roll, but that's a pair of 100-lbf thrusters against a 20,000 lb ship.

how hard was this turn in reality? Did the astronauts have to hang on to avoid being thrown sideways inside the LEM, or was it quite gentle and/or comparable to vertical acceleration transients at this point?

It's perfectly possible to get to a steep roll angle over several seconds without a high roll rate, so there's no reason they would have been thrown around inside the LM.

Did the LM have to tilt substantially (say 20 or 30 degrees) to vector the thrust laterally?

I don't think they maneuvered quite that drastically; there's full video of the landing available, and while there's definitely some action, I don't think I'm seeing as much as 20 degrees of roll. At 12:45-12:50 I see some significant yaw as well. In the technical debriefing Conrad describes 10 degree excursions in pitch and 10-15 degree yaws, but doesn't speak to roll.

Not the answer you're looking for? Browse other questions tagged apollo-program history lunar-landing attitude-determination-and-control apollo-12 or ask your own question.

7
How much were the LMs maneuvered to their landing points?
1
What was the procedure for Lunar Orbit Rendezvous?

9
What was learned from study of Surveyor-3's components, retrieved and returned to Earth by Apollo-12?
2
Better source for the 1967 photograph of Surveyor-1 by Lunar Orbiter-3?
11
Was there fuel consumption budgeting for Apollo 11 Lunar module?
4
What did the Apollo 12 multispectral Four-Camera system look like?
11
How did Conrad let Bean drive Apollo 12? Did anyone get in trouble?
8
Is there really microfilm on the Moon?
3
Did the Apollo Command module really "skip" within, or off of the atmosphere as a part of its reentry program?
13
What kind of signals and encodings were used to send tilt/pan commands to TV cameras on the Moon (up through Apollo)?