Humanoid silhouette on SpaceX's Starhopper; what does it represent?

update: The silhouette now has a page in Wikimedia Commons: https://commons.wikimedia.org/wiki/File:Hughmann_for_scale.svg

Question: What does this silhouette of a bipedal individual designate? Is it related to these SpaceX-related markings or this SpaceX StarGrasshopper-related character? 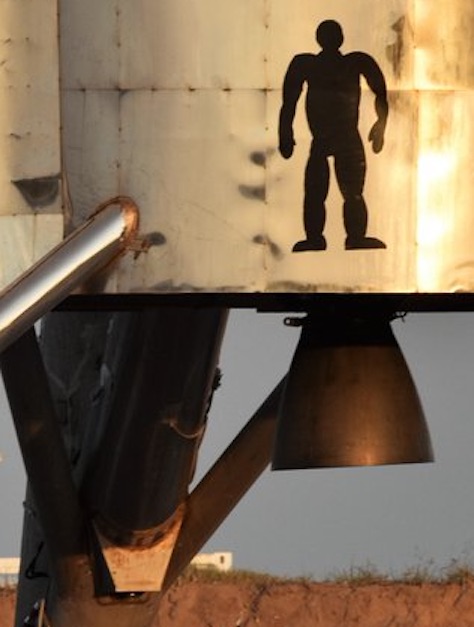 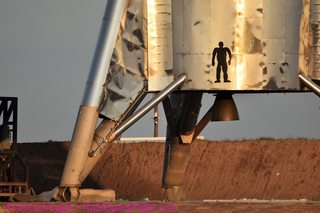 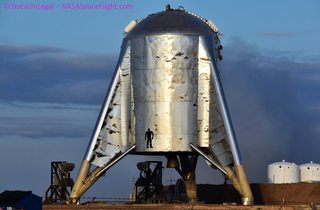 SpaceX has a history of using dummies/models/mannequins on the test vehicles.

Grasshopper, the Falcon 9 landing test vehicle had a cowboy mannequin strapped on for test flights. But the bulked up landing legs, had room to mount a dummie. Starhopper less so, and has a more powerful engine (when running with 1 and 3 are coming).

The Tesla Roadster launched on the first Falcon Heavy flight had a mannequin in a spacesuit (Starman) in the drivers seat.

(Cheese wheel on the first Dragon as a further joke, etc).

This is just a continuation of the man in the loop testing they have been doing.

Not the answer you're looking for? Browse other questions tagged spacex identify-this-object insignia hopper or ask your own question.

12
What do these markings on SpaceX's ship Mr. Steven represent?

6
What does the four-leafed clover on mission patches produced by SpaceX signify?
12
What do these markings on SpaceX's ship Mr. Steven represent?
1
What do these GPS-related emblems represent? Does one of them show “Marvin the Martian”?
3
What do these patterns on Virgin Galactic's VSS Unity represent, and how are they applied?
1
What is SpaceX's “rocket canister”?
18
What are SpaceX's Starship's header tanks?
2
What mission is this Chris Hadfield photo associated with and what is the location? And what is that thing?