How were the pins for Saturn V controlled release tested?

I came across the following section of the Saturn V Flight Manual (pdf): 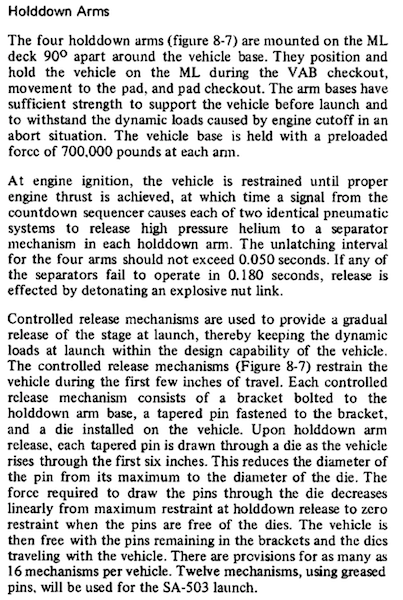 The intriguing part is that they used 12 pins to actually bolt down the Saturn V to the launch pad and the combined engine thrust would pull the pins through a die, gradually releasing itself from the pad, thus preventing a jolt when the holddown arms released.

I cannot find anything about a back-up for this (e.g. severing the pins with explosives), so it seems the principle was well understood. I'd image they'd want to test it anyway, but I fail to see how this setup can be tested without having an actual Saturn V, or at least the lower stage, providing the thrust. I can't imagine what that test rig would look like (except awesome), without being extremely dangerous.

On the other hand, not testing it seems also a big risk.

Question: how was this pin-through-die-based hold-down mechanism of Saturn V tested?

As I'm not a mechanical or rocket engineer, a possible answer can be along the lines of "it's a well known principle, applied many times, never fails".

This page describes in some detail the design of the holddown mechanism:

It doesn't say how they were tested but it says they were built by Space Corp. and where tested in Huntsville, with the final test being on May 25, 1965 and tested to make sure it could hold the thrust of 725,747 kilograms.

They didn't need to actually hold against the entire force of the engines because the weight of the fuel and rocket helped as well.

The first hold-down arm arrived at Huntsville on 31 October 1964, and testing began on 20 November. Due to a strike at a subcontractor's plant, the second arm, scheduled for delivery on 19 November, came on the 28th. On 17 May 1965, engineers tested the ability of the first hold-down arm to sustain a vertical thrust of 725,747 kilograms. After the successful completion of all other tests on this arm on 25 May, workers installed and aligned an operational set of hold-down arms on launcher 3 at KSC. The other hold-down arms were ready by the end of the year 38.

It is possible that reference #38 will have additional information, but this document is difficult to find online.

On PDF page 10 of a 92 page packet of notes dated March 1, 1965 with handwritten pencil annotations included some notes on test results, although no specifics on how the test was conducted:

4 SATURN V HOLDDOWN ARM FAILURE: At approximately 12 noon on 2/27/65, a Saturn V holddown arm failed while being tested for stress and deflection under an upload condition. The failure of the upper link occurred when the arm had been uploaded to approximately 1,400,000 pounds. The test criteria calls for the. arm to be uploaded to a maximum of 1,600,000 pounds.

The casting material of the upper link of the arm has an ultimate strength of 178,000 p.s. i. Strain gauges on the link in the vicinity of the failure indicated stresses well below this value just prior to the time of failure.

A photograph is attached showing where the failure occurred. (ATTACHED to DR. VON BRAUN’S AND MR. WEIDNER’S COPIES ONLY.)

We are presently working with KSC and Materials Lab of P&VE to determine reason for failure. 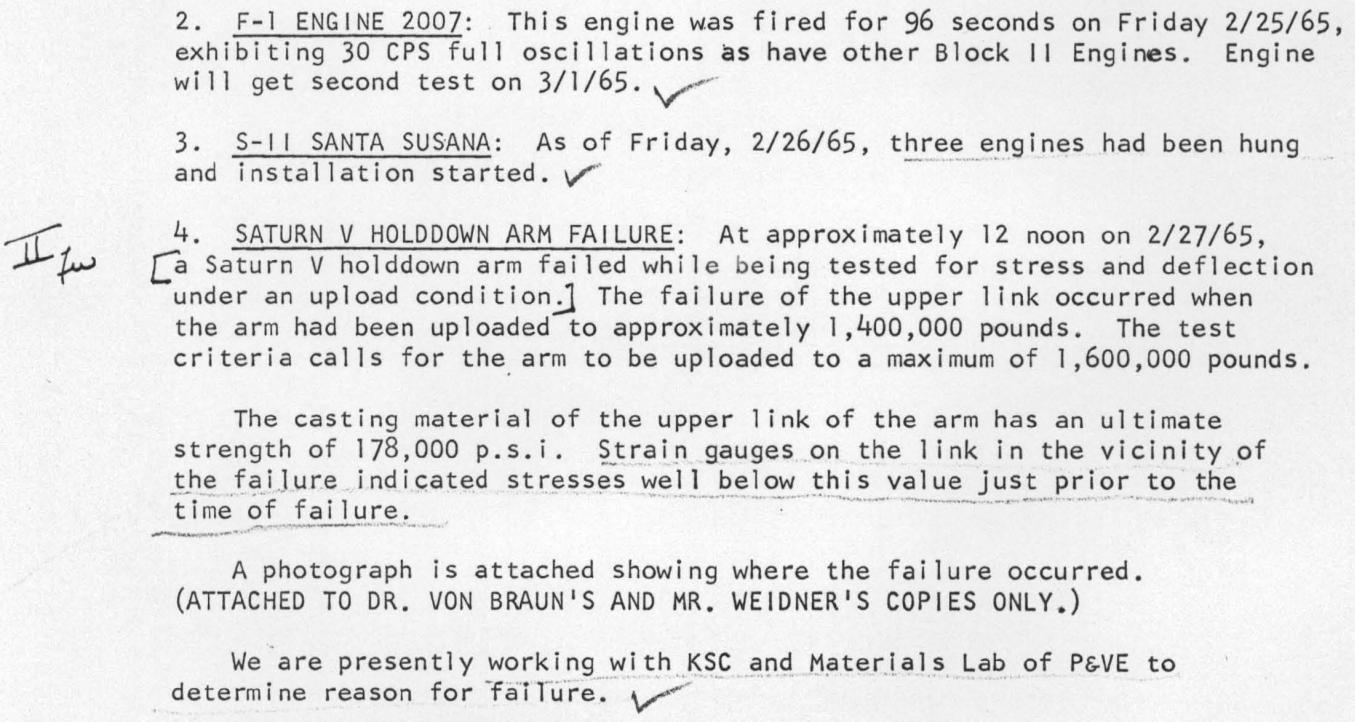 This conference paper (full proceedings can be found here) describes the holddown design in a bit more detail, including a detailed drawing of the controlled release mechanism (i.e. the pins in question) and the remark that: 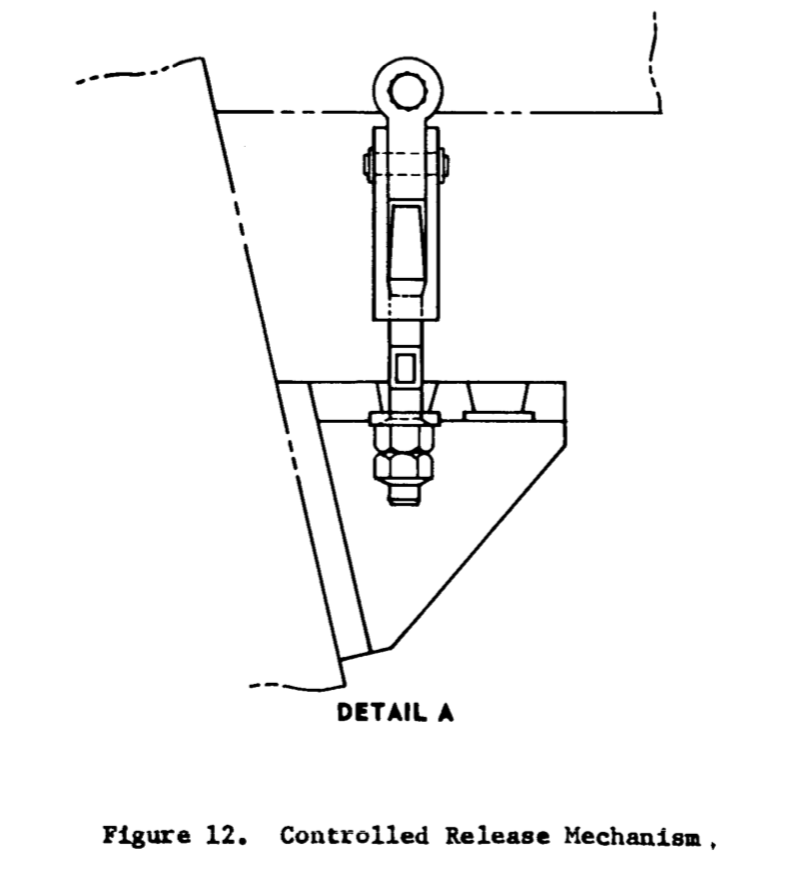 The picture shows the tapered shape of the pin and this paper suggest that already in the 1920s they had developed fairly accurate models for computing the force required for wire drawing given material properties and the diameter of the wire at both ends of the die. Hence, it is likely that they optimised the shape for a linear force relation with a sufficiently large margin on the required force to avoid the rocket to be "stuck" on the pad. A simple test with hydraulics or other means would quickly verify if the shape was correct.

Not the answer you're looking for? Browse other questions tagged saturn-v launch-sequence mechanisms or ask your own question.

7
Have any launch systems other than Saturn V used a controlled release?

16
In the Saturn V launch sequence, what defined COMMIT, and what happened between COMMIT and LIFTOFF?
7
How had the Saturn V lifting capacity changed throughout the Apollo program?
25
Were the Saturn V construction plans destroyed?
7
Saturn launch precautions for clearing tower?
5
How were the propellant pipes on the Saturn V LUT routed to the service arms?
4
Vented interstage for the final stage of Saturn V
12
Double redundancy for the Saturn V LVDC computer memory, how were disagreements resolved?
7
Have any launch systems other than Saturn V used a controlled release?
3
How were the ramps for the Zhurong rover stowed on the lander for flight?