Does the ISS yaw in orbit? And if so, why?

My understanding is the station is actively controlled to keep the nadir always pointing toward the Earth (belly down). This is confirmed by the post: Why does the ISS rotate exactly once per orbit?

Issue: Most animations show the ISS moving forward section forward, but during the course of one Shuttle flight, that does not seem to be the case, which may mean the station is yawed with respect to its zenith-nadir axis (either purposefully or due to some orbital mechanics).

For example, from the STS-115 presentation video at 4:36, the view shows the nose-up docked Shuttle moving bay forward, which means the station is moving aft section forward (Russian segment first). That's because the Shuttle was docked on PMA-2 (Destiny forward), meaning if the station is moving Destiny first, it would have been the Shuttle underside moving forward, not the bay door.

During the final fly-around days later at 12:43, the station is seen moving Destiny forward.

Q: Does (and why if yes) the ISS yaw in orbit? If not, how can that linked view (and others) be explained?

tl;dr During ISS assembly the station maneuvered more than it does these days.

You are correct that the docked Shuttle / ISS stack maneuvered during the STS-115 mission.

The planned attitudes for the last several Shuttle missions are available in the Attitude Timeline sections of their flightplans, published at the JSC FDF page. The STS-115 flight plan is here.

Referencing that (pp 4-5 and 4-6), we can see that for the majority of the docked phase the stack flew in a Bias -XLV -ZVV attitude, but maneuvered to a couple of XPOP attitudes for deployment of the solar arrays installed by the mission. 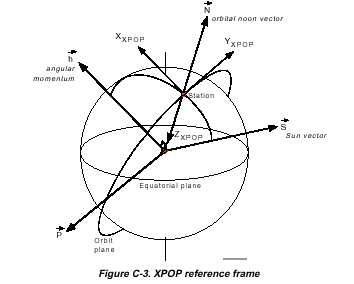 (XPOP description and image from here)

During the early, asymmetrical stages of ISS construction, various attitudes were used. Some other ones are discussed here. I can't find the attitude that the proto-ISS was flying in before STS-115 docking, but it was yet another attitude - the flight plan states "The shuttle will maneuver the stack into the Bias -XLV +ZVV attitude" after docking.

Not the answer you're looking for? Browse other questions tagged iss attitude or ask your own question.

23
Why doesn't the ISS orient itself to the Earth's magnetic field like a compass needle?
35
Why does the ISS rotate exactly once per orbit?
11
Why does the ISS always point the same side towards the Earth?
10
Could the ISS stop rotating wrt the stars for a few days, then start again?
3
ISS propagation becomes much more accurate with reduced drag. Any ideas why?
2
Zarya means "dawn". Has it ever faced the rising sun?

32
Will the ISS need more docking ports?
10
If NASA's plan is to launch 4 astronauts to the ISS on CCtCAP vehicles, why design for 7?
11
Why does the ISS always point the same side towards the Earth?
35
Why does the ISS rotate exactly once per orbit?
9
Can astronauts wear eyeglasses inside their helmets during launches and landings?
4
How should the ISS telemetry for attitude be converted to roll, pitch, and yaw?
12
How was the Space Shuttle Orbiter used for ISS Reboost?
6
ISS attitude yaw pitch roll conventions. Which one to use?
1
pitch, yaw and roll
4
Is the ISS going to yaw and assume the XPOP attitude for Nauka docking?