Why did the Vertical/Vehicle Assembly Building have four doors?

On this satellite image (credit: Google Maps) it is clear that only 3 out of four bays were ever used, since the 4th is not even connected to the crawlerway: 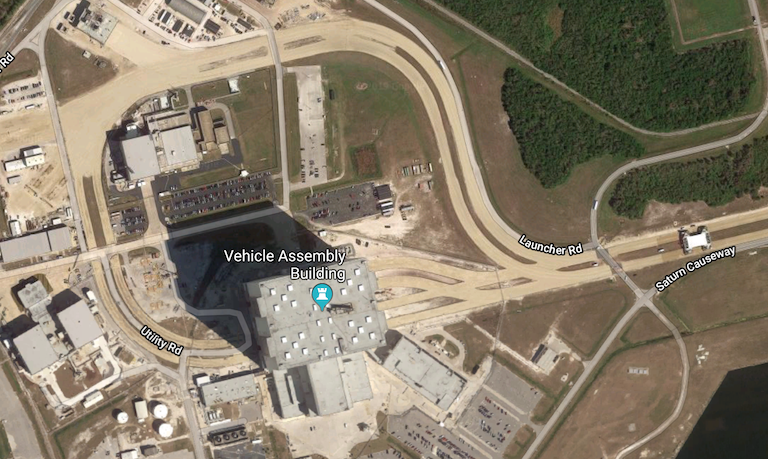 (Yes, I made the screenshot deliberately a bit too wide to have the crawler transporter in the image.)

Only 3 mobile launch platforms were made, and with only two launch pads, more than 3 don't seem necessary. So why the effort of building 4 bays - maybe next to each other to avoid the loop-around? Was the program budget already cut after the commissioning of the VAB? Was there an optimistic future use envisioned where they'd be launching Saturn-V rockets every other week? 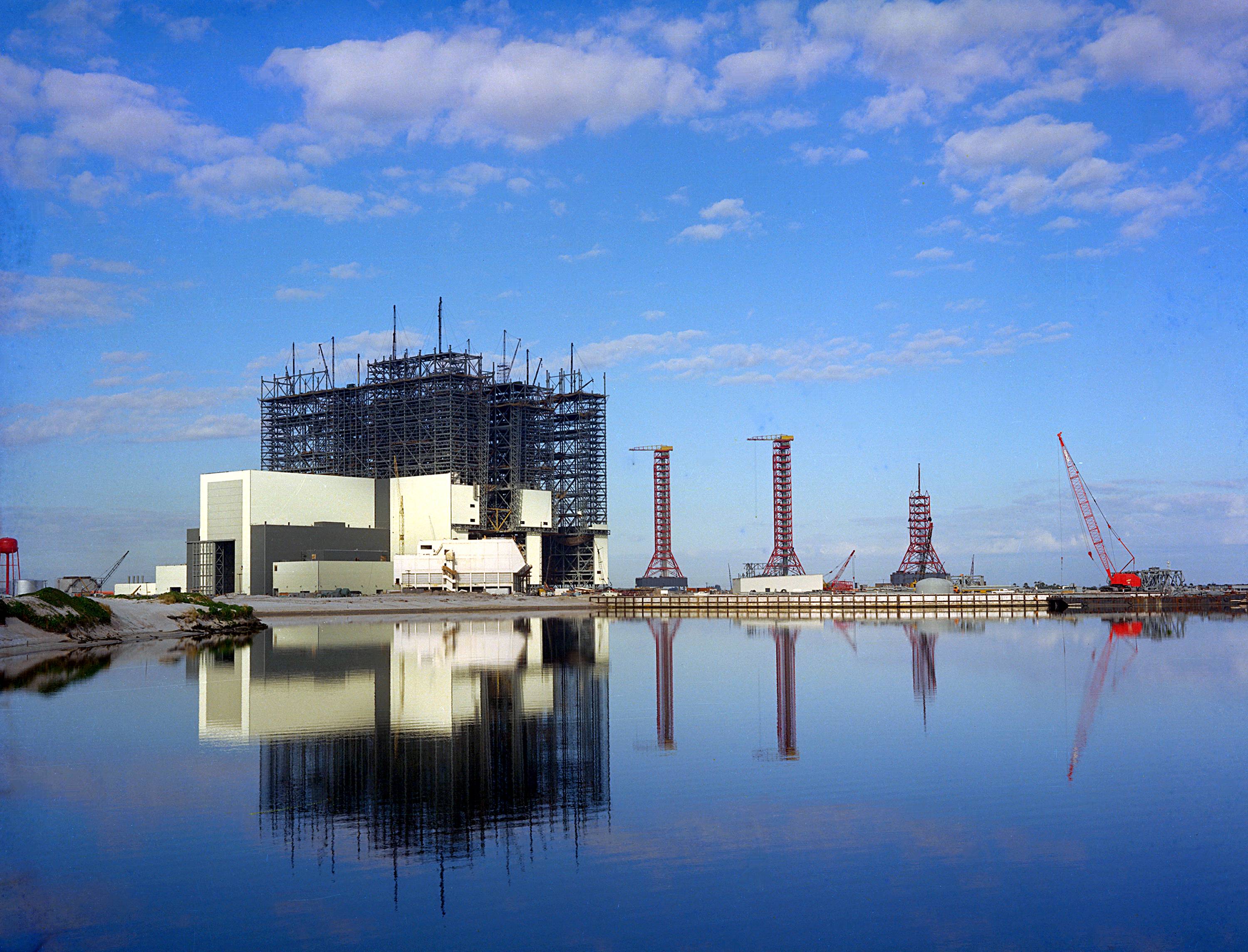 Question: what was the design decision driver to make the VAB with 4 bays?

There's a lot of background on VAB design in Moonport.

Your "optimistic future" is pretty much spot on - the original projection was for 36 flights a year! An early VAB design to support this had six high bays. 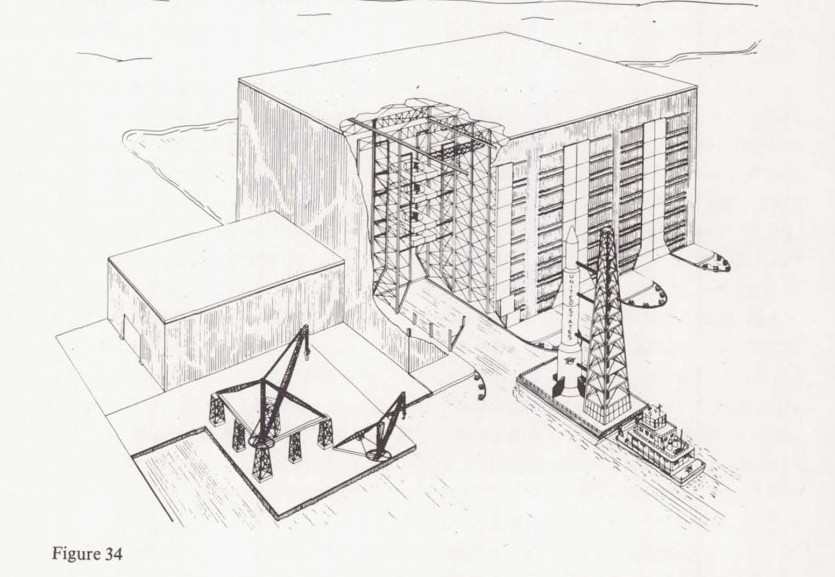 (six-bay design with barge instead of crawler)

After the annual flight rate prediction was reduced to 24, the design was changed to only have four high bays - but to not preclude the future expansion to six.

Likewise, the number of planned launch pads went from three to four to even five, but in the end only two were built. Here is a picture with four bays in the VAB and three launch pads, with a fourth one tentatively drawn in with dotted lines: 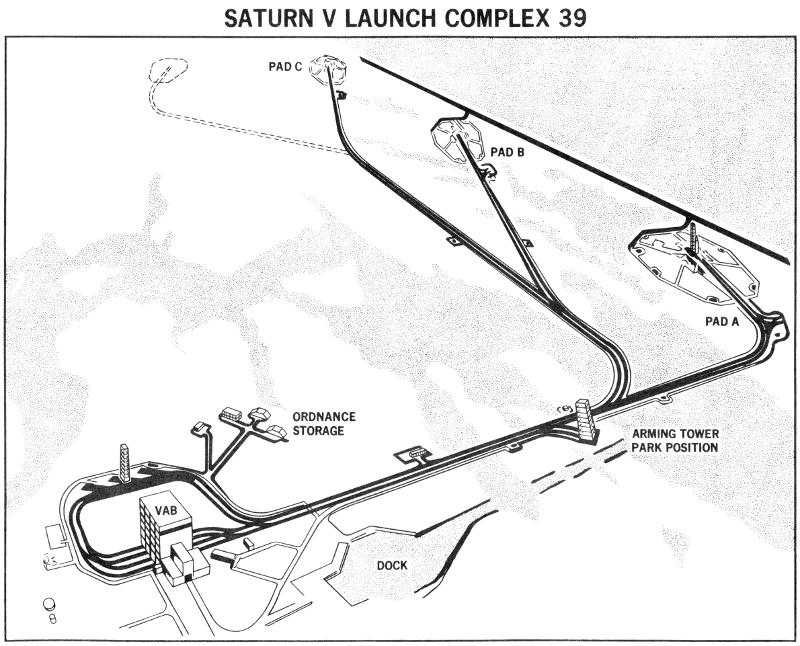 Not the answer you're looking for? Browse other questions tagged apollo-program kennedy-space-center vehicle-assembly-building or ask your own question.

6
Were all three Mobile Launch Platforms ever in use simultaneously?
2
Was the Apollo Programme the best option for long term space exploration?

21
Why did the Apollo Lunar Module have four landing legs?
13
Why did Apollo have a crew of 3?
32
Why were contact sensors put on three of the Lunar Module's four legs? Did they ever bend and stick out sideways?
4
What did the Apollo 12 multispectral Four-Camera system look like?
4
Why did Kennedy have four control rooms but Houston had only two?
28
How did they access the LM to mount the flag package while the Apollo stack was already on the launch pad?
3
Why did the Apollo lunar suits have two visors?